Whalen scored 17 points and a team high 8 assists in the win over the Los Angeles Sparks. 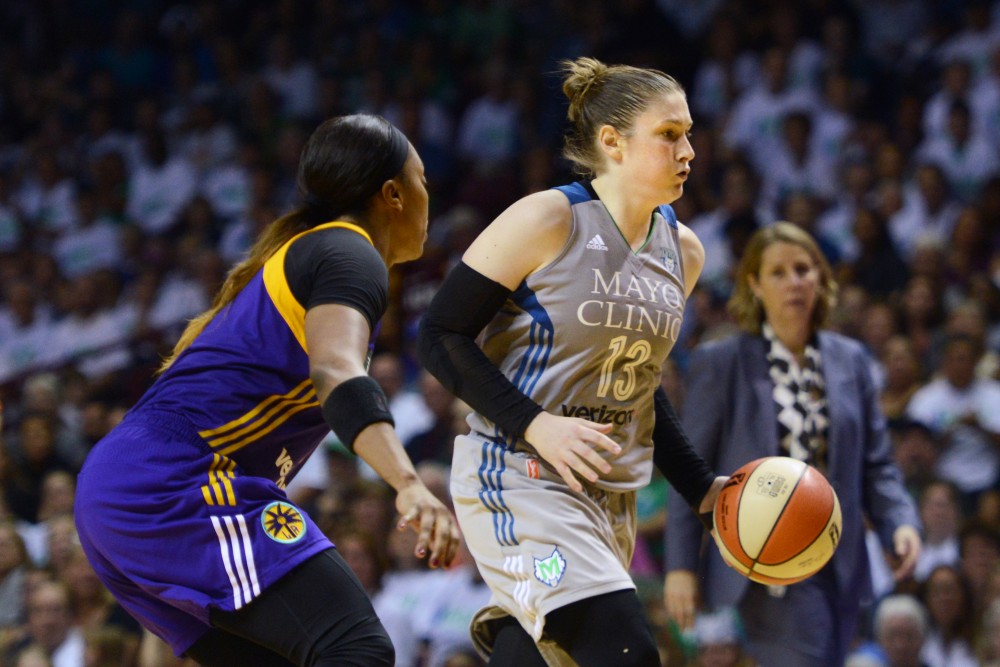 Lynx guard Lindsay Whalen carries the ball up the court during the first game of the WNBA Finals at Williams Arena on Sept. 24, 2017. Whalen helped lead the team to victory, scoring 17 points in the final game against the Los Angeles Sparks.

The Minnesota Lynx won the WNBA Championship over the Los Angeles Sparks at the University of Minnesota’s own Williams Arena Wednesday night.

“We knew we were in for a battle,” said Lynx head coach Cheryl Reeve. “At the end of the day, it’s players like Lindsay Whalen, who has a will to win that’s second to none.”

Whalen and the Lynx beat the reigning WNBA champions Wednesday night 85-76 at Williams Arena.The Lynx led the entire time, but the Sparks closed in towards the end of the game, and with just 34 seconds to play, the score was 79-76.

Lynx small forward Maya Moore hit a floater with 26.5 seconds left to give the Lynx a five point cushion. Then, for good measure, center Sylvia Fowles was fouled and hit her two shots while the crowd yelled “MVP,” which she was later named after the game.

The Lynx lost to the Sparks in last year’s WNBA finals by one point. They got revenge this year, as well as their fourth WNBA championship in seven years.

Whalen had 17 points Wednesday night and the most assists on the team with eight. She is known for her passing ability, and she has the most assists in WNBA history playoffs with 328. The second highest is Tamika Catchings with 223.

Wednesday night she played on the biggest stage in women’s basketball, playing on her college home court — Williams Arena. The atmosphere the capacity crowd brought to Williams Arena was loud and fiercely in favor of the Lynx.

“It’s just deafening out there, it’s so loud,” Moore said. “Whenever we did something great, even to start the game, you could just feel the energy in it.”

This is the first time the Williams Arena has hosted a professional sports event. The arena, which usually hosts Gophers men’s and women’s basketball, had to make some changes for the WNBA finals.

“A long time ago, I came to a lot of games here,” said Lynx and Timberwolves owner Glen Taylor. “I knew what it could be like. … When we did play here we saw the atmosphere was exactly what I thought it might be: very loud even though we didn’t have the college students at the end there.”

Williams Arena was outfitted for a WNBA finals this year with air conditioning and more staff. The usual home court for the Lynx, the Target Center, is undergoing renovations for the Timberwolves’ season. The Lynx played at the Xcel Energy Center in St. Paul during the regular season.

“We’ll probably go back to the Target Center because we’ve got investors, and we’ve got sponsors, we’ve got to hold them back,” Taylor said. “But this was a great experience, one that I don’t think our players or fans will forget.”

Moore had the most points with 18 and hit the cushion bucket with 26 seconds left to play. She has been with Whalen since 2011 — the first Lynx championship.

“Just to be able to finish it here, and for people to show up the way they did, shows that they don’t take it for granted either,” Moore said. “Just when you think it can’t get any better, we create a new memory in the house that [Whalen] built.”