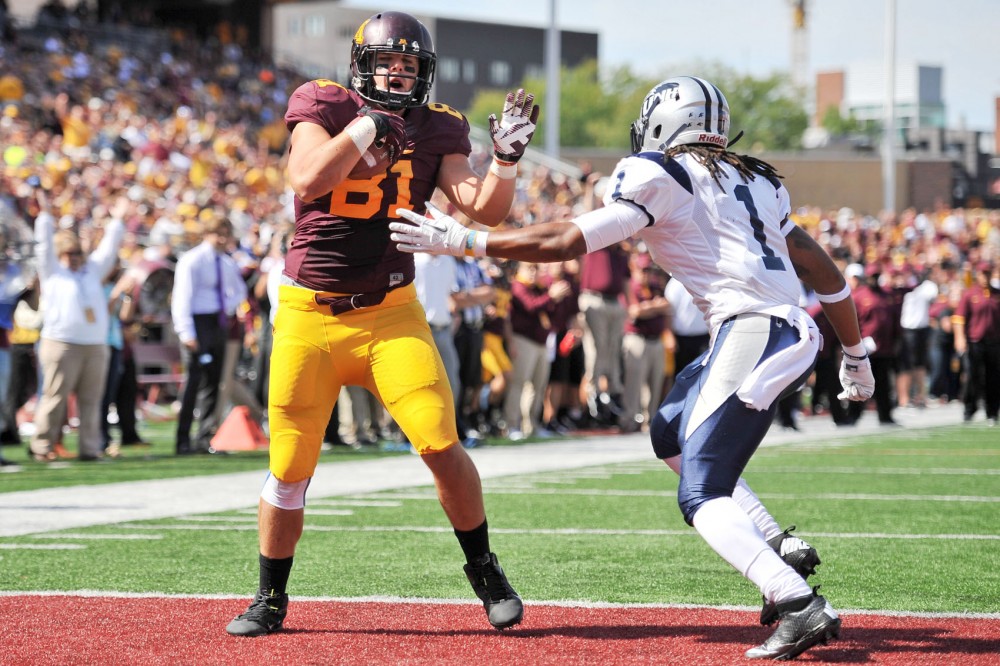 John Rabe energized a packed crowd of 47,022 fans at TCF Bank Stadium on Saturday — nearly 10 times the size of his hometown population.

Rabe has journeyed from being a star in his small town in Iowa to a formidable option for Minnesota’s offense. Yet he still flies under the radar.

Through two games this year, the senior tight end has grown into his role. Rabe caught three passes for 38 yards and a touchdown in the Gophers’ 44-7 drubbing of New Hampshire on Saturday.

It was his third touchdown of the year — more than he scored all of last season. He’s also eclipsed his previous totals in both receptions and yards.

“I always thought I had the talent to play at this level,” Rabe said. “I wasn’t given a whole lot of talent though. I had to work for it.”

He’s made a smooth transition from his role last year as a lead blocker in the backfield to the Gophers’ top tight end this season.

He’s watched Rabe dominate on the athletic stage since the athlete was in the fifth grade.

“It was one of the first times we had padded league football here,” Norem said. “Obviously his size stuck out, but … he was a fairly natural athlete at that age compared to everyone else.”

Rabe was a force at a young age, but as he matured he grew better, faster and stronger. He developed his skills and made the varsity team as a high school sophomore.

He played on the defensive line that year before he switched to linebacker for his junior campaign. He also dabbled at offensive guard for the team as a junior.

Rabe didn’t complain about the switch to the grueling guard position. He was a “team-oriented” guy, Norem said.

In his senior season, Rabe got the spotlight and stole the show. He starred at middle linebacker and tight end for Iowa Falls-Alden.

“He was a two-way player — an every-down type of guy,” Norem said. “He had the biggest impact on defense because he could make a play everywhere.”

Rabe was a first-team all-state selection at middle linebacker in his last high school season, when he collected 128 tackles and 11.5 tackles for a loss.

Despite his recognition as one of the top players in the state, he didn’t generate interest from big-name college programs.

Rabe was a three-sport athlete in high school. Norem said it may have hurt him in the recruiting process that he didn’t specialize in one sport.

He said he could have walked on at the University of Northern Iowa, but he decided to play at Ellsworth Community College in hopes of transferring to a Division-I program after two years.

“I was really close to pulling the trigger and walking on at Northern Iowa,” Rabe said, “but I ended up going to junior college, and that was the best decision of my life. It ended me up here.”

He made an instant impact his freshman year at Ellsworth. Rabe hauled in 25 passes for 488 yards and scored two touchdowns.

A year later in 2010, he led his team to a 9-1 overall record, and it finished the season as the 14th-ranked junior college team in the nation. Rabe collected 43 receptions for 406 yards and two touchdowns.

After completing his schooling at Ellsworth, he signed on to play at Northern Illinois University, where Jerry Kill was the head coach at the time.

However, when the Gophers hired Kill as their new head coach in December 2010, Rabe followed.

“I really wanted to play for Coach Kill, so it was a really easy decision once he offered me to come here, to follow him,” Rabe said.

Although Rabe said he transitioned well from junior college to Minnesota, he didn’t see much production in his first year with the Gophers.

He played in all 12 games, but he only caught four passes for 36 yards and two touchdowns.

This year has already been an upgrade.

“He’s certainly come up with some big plays and it couldn’t happen to a better kid,” Kill said. “We’ll continue to try and push the ball [to Rabe] … because he’s been successful.”

The 6-foot-4, 258-pound tight end has become a big red-zone target for quarterback MarQueis Gray — a security blanket that Gray relies on in big situations.

“He’s always there when we need him,” Gray said. “That big size, that big body, it’s hard for a quarterback not to see someone that size.”

Three of Rabe’s five receptions this season have been touchdowns.

“He’s one of those guys that defenses tend to forget about at times,” Gray added. “They tend to recognize him when he’s scoring those touchdowns.”

Nearly three hours south of Minneapolis in Iowa Falls, Norem watches Rabe and has his own “I told you so” moment.

“I talked to so many coaches and I just told them, ‘This is a guy that down the road you’re going to wish you had. He’s a diamond in the rough,’” Norem said. “They thought my emotions were in there and maybe didn’t trust my judgment, but I think — Iowa State, Iowa, [Northern Iowa] — all these in-state schools really missed out on a special player.”