Richard Pitino on his father: ‘I want what’s best for him, and that’s about as far as I’m going to go with it’ 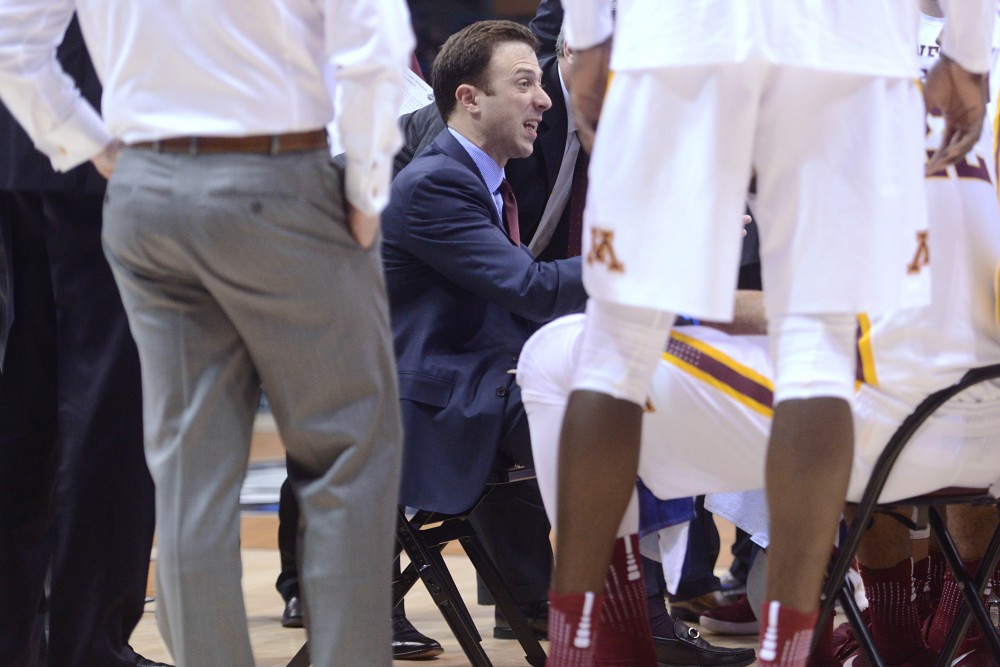 Head coach Richard Pitino talks to the Gophers during a timeout on Thursday, Mar. 16, 2017 in Milwaukee, Wisconsin at the Bradley Center. The Gophers played against Middle Tennessee Blue Raiders.

Gophers men’s basketball head coach Richard Pitino’s father Rick was put on unpaid administrative leave from the University of Louisville after allegations that he paid a recruit to commit.

“The biggest thing with that is it’s family, he’s my dad,” Richard Pitino said at the Gophers first official practice Friday. “I love him, I care for him, I want what’s best for him, and that’s about as far as I’m going to go with it.”

The Pitino case is the tip of the iceberg in a scandal involving a two-year FBI investigation of bribery in men’s college basketball.

According to CBS, an FBI criminal complaint states that sports agent Christian Dawkins, one of the biggest names in the scandal, talked to Rick Pitino about giving extra money to Louisville freshman Brian Bowen’s family. The FBI complaint also said Pitino talked to Jim Gatto, an Adidas executive, to get him to pay about $100,000 to Bowen’s family.

Louisville athletic director Tom Jurich was also placed on paid administrative leave. Bowen has been suspended from any basketball-related activities by Louisville.

“It’s been a tough week for our family,” Richard Pitino said at the press conference Friday. “I mean we all deal with it, to a certain extent, with family or whatever … so you just got to band together and be there for each other.”

Richard Pitino coached with his father at Louisville as an assistant from 2007-09, and as associate head coach in the 2011-12 season.

Richard Pitino said nothing like this scandal is happening at Minnesota.

Rick Pitino is a hall of fame basketball coach who, before Tuesday, had coached at the Division I level for 32 years. He has a 770-271 coaching record and two NCAA tournament championships, as well as 21 NCAA tournament appearances. He coached at Louisville for 16 seasons.

“You always know when tough times hit who’s got your back … and our family’s very strong,” Richard Pitino said.