Purchasers shelled out nearly $55 million for the building because of its prime location. 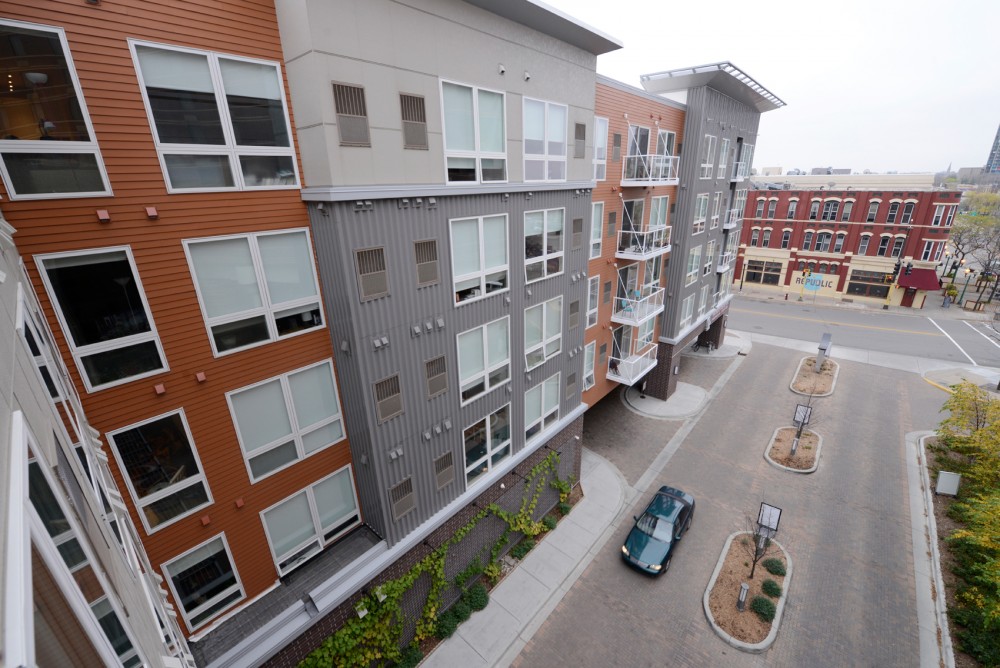 Nick Wicker
The first multi-family apartment in Minneapolis to qualify for a popular environmental certification sold for nearly twice its original value last week.
But the actual impact the distinction had on the sale of the University of Minnesota neighborhood building was minimal.
Washington-based developer Weidner Apartment Homes bought 7west Apartments — the first Leadership in Energy and Environmental Design Gold-rated building in Minneapolis — from TE Miller Development, LLC last Thursday for $54.5 million.
LEED, a four-tiered certification, is awarded to property owners who meet environmental standards like high air quality and use of sustainable construction materials and design.
Though Minnesota’s LEED chapter has been in existence since 2003, certified buildings will increase in popularity as millennials expect more environmentally friendly apartment designs, said research fellow Daniel Handeen of the University’s College of Design Center of Sustainable Building Research.
“We just expect it as a culture in the same way we expect to have furnaces now,” he said. “It’s part of the evolution of our culture.”
The sale is the newest in a string of 11 properties Weidner purchased in the Twin Cities area in about the last two years, said Greg Cerbana, Weidner’s public relations director.
“We don’t expect any big changes,” he said. “We think the staff [at 7west] is fantastic.”
The company chose the complex primarily for its large parking capacity and location, but 7west’s LEED certification also played a role, Cerbana said.
Still, Handeen said he doesn’t think the building’s green design upped its final price, instead pointing to the location as a main factor.
Stephen Burk, director of membership and development for the Minnesota Chapter of the U.S. Green Building Council, said following LEED standards can have positive effects on residents, such as improving health.
“All the materials that go into carpeting and paint and the material they use to build furniture and stuff is becoming healthier,” Burk said. “One of the things people see is … their allergies and asthma go away.”
While higher efficiency helps landlords save on utility costs, Hardeen said, they can use the designation as leverage for hiking up rent.
“They’re getting the benefit on both ends,” he said.
The standards for LEED update regularly to outpace normal housing and building codes, which usually catch up with LEED criteria every four to five years, Burk said.
He said one the standards updates happened at the end of October, and now, newly constructed buildings will fall under the updated version of requirements.
Though buildings can follow LEED techniques without formal certification, Minnesota USGBC Executive Director Sheri Brezinka said going through the process can add credibility to businesses that promise environmental friendliness.
Property owners submit applications and fees to become certified, and a group of third-party inspectors check the building for approval, Brezinka said.
The inspection usually takes several months, she said, but can be extended and cost more for developers if inspectors find design problems that need resolving.
She said the use of the standard has increased for multi-family housing complexes like 7west.
“I think it’s unfair to say that LEED certification is a buzzword in our industry,” Cerbana said. “It really is the future direction of most new construction projects.”
Delete Image
Align Left
Align Center
Align Right
Align Left
Align Center
Delete Heading