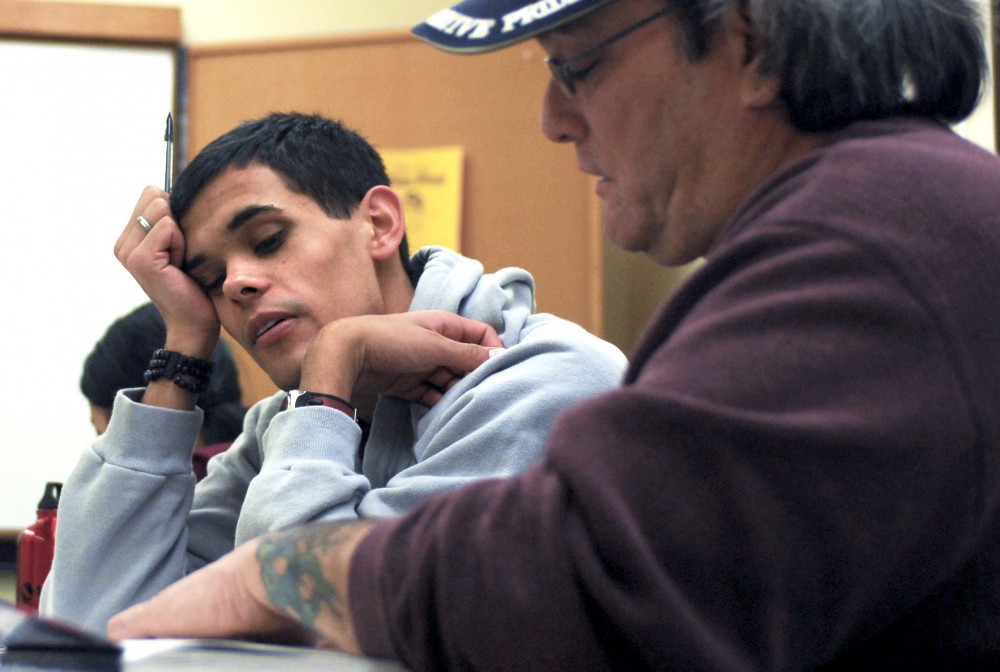 For first-year student Emily Huynh, chemistry hasnâÄôt been a breeze, itâÄôs been a struggle throughout the semester and Huynh said she knows she needs to study hard to do well on the final exam. Instead of waiting until finals week, Huynh and more than 50 other University of Minnesota students sought out tutors at the first Cram Slam session on Saturday. The second session is scheduled for Wednesday. The program, started by the Multicultural Center for Academic Excellence, is in its fifth year. It used to occur during finals week, but now takes place the week before. Patrick Troup, director of MCAE, said students wanted to get a head start on studying for math and science finals, which often come early in the testing line-up. He said students can work with other classmates and faculty members, as well as peer tutors. At SaturdayâÄôs session, eight tutors and one instructor were available in areas of math and science, but help was also offered for foreign languages and economics. WednesdayâÄôs session, Troup said, will be held in the SMART Learning Commons at Walter Library from 1 p.m. to 6 p.m. It will provide more help with social sciences and writing, along with the other main subject areas. Civil engineering junior Saura Jost works as a tutor year-round for the MCAE and said itâÄôs nice to be able to help students prepare for a test and perform better. âÄúTutoring does work,âÄù she said. âÄúItâÄôs a good environment for studying here because there are a lot of peer tutors.âÄù Although the name of the event is âÄúCram Slam,âÄù it aims to do just the opposite, Troup said. He said the goal of the event is to encourage students to start studying early to alleviate the stress that often happens during finals week. One-third of students who report being under stress say it impacts their academic performance, according to a 2007 study recently released by Boynton Health Service. Huynh said by attending SaturdayâÄôs Cram Slam, she avoided procrastinating and cramming the night before. âÄú[Cram Slam] is an alert,âÄù she said. âÄúYour finals are coming up and they are trying to prepare you ahead of time.âÄù Physics junior Jessica Santiago , who worked as a tutor Saturday, said she wished more students would utilize the tutoring services on a regular basis. Santiago said students feel much better after they get a question answered they were anxious about, and itâÄôs a good opportunity for her to review old subject matter. âÄúSome students come in thinking they wonâÄôt get their questions answered,âÄù she said. âÄúWe help them see the way and they leave with a clear understanding.âÄù Troup said the year-round tutoring and Cram Slam events are all about offering students the opportunity to get help with what they need. âÄúItâÄôs about being able to study together,âÄù he said, âÄúand create a sense of community.âÄù