“The Hills” in hardcover 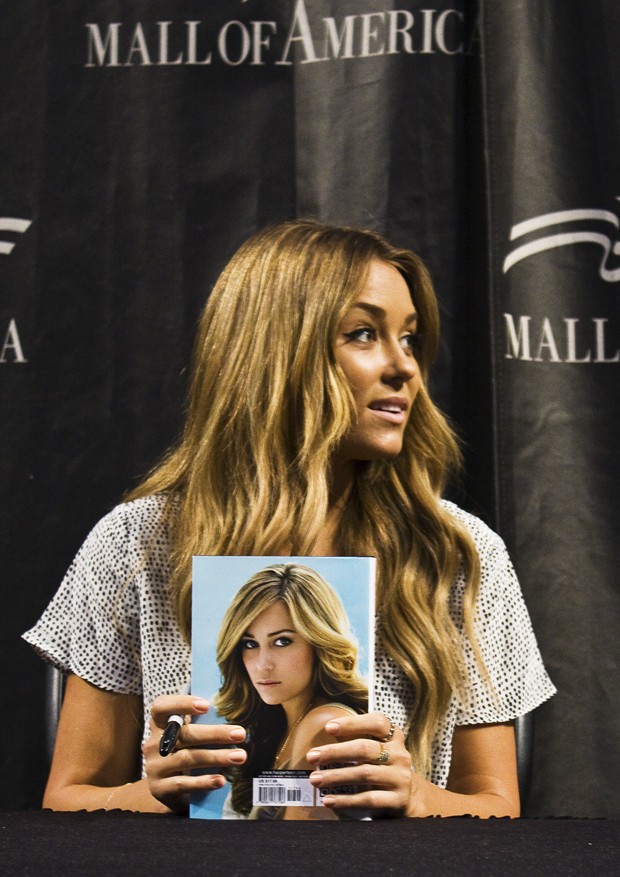 Conrad visited Mall of America this weekend to speak about "L.A. Candy."

âÄúL.A. CandyâÄù AUTHOR: Lauren Conrad PUBLISHER: Harper Collins PAGES: 336 PRICE: $17.99 Lauren Conrad wants us to think sheâÄôs a regular girl just tryinâÄô to get by in the big fishbowl we call Hollywood, but we arenâÄôt fooled. SheâÄôs just extraordinarily lucky, as evidenced by the fact that she can now add âÄúauthorâÄù to her list of occupations, which reads something like this: reality TV starlet/recreational fashion designer/Louboutin shopper/ex-girlfriend of seriously douchey guys. Lauren, who rose to fame as the star of MTVâÄôs duo of Ã¼ber-rich California kid reality TV shows, âÄúLaguna BeachâÄù and âÄúThe Hills,âÄù has a knack for accepting the goods offered on HollywoodâÄôs silver platter; her âÄúfashionâÄù line of simple jersey basics flew off boutique racks until girls noticed it was all stuff you could get at Forever 21, and her every move (plus those of Heidi and Spencer and Audrina and now alpha-woman Kristin Cavallari ) is documented on TV and in Us Weekly . LaurenâÄôs face (and boobs) beam from the cover of Cosmo politan, she reps mark cosmetics and teenybop magazines shill âÄúDress Like Lauren!âÄù spreads. Yep, face the cold, hard facts: sheâÄôs famous. And since sheâÄôs famous, of course she gets a three-book deal from the fine folks at Harper Collins. But can she write? DID she write âÄúL.A. Candy,âÄù or is there a 50-something man behind the curtain? âÄúL.A. CandyâÄù tells the story of 19-year-old Jane Roberts, a pretty blonde California girl who moves to Los Angeles for an event-planning internship and lands herself a reality TV show. Jane and her best friend Scarlett soon find themselves skyrocketing to fame and living the glamorous life in the city of angels. Sound familiar? Lauren swears the book isnâÄôt a thinly veiled autobiography, but IâÄôm not so sure. âÄúL.A. CandyâÄù is a roman Ã  clef of the highest order, though there are no Heidis or Spencers to be found within its pages. Like its author, thereâÄôs nothing remarkable about LaurenâÄôs writing style, good or bad. âÄúL.A. CandyâÄù is typical saccharine young adult fiction: beautiful girls dating beautiful boys in a beautiful city, jam-packed with cultural references and designer dresses. Therefore, itâÄôs perfect for her target audience of teenyboppers who enthuse over âÄúThe HillsâÄù and want to be just like Lauren. LaurenâÄôs namedropping California girl vernacular luckily doesnâÄôt begin to wear on the nerves. Jane is 19, after all, and of course new fame in L.A. is a blur of Marc Jacobs dresses and trendy clubs and bars. Jane is an unremarkable heroine who tries to be a witty and self-aware member of the Diablo Cody Club of Quips but doesnâÄôt always succeed. The secondary characters, like the firecracker Scarlett and the assorted love interests Jane encounters donâÄôt get enough space to develop fully, but since Lauren has two more novels about Jane and co. to pen, perhaps sheâÄôll get a chance to flesh them out. But if it is indeed Lauren writing âÄúL.A. Candy,âÄù she does try to make it worthwhile, though sometimes her similes and metaphors get clunky and her dialogue stilts. (For example, scotch runs down the producerâÄôs throat like a âÄúriver of warmth.âÄù) But itâÄôs not so bad âÄî like Lauren herself, itâÄôs harmless and cute. Lauren Conrad will never be Hemingway or Plath , but when it comes down to it, âÄúL.A. CandyâÄù satisfies its audiencesâÄô sweet tooth pretty well.