Minnesota lost to Cornell in its last meet before the Big Ten championships. 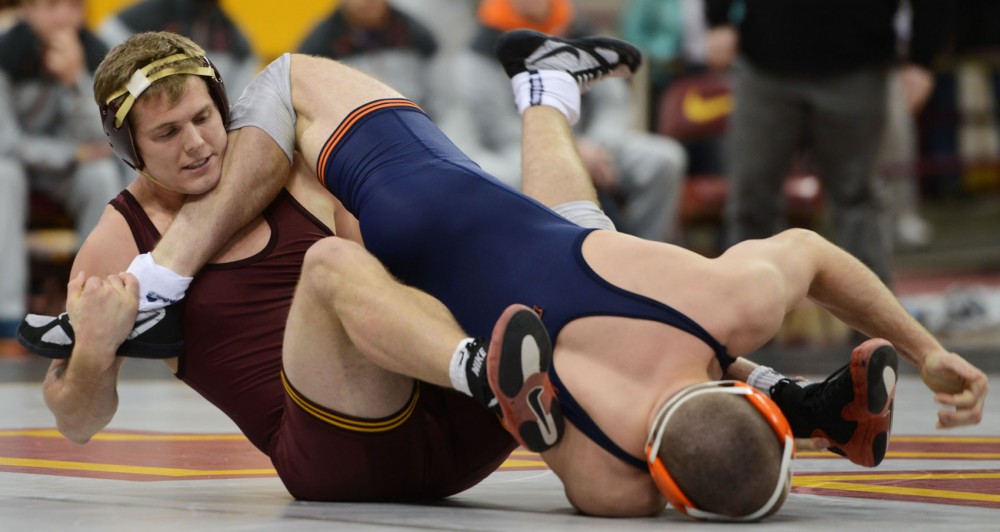 Senior Logan Storley wrestles against Illinois at the Sports Pavilion on Jan. 18.

It was supposed to be a run for a fourth-consecutive NWCA title.

But the No. 4 Gophers fell to No. 5 Cornell in the quarterfinal match.

The 19-17 loss came after Minnesota won 11 consecutive matches at the NWCA National Duals.

Head assistant coach Brandon Eggum said he knew Cornell would be tough going into the meet.

“We figured that a couple matches could’ve been swing matches,” Eggum said. “If you win them, you could win [the meet] comfortably.”

The Gophers dropped the first match of the meet at the 125-pound by a technical fall, but redshirt senior Chris Dardanes bounced back for the Gophers with a 7-4 decision.

With the victory, Dardanes is now 20-0 in the season.

Despite his regular season success, Dardanes said the next four weeks are the ones that matter.

“You can’t really be satisfied at all,” Dardanes said. “I just [have] to keep improving and coming into practice with the right mindset to prepare for the Big Ten [championships].”

Redshirt senior Dylan Ness suffered a surprising 9-3 defeat in the 157-pound match, ending a 26-match winning streak for the No. 1 wrestler in his weight class.

“I don’t think [Ness] wrestled his best match,” Eggum said. “When he is really basic with his defense and continues looking to score, he’s the best guy in his weight. I thought that there were a couple scrambles where he could have made better decisions.”

The Gophers were down 16-7 with four wrestlers remaining before they attempted a comeback.

Storley began the match with a scramble that gave him a two-point lead.

But after a late takedown by his opponent in the second period, the score was evenly matched.

Going into the third period with the score tied at 3-3, Storley took the lead after a re-shot before building up riding time for bonus points.

Storley wound up winning by a 7-5 decision.

He said he put his offense on his opponent, but he didn’t necessarily feel that he wrestled well.

“I didn’t wrestle the way that I wanted to today, and I am not that happy about it either,” Storley said. “It is what it is now, and there’s nothing that I can do about it.”

Eggum said Storley wrestled well in terms of a victory, but he thinks that the 174-pounder can compete at a higher level.

“I think Logan could’ve wrestled a better match,” Eggum said. “He’s got to force the action more and create opportunities where he could put up more points.”

Despite the criticism, Storley’s victory cut the Gophers’ deficit down 16-10.

Minnesota continued its come-from-behind effort, but the team came up short after winning two of the last three matches.

Eggum said it was disappointing not to win for the fourth consecutive year at the NWCA, but now the team has to move on and focus on what’s coming up — the Big Ten championships.

“I do think that team-wise we are a really good tournament team,” Eggum said. “I think we [have] guys that can really do good things at the Big Tens, and that should be our new focal point now.”