After recently celebrating his first year in business, SssDude-Nutz owner Bradley Taylor focuses on building relationships with the campus community. 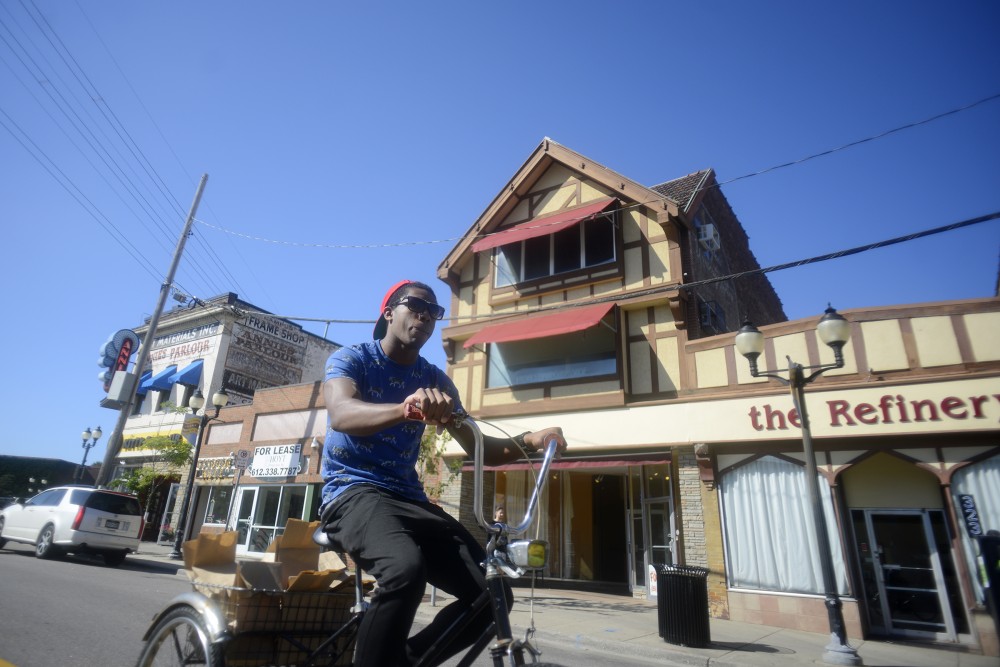 University of Minnesota alum and Sssdude-Nutz co-owner Bradley Taylor rides his bike to Open Streets Dinkytown to pass out free doughnuts on Saturday, Oct. 1, 2016 in Dinkytown. Sssdude-Nutz has just celebrated its one year anniversary and Tim Horton’s has signed a lease to move in next door.

With Canadian coffee and doughnut chain Tim Hortons set to move in next door, SssDude-Nutz owner and University of Minnesota alum Bradley Taylor isn’t worried about his business going stale.

“If you’re too busy trying to look in other people’s lanes, then you’re automatically going to fail,” Taylor said.

To stay ahead of competition, the shop has doubled down on marketing, hosting various events including a Super Smash Brothers tournament and a clothing-line release pop-up shop. And Taylor said he’s even let University film students use his shop as a backdrop to shoot movies.

“I think, definitely to just keep marketing, keep going hard, keep collaborating with a lot of the students like we usually do,” he said.

Taylor said, it can be difficult to run marketing campaigns, because he only has one employee working in the kitchen helping him make the shop’s doughnuts.

“It’s to the point where … it’s inhibiting me because I need to focus on building … relationships with … people,” he said, adding that rapport with community members will help grow the business.

Mike Corrao, SssDude-Nutz employee and University of Minnesota junior, said he doesn’t think the shop’s customer base will suffer from the new chain competitor.

“This is such … a niche doughnut shop that it won’t be too big of a deal,” he said.

And Corrao said he thinks Tim Hortons’ broad approach to the fare they serve won’t conflict with SssDude-Nutz’s business model.

“People come here when they want a cool doughnut,” he said.

But Randal Gast, president of the Dinkytown Business Alliance and co-owner of Qdoba, said it’s tough to speculate whether area businesses will succeed.

“The competitive landscape of Dinkytown continues to be a very fluid situation,” he said. “Restaurants come and go.”

There are always new competitors coming in which puts a lot of pressure on incumbent businesses, Gast said, though he said he doesn’t see Tim Hortons being able to match SssDude-Nutz square-shaped doughnuts since the chain likely already has a pre-established formula.

“[Taylor] has created a very unique, differentiated product,” Gast said. “I’ve never seen anyone else make doughnuts like that.”

If Taylor keeps distinguishing his business with a unique product, Gast said he will continue to succeed.

Aside from the businesses’ differences, Logan Jones, a University of Minnesota junior and frequent SssDude-Nutz customer, said he thinks Taylor knows the community better than an outside company does.

“I think that with the stuff that [Taylor] is trying to put out there now and get going, he has a lot larger … community base than Tim Hortons could have,” he said.

Jones said he doesn’t see a large business like Tim Hortons being able to match the shop’s ambience, adding that being at SssDude-Nutz feels like hanging out rather than shopping.

“It feels like you’re just going over to your friend’s house to hang out and play videogames who happens to have some doughnuts there,” he said.

As for what’s next, Taylor said he’s focused on having another strong year but prefers not to look too far ahead.

“I think that when you look too far ahead … thingsstart to become a little distorted,” he said.

The shop celebrated its anniversary at an event on Sept. 24. Taylor said he learned a lot during his first year and even turned a profit that was reinvested into the business.

“I think what was best in our first year was actually … putting ourselves out on the map … letting people know that, even though we are based in Dinkytown, we actually boast some really good product,” he said.

Taylor said he’ll continue to hand out free doughnut holes on campus every Wednesday and may eventually look at doing pop-up shops in places such as Uptown and Northeast Minneapolis to expand the business’ reputation.

“That’s part of what I really want to do, is just build a community around this place,” Taylor said.