Jordan Lynn has used sports to cope with his parents’ deaths. 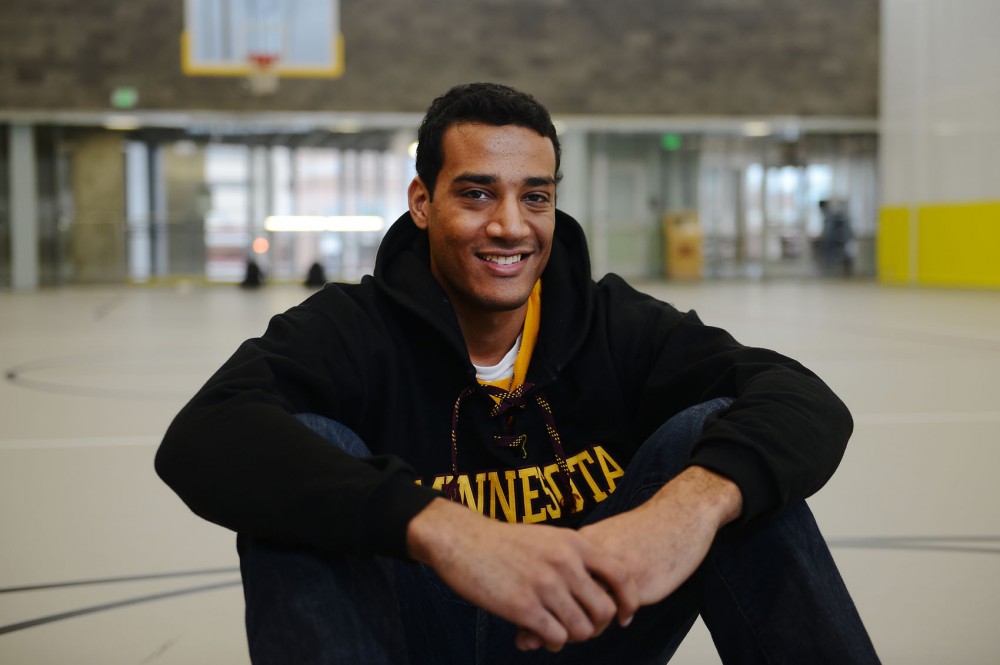 Sport Management senior Jordan Lynn tried out for the Gophers basketball team Oct. 2, 2013. Lynn has practiced with the team but is unsure if he can commit to this season.

This year, Jordan Lynn has the chance to do both, but his parents aren’t here to see it happen.

Lynn, a University of Minnesota sport management senior, lost both parents in a nine-month span during the last year.

“It didn’t feel real,” he said. “You never think that stuff can happen.”

Lynn is heartbroken. He’s confused. And he’s set to graduate in May.

“However he’s doing it, it’s amazing to me,” said David Breitenbucher, Lynn’s high school basketball coach. “I just can’t imagine being at the end of college and having both my mom and dad gone.”

Lynn’s resume is brimming with internship experience. And now, he has the chance to add to it by living out a childhood dream.

On Oct. 2, the 6-foot-8-inch Lynn was one of 18 players who tried out for the Gophers men’s basketball team.

Two days later, coaches invited him back to The Barn to practice with the squad.

But Lynn, the oldest of three siblings, is now the de facto leader of his immediate family and must attend to responsibilities that most 21-year-olds can’t imagine.

After a handful of practices, Lynn notified Gophers coaches of his family situation and requested time away from the team to evaluate his personal life.

Though he wasn’t guaranteed a spot on the roster, Lynn said the coaches were sympathetic and told him to take his time before returning to practice.

Now, he must decide whether he can become a full-time basketball player while being a full-time family man.

“I’m just going to take some time to examine what’s going on,” he said. “I have to make a decision pretty soon.”

Lynn was adjusting to life as a college student — he was a freshman living in Comstock Hall — when his mom told the family she had salivary gland cancer.

“I had been going back home a little bit before that,” Lynn recalled. “After that, I was going home every weekend.”

While the news of his mom’s illness affected Lynn, he said her grab-life-by-the-horns approach and positive attitude helped the family remain optimistic about her chances to beat the disease.

Lynn said she was still going to work and maintaining a normal schedule.

“You hear people, they beat cancer,” he said. “You hear stories like that.”

His mom’s demeanor was encouraging enough that Lynn wanted to live on campus again his sophomore year. But plans fell through, and he had to commute.

Though he was initially disappointed, Lynn said it was the best possible situation.

“Looking back on that … I got to spend every day at home,” he said. “I got to see my mom every day.”

Lynn’s mom drove him to school regularly and worked a consistent schedule until mid-summer 2012. But over time, the radiation and chemotherapy zapped her strength as the effects of the illness developed.

Lynn’s close friend and former roommate Shaquille Lee said the normally reserved Lynn opened up for the first time during that summer.

“Things hit him more. They affected him more,” Lee said.

On Oct. 21, 2012, Kelly Lynn died with her closest family members at her bedside.

“When it happened, I couldn’t think of anything,” Lynn said. “I forget how long it was before I went to school.”

Lee sympathized with Lynn but was careful to make sure his friend had time and space to go through the grieving process.

“He grew out a beard. I had never seen him have a beard ever,” Lee said. “He just looked like he needed some time. I understood.”

The Lynn family rallied together, and Jordan Lynn returned to campus a few weeks after his mom’s death.

“He wanted to handle it on his own for the most part, but he still wanted to be around [friends],” said Brandon Clayton, another of Lynn’s former roommates. “He wanted to have contact with individuals so he could escape his thoughts.”

Lynn finished out the 2012-13 school year. By the end of spring semester, he said, he was more accepting of his mom’s death.

“My mom was a big supporter of my education,” he said. “She wouldn’t want me to drop out. She wanted me to graduate.”

In the spring, Lynn’s dad and siblings moved down to Arizona in hopes of a fresh start.

Jordan landed a game-day operations internship with the St. Paul Saints and stayed in the Twin Cities to work over the summer.

Though he was working more than 50 hours a week, the beginning of Lynn’s summer was smooth.

His dad, who had battled asthma much of his adult life, had a serious asthma attack July 6. Minutes later, he had a heart attack and ended up in critical condition.

Lynn caught the next flight down to Arizona to be with his family.

“Most of the day was sitting in the hospital, talking with doctors, trying to figure out what was going on,” he said.

He was unconscious for almost two weeks and awoke in a vegetative state.

“Our dad told us when our mom was going through it that he didn’t want to live on machines,” Lynn said. “We knew all along what he wanted. … Ultimately, it came down to his children to make the decision.”

On July 21 — exactly nine months after Jordan lost his mom – Charles Lynn was taken off life support. He died a few days later.

Jordan Lynn and his family remained in Arizona for a couple more weeks.

As the new head of the family, Lynn dealt with the aftermath of his dad’s death. He didn’t delve into specifics, but said he’s been working with lawyers to resolve some “legal and financial issues.”

In mid-August, he and his siblings decided to return to Minnesota.

When he came home, he was ready for school.

“He couldn’t wait for school to start because school could help him take his mind off of things,” he said.

Breitenbucher, his high school coach, said Lynn was a dirty work specialist who made a living on the offensive glass.

Division II and III programs showed interest in him, but he chose the University of Minnesota to focus on academics.

“He was happy with my decision,” Lynn said. “He knew that I was always more the school kind of guy.”

Still, Lynn wasn’t content with giving up his basketball dreams.

He said he was in contact with then-Gophers head coach Tubby Smith’s recruiting coordinator about possibly walking on as a freshman, but Smith’s staff didn’t add additional walk-on players for the 2010-11 season.

Lynn quickly established himself as a regular pickup basketball player at the University Recreation Center and in the University’s intramural leagues.

“He’s dunked on so many people up there,” Lee said.

Lynn said basketball has been an emotional outlet in the last year.

“I just try to keep myself busy doing stuff,” he said. “I know it’s not the best thing to keep it all bottled up.”

Lynn said he wasn’t in top basketball condition at the time of the tryouts. He spent a week doing light conditioning, including sprints and jogging on a treadmill.

At his season-opening press conference, Pitino said he’d be willing to add one or two walk-ons, and the team could use another big body.

That night at tryouts, Lynn showed up — all 6 feet 8 inches of him.

At the tryout, Lynn showcased his length and athleticism with a chase-down block, he said. Lynn said he got tired during the 30-minute tryout but felt good about his performance overall.

Gophers coaches called Lynn and guard Jasen Baranowski back to practice that Friday.

Though he had to tell the Gophers coaches he needed some time away, Lynn said he’s still considering returning.

Regardless of his final decision, he said participating in the tryout and practice is a victory for him.

“I thought about [my dad] when I found out about [the opportunity],” he said. “The fact that I tried out — he would have been happy about that and be proud.”

Lynn is set to graduate in May with a degree in sport management.

He communicates regularly with his 19-year-old brother, who’s working full time in Minneapolis, and his 17-year-old sister, who’s living with friends and finishing high school at Park Center.

He said he’s proud of how they’re handling the tragedy and that they’re “taking more responsibility.”

And for Lynn, it’s still not easy.

“People told me the memories — they hurt now, but they’ll be comforting later on,” he said. “It hasn’t got to that point yet. It still hurts trying to think of stuff.”

But he’s found refuge in his passions.

He’s completed internships with the Saints and the Minnesota Timberwolves, and he’s hoping to parlay his degree and experience into a career in sport management.

His dream job, he said, is to work in the digital media department of a professional sports franchise. He said his parents were both very creative and influenced his career choice.

“My mom told me before she passed away that she wanted me to stay in school,” he said. “My dad, before he passed, he told me he was proud of me and said … no matter what, he’d make it back for my graduation. I don’t want to not graduate now.”

Editor’s note: Lynn’s siblings were not interviewed for this story at his request.