The junior right winger has scored 11 goals this season. 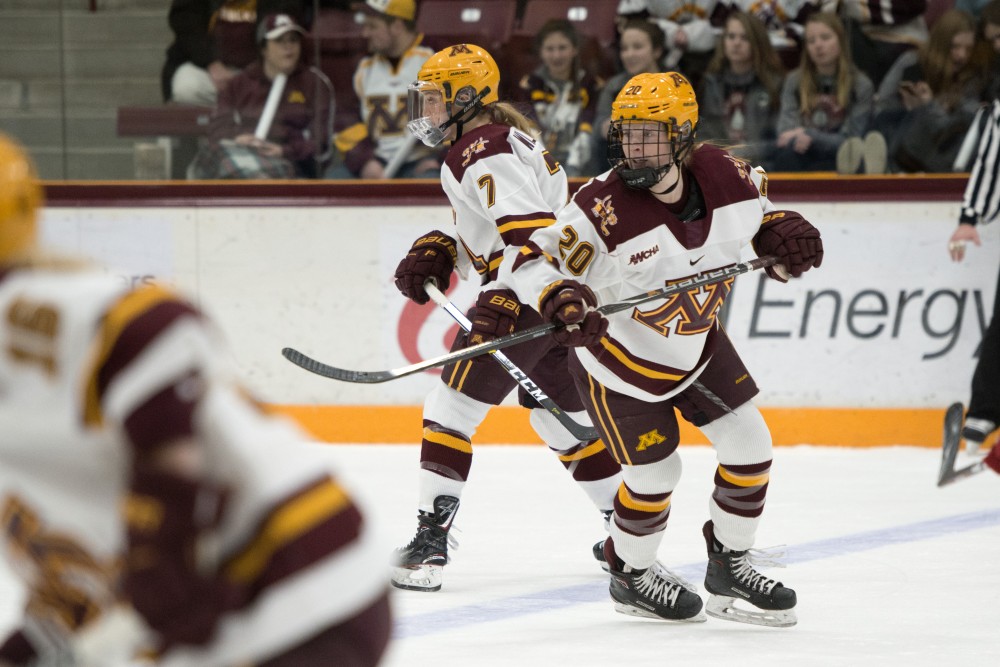 Junior forward Alex Woken eyes the puck during the game against Wisconsin on Jan. 18, 2019 at Ridder Arena.

As soon as she stepped on the grounds of the University of Minnesota, right winger Alex Woken knew she wanted to study science.

Both of her parents work in health sciences; her mother is a physical therapist and her father is an athletic trainer. Woken said she was always fascinated by the brain, which is why she is majoring in neuroscience with plans to attend veterinary school after she graduates.

“Coming into college, I was more set on going to medical school and working with people,” Woken said. “I don’t know what pushed me towards vet school over med school. As for neuroscience and vet school, vet school is like medical school. You can pursue any major as long as you get the prerequisites. … I don’t see myself working on the brains of animals.”

Head coach Brad Frost said Woken is a brilliant student who is disciplined as a player and a person.

“She’s incredibly smart [and] gifted academically,” Frost said. “She’s a smart hockey player and that’s why we can put her on different lines.”

Woken’s 11 goals are tied for second on the team. She has two multi-goal games this season: one on Nov. 2 and the other on Jan. 25.

Woken currently plays on a line with Gophers captain Kelly Pannek and left winger Taylor Williamson, but has played with others, including center Taylor Heise.

Heise said Woken is a role model who sets a good example for the rest of the team.

“When you see her, she’s out there early, stays late,” Heise said. “She’s got a great attitude and always comes to play. She works so hard. She makes a point to go out there and prove to other people that she can always be better every day.”

Defender Patti Marshall won multiple national championships with Woken when the pair played for Shattuck-St. Mary’s in Faribault, Minnesota. Marshall has known Woken since she was about 9 years old.

“She’s a very self-driven, motivated person,” Marshall said. “A lot of people need someone pushing her, but she’s the exact opposite. She’s the one leading the pack and pushing everyone. She’s the one pushing me in school and on the ice.”

Woken doesn’t know what will come after she completes her undergraduate education. For now, her goal is to help Minnesota win its eighth national championship, the fifth in eight seasons.

“We want to finish the season as strong as we can to put ourselves in a position to make a run for it in the playoffs,” Woken said. “Each game is so important no matter what team we’re facing. Every team that we play [is] going to give us a game, which is so fun. The competition that’s in the WCHA this year makes it fun to come to the rink.”

David Mullen contributed to this story.