Andre Hollins traveled to Italy to study, maintaining his commitment to academics. 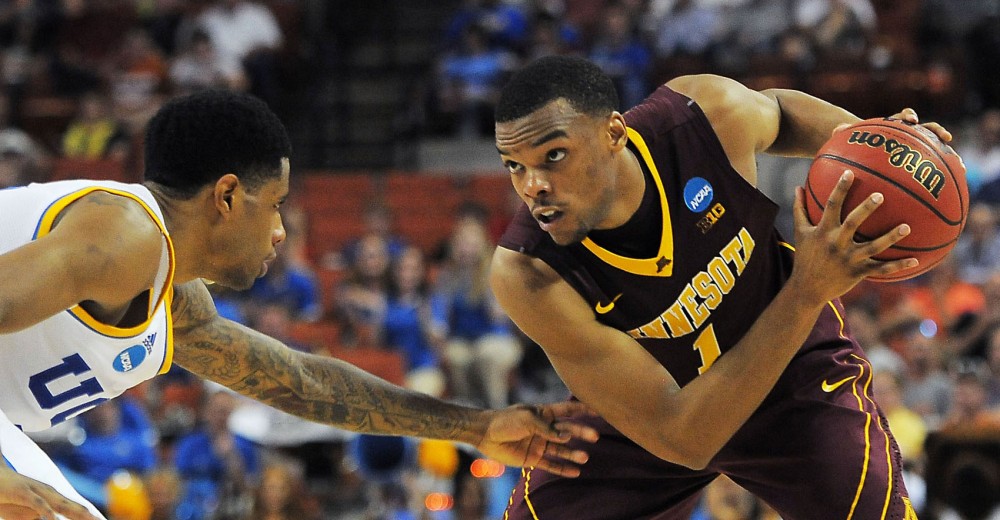 Minnesota guard Andre Hollins (1) looks for an opening Friday, March 22, 2013 at the Frank Erwin Center in Austin, Texas. Required by Carlson students to study abroad, Hollins recently studied in Italy in the beginning of the summer as part of a course on food sustainability.

But he probably hasn’t seen many players like All-Big Ten guard and Carlson School of Management junior Andre Hollins.

“You walk into the Carlson school, and Andre’s picture is up on the wall,” Pitino said. “He’s kind of like the spokesperson for it.”

Carlson students are required to take a trip abroad, so Hollins and junior teammate Elliott Eliason traveled to Italy at the start of the summer as part of a course on food sustainability.

“It was an amazing experience,” Hollins said. “It was kind of life-changing.”

The experience may have cost him a spot on the USA Basketball team at the World University Games in July.

But Hollins is used to balancing school and basketball. He graduated from high school with a 4.8 GPA and considered attending Stanford because of its strong academics.

During the season, his rigorous coursework in Carlson and practices can be tough to juggle.

“It’s all about time management,” he said. “Getting the proper amount of rest, make sure I’m eating right … getting all my study hours in and at the same time spending extra time getting better on the basketball court.”

Hollins didn’t play a lot of basketball in Italy, and it showed upon his return. He was cut from USA Basketball’s final World University Games team, which held tryouts a week after Hollins returned home.

The junior said his game was rusty and his muscles “just weren’t there” during tryouts.

“I told him, ‘You’re not going to make the team. It’s just too difficult. You were gone for a month,’” Pitino said.

When asked about his trip, Hollins talked first about what he learned and how much he enjoyed his professor, Michael White.

White has led the trip six times and said he doesn’t think he’s had a scholarship athlete. He said both Hollins and Eliason were “fantastic class participants.”

“I thought that Andre was very, very engaged and very interested,” White said, “As we got deeper into the subject matter, he got more and more excited about it.”

White said the nearly four-week  trip to Sicily and Rome included visits to an organic farm, a fish market, a pistachio producer and a vineyard.

Hollins highlighted trips to the Trevi Fountain, the Pantheon and the Colosseum.

The junior said he had the opportunity to play basketball only a few times, including once with Eliason and a group of junior high-aged Sicilian students.

Hollins said he often had to resort to running through Sicily’s hilly terrain for exercise. He said he experienced more of the student perspective of college without his normal athletic obligations.

“We were busy during most of the day, so I really couldn’t separate time for athletics,” he said.

Now, Hollins is transitioning from a student abroad to a student of Pitino’s new up-tempo system. He appears to be catching on quickly.

“I’m really getting a lot [more] comfortable,” he said. “It’s summertime, we’re having fun and we’re getting better.”