Morgan Bohl was recruited as an outside hitter but transitioned to the Gophers’ defense. 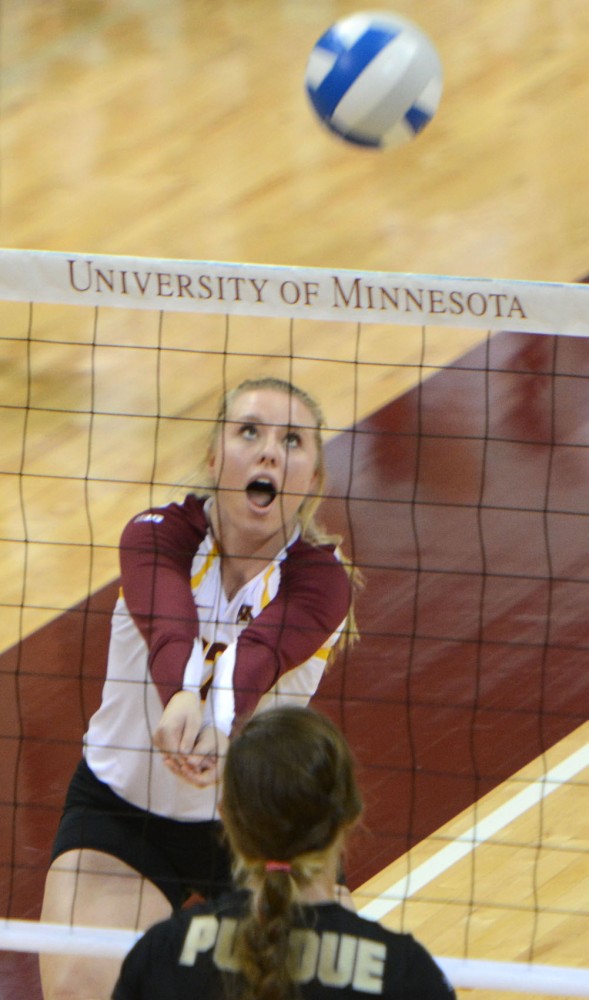 Gopher's Morgan Bohl bumps the ball back to Purdue on Saturday, Sept. 28, 2013, at the Sports Pavilion.

For a position that isn’t even counted as an official starter, the libero offers more than the stat sheet shows.

Although a libero’s main statistical category is digs, her impact on the game can far exceed a simple bump.

And after two seasons on a “libero carousel,” it looks like the Gophers have found their starter — at least for now.

“I think Morgan’s been a little more stable and a little more steady in a few more phases of the game that are important for that position,” head coach Hugh McCutcheon said. “She’s been getting some good reads and getting into good spots. Right now, Morgan is getting the job done.”

Through the 17 sets she’s played this season, Bohl hasn’t made a receiving error and has a presentable two digs per set.

But while she’s making an impact on the court this year, her career at Minnesota didn’t come without a rocky start.

Her senior year of high school, she said, she tore her anterior cruciate ligament, medial collateral ligament and meniscus.

With an injury many doctors call the “unhappy triad” or a “blown knee,” Bohl was forced to sit out her first year with the Gophers.

“I didn’t have the jump back and the kind of blocking skills necessary to be a hitter,” she said.

But she still excelled at one skill: passing.

She was recruited as “a six-rotation hitter,” and she said her passing is what caught the coaches’ eyes.

“When I came here, they saw I could pass, and they looked at me more as a libero,” Bohl said. “So I think it’s been a great transition.”

Bohl appears to have found her niche this season, and her teammates have taken notice.

“Every day in practice, she comes in ready to compete because I think she knows that no spot is set, and every day you have to work for it,” sophomore setter Karyn Israel said.

Bohl found her way into the lineup late last season, but Lawmaster still opened this season as the starter.

McCutcheon said Lawmaster earned the spot at the beginning of the year, but Bohl has come on strong lately. He said the libero competition is open, and Lawmaster will have a chance to win the spot back if the opportunity arises.

But until that opportunity comes, it looks like the spot belongs to Bohl.

“The main appeal was that she was steady, [and] consistency in that position is a big deal,” McCutcheon said. “So she did a nice job in serve and receive. But … defensively, she was able to play within the plan a little bit better. Those things really ended up being the difference for her.”