No. 9 Minnesota takes on No. 12 Oregon in the first round. 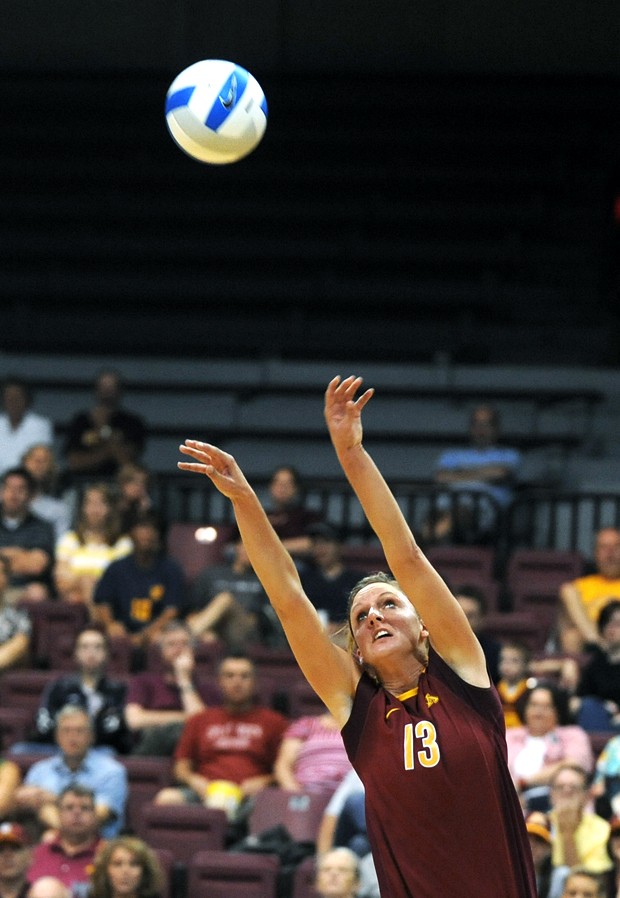 The No. 9 Gophers volleyball team finishes up their non-conference schedule this weekend as they head to Denver for the Pioneer Classic. Minnesota (7-2) will start the tournament playing No. 12 Oregon on Friday night at 6 p.m. The Gophers then play a double-header on Saturday, first against Georgia Tech at 2 p.m. and then against tournament host Denver at 8:30 p.m. The Gophers are coming off a hot and cold weekend in which they lost to No. 3 Washington in three sets, but later beat South Florida in straight sets at the Tampa Twice Tournament. The win kept Minnesota ranked No.9 for the second consecutive week. “We started the season with a goal of being at least 9-3 going into the regular [conference] season, but I think going into this tournament we’ve changed our perspective and would really like to go 10-2 overall,” senior Christine Tan said. Leading the way for Minnesota is the dynamic junior duo of Brook Dieter and Lauren Gibbemeyer. Dieter is leading the team with an impressive 3.77 kills per set average. Gibbemeyer is averaging 2.7 kills per set as well as 1.5 blocks per set. Fifth-year senior transfer Megan Wilson has also been playing well for the Gophers as she continually makes her presence more known. Wilson is coming off a strong performance in which she had 16 kills combined in the matches against Washington and South Florida and was named to the all-tournament team. The Friday matchup against Oregon should hold the toughest challenge of the weekend for the Gophers. The Ducks are a perfect 7-0 and have lost only two sets so far on the season. Oregon is led by seniors Sonja Newcombe and Neticia Enesi. Newcombe comes to Denver averaging 3.64 kills per set, while Enesi averages 3.09 kills per set. Senior Nevena Djordjevic is averaging a notable 11.39 assists per set. “Oregon is going to be very difficult,” Gophers Head Coach Mike Hebert said. “They’re another Pac 10 team, they hit the ball real hard, they’re very mobile on offense and they run a lot of misdirection patters, so it’s really going to test our blockers.” Minnesota kicks off Saturday against Georgia Tech (7-2) who is coming off a four set win over Mississippi. Georgia Tech features a strong scoring trio of senior Chrissy DeMichelis, sophomore Bailey Hunter and freshman Monique Mead who combine to average 9.08 kills per set. The last time the Gophers and Yellow Jackets met was in the Sweet 16 of the 2004 NCAA Tournament. Minnesota won in five sets, but that match is still best remembered for the marathon fourth set in which Georgia Tech won 48-46, an NCAA record for most points scored in a single set with a 30-point scoring format. The Gophers finish up the weekend against tournament host Denver (3-7). The Pioneers are led by senior Emmy Davidsmeyer who averaging 4.53 kills per set and junior Kresson Vreeman and her 9.86 assists per set. The three matches in Denver cap off a five game road trip for the Gophers, who have only played three of their first 12 games at home . With so many away matches so early in the season it may seem like a handicap for a Minnesota team trying to build for a season long fight, but the Gophers see it another way. “If anything it’s helped us,” Hebert said. “We’re not going to be too nervous or uncertain when we hit the other arenas in the Big Ten because we’ve already played in front of big crowds in the non-conference period.”