Neighborhoods are worried about safety, parking and traffic issues on games days. 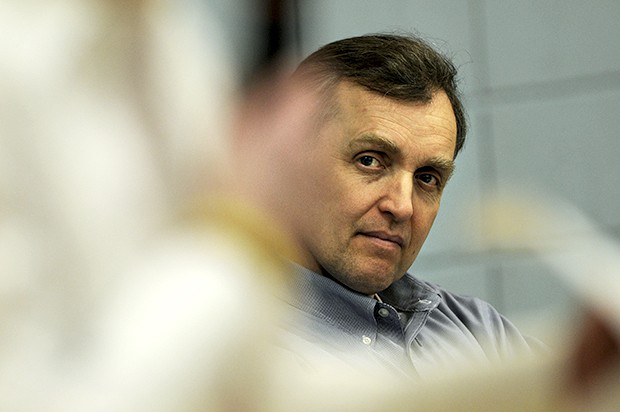 Ward 2 City Councilmember Cam Gordon looks on as Jen Hollerand, not pictured, talks about the new stadium parking plan during a joint Ward 2 and 3 meeting on Wednesday at the Van Cleve Park’s gymnasium.

Game days at the TCF Bank Stadium could draw more than 50,000 spectators, employees and tailgaters to the area when it opens this fall. At a meeting Wednesday, students and residents from neighborhoods surrounding the University of Minnesota voiced concerns about the parking, traffic and safety issues that will come with the crowds.

Safety
Robert Skomra, 2nd precinct inspector with the Minneapolis Police Department, said he is seriously concerned about the MPDâÄôs ability to handle security issues that will spill out of the University and into communities on game days. âÄúWe cannot handle the issues on game day with current staffing,âÄù he said, adding that the police force could be cut further as the city of Minneapolis reviews its 2009 budget. Skomra said that party patrols may also be âÄúout the windowâÄù with the current limited funds. Greg Hestness, University police chief, said they plan to have about 20 officers out on game day to handle security, but strategies still need to be made for other safety measures. Several members of the Greek community also raised concerns about safety for fraternities and sororities near the stadium on game days. Hestness said University police will patrol as much as they can, and suggested that Greeks hire private security. However, several Greek members said it is financially unrealistic to hire private security for every stadium game day.
Parking
Residents from the Southeast Como area and several members of fraternities expressed concern for traffic and parking management on game days. Dan Luedtke, a member of the Sigma Nu fraternity, said he is worried about the number of students and visitors who will be driving and walking along University Avenue, where the fraternity is located. The University has not finalized plans on how to manage traffic on game days, but is working with the city of MinneapolisâÄô public works on developing a system. Season ticket holders will be given a parking voucher along with their tickets. However, about 20,000 other visitors will be forced to find parking in various East and West Bank parking lots, the State Fair Grounds and onto city streets. Ricardo Cervantes, Minneapolis deputy director of licenses, said the city does not want residents lawnâÄôs to become a parking lot, and will be strictly enforcing parking laws during game times.
Tailgating
The University is still working to finalize its plans on tailgating, but Lynn Holleran , chief of staff at the University, said they are fairly certain they will allow tailgating on campus surface lots. Though as far as off-campus tailgating goes, Minneapolis is not planning on extending its tailgating parameters farther than the current areas near the Metrodome. Establishments surrounding the University are generally not interested in bringing tailgating into their parking lots, Cervantes said, because they do not think it will be advantageous to business. Although no plans are completely set for how the city and University will handle game day operations, 3rd Ward Councilmember Diane Hofstede said the purpose of the meeting was to facilitate a discussion between University and community members to address concerns. âÄúWe are looking at each otherâÄôs rules and discussing changes that we or they will need to make,âÄù she said. âÄúSome of the best ideas we have come out of these meetings, and IâÄôm hoping that we can learn what issues are really concerning community members and work toward solutions.âÄù