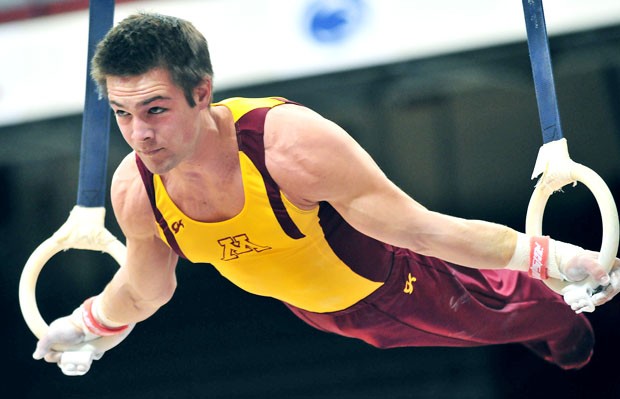 Four Gophers gymnasts have already started competition in one of the most respected and rewarding gymnastics tournaments this time of the year. Three are going for their very first time and two are freshmen. The name and location says it all: the Winter Cup in Las Vegas, Nevada. Freshmen DJ Repp and Russell Dabritz, junior Cole Storer, and senior captain Kit Beikmann travel to the city of lights not planning on doing gambling of any sort. The stakes have been raised for these Minnesota standouts, however, as they will encounter the nationâÄôs top gymnasts. But the grand prize would be unforgettable: a spot on the US National team. Despite the fierce competition that the four will undoubtedly face on Saturday, assistant coach Kotsya Kolesnikov believes one of the 15 spots available could be claimed by one of his gymnasts this weekend. He believes in all four, including the freshmen. âÄúEven though Russell and DJ are two freshmen on the team [and] theyâÄôre young, those guys have enough talent to be there and compete in a pool of the best of the best,âÄù Kolesnikov said. With such the level of competition in such a grand event, it is hard for Kolesnikov and the rest of the Gophers to predict how their teammates are going to place. But these four have already proven themselves this year. Beikmann will surely put on a pommel-horse display, and Storer has even come close to making a spot on the National team. More than anything however, according to Kolesnikov, Minnesota will show up, perform and let the world know what to expect for the 2009 NCAA Championships here at the Sports Pavilion. âÄúIf you look on the larger picture of this completion, we have to be visible in the nation as the University of Minnesota gymnastics,âÄù Kolesnikov said. Last weekend, the womenâÄôs gymnastics team achieved their biggest highlight of the year with a 195.575 score at Oklahoma . The Gophers again bettered their previous weekâÄôs score by a point, and lost by less than a point to the then No. 7 Sooners . It can be sure the womenâÄôs gymnastics team is also hungry for the grand prize this weekend when they host Iowa State. A win over the 0-4 Cyclones would give even more of a boost to an already humble team and end a 3-meet losing streak.