The University of Minnesota's Computer Science and Engineering launched the Emerging Scholars Program in response to a lack of women in the engineering. 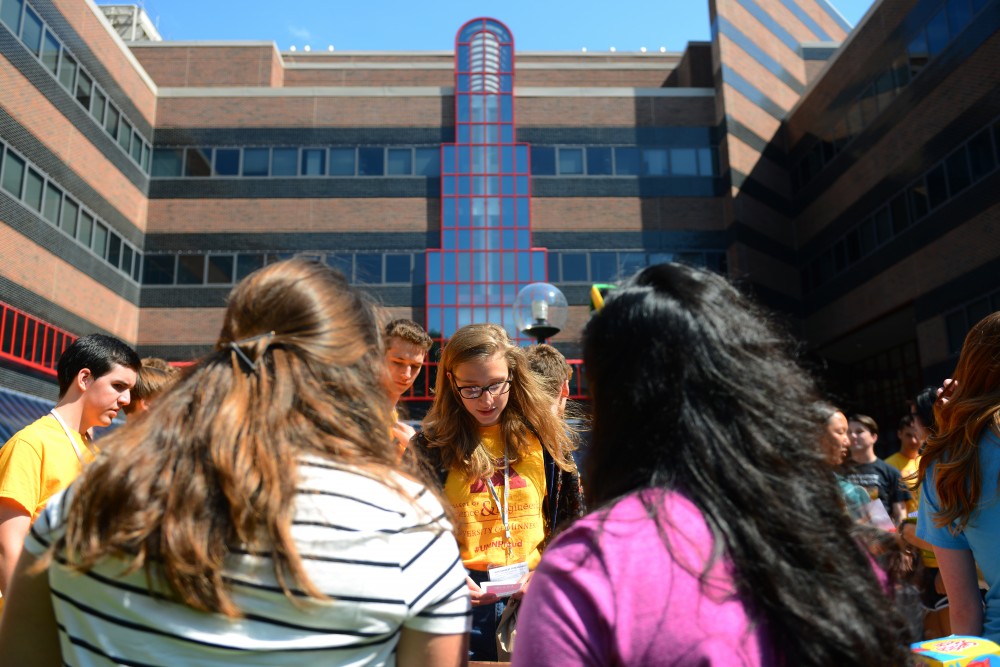 Freshman Elsa Forberger, center, speaks to Ellie Burns, left, and Ashmita Sarma about the Association for Computing Machinery for Women on Thursday, Aug. 30 outside of Lind Hall on East Bank. The College of Science and Engineering held an activities fair for incoming freshmen.

Faculty members at the University of Minnesota are hoping to support the next generation of female scientists and engineers through a new diversity program.

The Emerging Scholars Program, which was launched at the beginning of the fall semester, will bring together female students and other students from diverse backgrounds to cultivate a sense of community, provide resources and encourage collaboration within the engineering field. The program is funded by a grant from the National Center for Women and Information Technology.

Influenced by their own experiences of sometimes being the only female in a class, Maria Gini and Shana Watters, founders of the program and faculty members in the University’s Computer Science and Engineering department, said they wanted to combat feelings of loneliness that can accompany this by providing a welcoming environment in the program.

The program was created in part as a response to the low percentage of women and people of color in the computer science field. Women account for around 16 percent of undergraduate students studying in the CSE department at the University, according to data from Peterson’s, LLC.

“Having diversity is critically important in computing,” said Mats Heimdahl, head of the CSE department. “If you have diversity, both in terms of racial diversity and gender diversity, you get better decision making and better functioning teams.”

Combining Gini’s research expertise and Watters’ teaching skills, the two faculty members began collaboration on the program in the fall of 2017. The two say they are hoping to expand the program following the current year-long pilot run.

“We all have great gifts and abilities and we all think differently,” Watters said. “In order to create a society that is operating at its best, you don’t want to leave anybody behind because everybody has the ability to contribute.”

The pilot program is one of multiple programs at the University promoting females in computer science.

“It’s important to know there is a voice supporting women in computer science,” said Ashmita Sarma, vice president of the Association for Computing Machinery for Women. “When you’re one of a few, it can be hard to reach out to people without feeling uncomfortable.”

“It’s important for people to know their allies,” she added. “It will help by offering an environment where you don’t have the same pressure as your classes.”

To ensure varying perspective among members of the Emerging Scholars Program, Watters and Gini have designated two peer-leaders to help mentor women in the program.

Emma Schildgen, one of the program’s peer leaders and a sophomore in the CSE department, said she is looking forward to providing mentorship similar to her own experience.

“I have had a lot of people help me over the years and I have always wanted to help women be more involved in computer engineering,” Schildgen said. “I think [the program] will be a good way for students to make bonds with one another.”