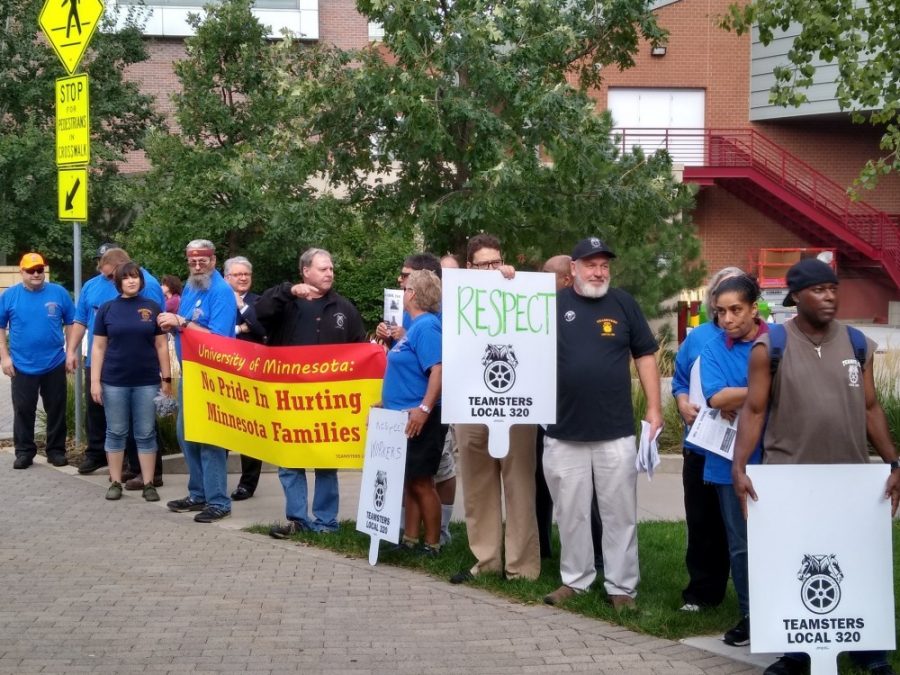 Unrest grows as union groups at the University of Minnesota continue demonstrating to express discontent with contract negotiations.

AFSCME Local 3800, a clerical workers union at the University, and the Teamsters Local 320 union demonstrated with signs and matching shirts as President Joan Gabel walked down Scholars Walk during her inauguration Friday, Sept. 20. Protests are ongoing and are the result of weeks of discontent as contract negotiations with the University continue. Unions members are claiming their contract demands are not being met, citing low wages and inadequate annual raises. The University is following the typical process for these negotiations and expects a collective bargaining agreement to be reached.

AFSCME President Cherrene Horazuk said the union isn’t happy with inequities within their job classification that they say they feel University administration tends to overlook.

”It is not uncommon for things to reach a pretty heated level, we’re not at that point right now but I would say the perspective of the administration … is one that frequently is disrespectful to front line workers, to clerical workers in particular,” she said.

A statement sent to the Minnesota Daily from University spokesperson Meagan Pierluissi said the appropriate representatives are meeting with the unions during the negotiation process.

“Appropriate University representatives have been part of scheduled and planned labor negotiations, as is the typical process,” the statement reads. ”We believe in the negotiation process and have every reason to believe that it will lead to a collective bargaining agreement.”

Horazuk said one of AFSCME’s main concerns in negotiations is the step progression system, which rewards workers an annual increase in wages. They are trying to shorten the amount of time it takes to get to the top pay grade.

“You kind of work undervalued until you reach the top,” Horazuk said.

John Budd, a professor of work and organizations at the Carlson School of Management, said the step progression system often causes disputes.

“After a specified amount of time, typically 12 months, that employee automatically moves up to the next step [of pay],” he said. “I think this is frequently an issue of contention between the University and unions.”

AFSCME Vice President Stephanie Taylor said AFSCME members have been pushing to meet with Gabel to express their concerns.

“Contract negotiations are the most important part of our year this year in terms of actually trying to advocate for ourselves and advocate for what our membership is demanding,” Taylor said.

AFSCME emphasizes that clerical workers are a predominantly female workforce, and they stand for equity and fair treatment, Horazuk said.

Teamsters members said they demonstrated at Gabel’s inauguration to increase their visibility to the University community. The union had another negotiation session with the University on Sept. 19.

The University’s Office of Human Resources said in a statement to the Minnesota Daily that the collective bargaining agreement between the Teamsters and the University expired on June 30, and is valid until a new agreement is reached.

“We believe in the negotiation process and have every reason to believe it will lead to a collective bargaining agreement. No timeline has been set,” the statement reads.

AFSCME has negotiation dates set with the University in October, Horazuk said, and they are planning to distribute buttons, hang posters and try to engage with multiple groups in the University community in the coming weeks.