The measure would fundamentally change how the University handles the funding for student groups and extra-curricular activities. 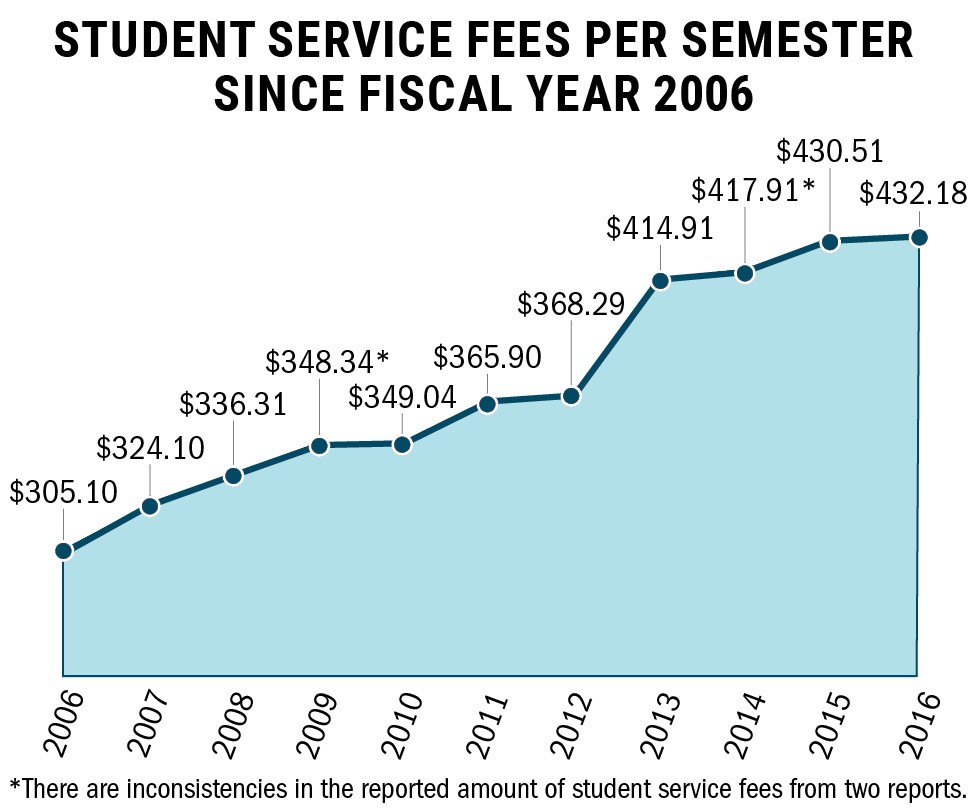 Changes in University of Minnesota student service fees over the years.

To help rein in the cost of college, Minnesota lawmakers would like to limit student service fees.

Two proposals — which are opposed by administrators and student leaders — in the Minnesota Legislature would require the University of Minnesota and Minnesota State institutions to make mandatory student service fees optional or get any proposed increase approved by the student body in a vote.

While the state can’t force the University to implement the referendum proposal, if the school ignored the state’s request it would withhold the amount of revenue the University generated because of any increase from its state appropriation the following year.

The bills aim to cut costs for students who don’t use services the fees fund, author of the bills, Rep. Drew Christensen, R-Savage, said at a House higher education committee hearing Tuesday.

It’s unfair for students who struggle financially to pay for services they can’t take advantage of, Christensen said.

“This bill is trying to level the field,” Rep. Josh Heintzeman, R-Nisswa, said at the meeting. “I think this is one of the most interesting bills we’ve heard.”

The bills come amid an increasing student service fees at the University and higher numbers of groups requesting funds.

The proposals, which have no Senate companions, could be included in an omnibus bill this session.

The bills faced pushback from Minnesota State and University students and administrators, who said making the fees optional would hurt students’ college experiences.

The fees generate around $33 million for the school annually, University Vice Provost for Student Affairs and Dean of Students Danita Brown Young said at the hearing.

About 93 percent of the fees support units such as Boynton Health, University Recreation and Wellness, Student Unions and Activities, University Student Legal Services, the Aurora Center and the Student Conflict Resolution Center.

Other student groups and student-run media organizations are funded by the rest, Brown said.

Optional activity fees would hurt students and cause complications for administrators, she said in an interview.

“We would really have to create some sort of mechanism to recognize fee-paying students and bar participation from those students who don’t opt in to paying the fee.”

At the meeting, Minnesota Student Association President Abeer Syedah said lawmakers were interfering in a process that falls under student jurisdiction.

Only students pay for the fees, Syedah said, so regulatory power for the process should stay with student government and student affairs.

“I think it’s a little bit of an overreach … I get concerned about what other things will then be brought to the Legislature that are in jurisdictions like ours,” she said.

Opponents of the bills have conflicts of interest because their groups are funded by the fees, said Rep. Tony Albright, R-Prior Lake, a co-author of the bills.

“If we want to talk about student life, that’s all well and good, but not every person’s idea of student life is the same,” he said. “And to subject everyone to the same legitimacy of student life I think is a bit of a reach.”

Student advocates for the activity fees seem to contradict their desire for more affordable tuition, he said.

The proposals follow a recent revamp of the University’s student service fee process.

The University limited how much funding groups could ask for, Brown Young said.

This year, over 130 student groups received funding — up from 84 in 2014, said Sara Carvell, student service fee advisor and the associate director of the Office for Student Affairs,

Groups like the Minnesota Student Association, the Council of Graduate Students and Professional Student Government also receive funding, but are not included in the $432.18 service fee.

Funding requests were getting “unwieldy,” Brown Young said, with some approaching $300,000 — which made it hard to stay fair to each student group.

She said the fee committee is working to find how much fees will cost next year, but won’t know the final amount until the Board of Regents approves the school budget in June.

“We’re really trying to keep the fees as flat as possible,” Brown Young said. “If it were to go up it would probably only go up like, a percent or two.”

Emun Solomon contributed to this report.