U professor works with local tribes on rainforest conservation

A plant biology professor is paying villagers from Papua New Guinea to assist in his research. 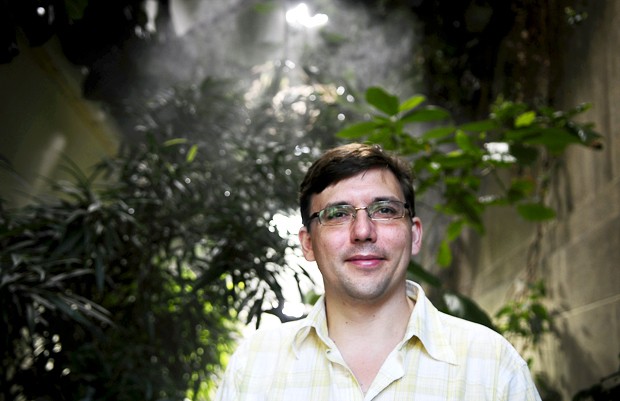 George Weiblen , a professor of plant biology at the U, has been documenting biodiversity in the rainforests of Papua New Guinea for 15 years.

Papua New Guinea , an island nation just north of Australia, has been an ecological hot spot for years, but like many tropical locales, its rainforests and cultures are in danger of disappearing due to heavy logging. George Weiblen , a professor of plant biology at the University of Minnesota, is out to change that. Weiblen has been documenting biodiversity in the rainforests of Papua New Guinea for 15 years, researching topics from co-evolution to tree diversity. He has also been watching destructive logging raze the countryâÄôs forests and wreak havoc on native communities. âÄúItâÄôs very easy for these people to be taken advantage of because they have naÃ¯ve expectations, they arenâÄôt well educated about the value of their resources,âÄù Weiblen said. Most of the land in Papua New Guinea is under tribal ownership, so researchers canâÄôt perform their studies in isolation, like they could at a state park or wildlife reservation elsewhere. âÄúAny patch of forest that you might wish to study is actually someoneâÄôs backyard,âÄù Weiblen said. After visiting the island multiple times a year for more than a decade, Weiblen formed close relationships with the Ohu and Wanang villages on the island, even using some of the villagers as researchers for his projects. âÄúInstead of bringing in a lot of foreign experts, weâÄôve invested in developing local expertise to do the research,âÄù Weiblen said. Most communities survive on subsistence farming, only growing enough food for themselves. With little connection to the outside world, money is hard to come by in isolated forest villages. The desire is great for modern amenities and new medicine in local villages and WeiblenâÄôs research provides one of the few alternatives to money offered for logging rights to village lands. âÄúThereâÄôs hardly any infrastructure at all,âÄù said graduate student Annika Moe , who has travelled with Weiblen to Papua New Guinea. âÄúWhere I work thereâÄôs no electricity, no plumbing, thereâÄôs barely a road.âÄù While the money from royalties paid to villages for use of land and villagers for labor are significantly less than the money gained by selling logging rights, the research method is more sustainable, Weiblen said. This past summer logging preparations around the Wanang village have intensified, but thanks to the efforts of Weiblen and local villager Filip Damen, Wanang and its lands are safe. Weiblen set up one of his research cooperatives in the Wanang village after being contacted by Damen. Together, the two worked to bring science to the village, and Damen was able to organize villagers to sign a conservation deed creating an area of protected forest for the Wanang. But even with the duoâÄôs efforts, each year 100,000-120,000 acres in Papua New Guinea are cleared while 200,000 more acres are affected by selective logging. âÄúUltimately theyâÄôll be cutting a huge area around this Wanang conservation area,âÄù said Tim Whitfeld , another University graduate student who has been working with Weiblen in New Guinea. âÄúIt will become an island, essentially, surrounded by forest thatâÄôs been logged.âÄù