A community of voices 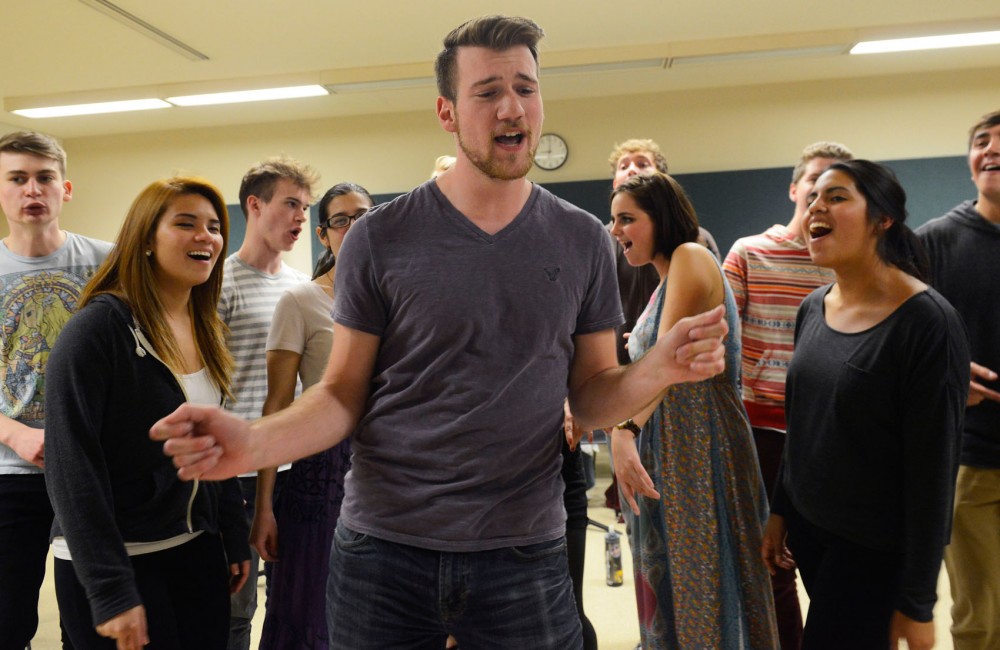 Urban Sound, a co-ed a cappella ensemble, rehearses in Ferguson Hall on Monday. The group is one of five a cappella groups that will be performing at the University A Cappella Fest at Coffman Union on Saturday.

Vocal talents from the University of Minnesota are collaborating at the UMN A Cappella Fest on Saturday.

On the docket are student a cappella groups 7 Days, Basses Wild, the Enchantments, Urban Sound and Vocal U, each of which is getting a 20-minute set.

It’s a rarity for this many vocal groups to be showcased at once. Differing from one-group performances in the past, the festival aims to unify the a cappella scene throughout campus.

“We are trying to foster a sense of community within the student groups; there hasn’t been that framework and infrastructure in the past couple years,” Dante Leyva of Basses Wild said.

Participants hope their collaboration draws news ears to each group and brings attention to the art of a cappella as a whole.

The set list for the night ranges from a poppy Beyonce mashup to a soulful rendition of “Take me to Church” by Hozier.

Aside from learning music, the groups take time in selecting costumes and creating flawless performances that act as extensions of each group’s style. For example, the Enchantments are known for wearing classic black dresses with a pop of colored heels.

Urban Sound rehearses its music repertoire at two-hour rehearsals twice each week, a schedule that gets even busier in the crunch time leading up to a performance, Jenna Borrelli of Urban Sound said.

About 10 to 15 members comprise each group. Few of the performers are music majors, with the majority of singers coming from a diverse array of fields.

Urban Sound is a newer addition to the a cappella crowd — this is their second year on campus. The growth of their group was what drew Borrelli in.

“What I really like about Urban Sound is being a part of the process and developing the policies and culture that will last after I graduate. I want what I do to resonate,” Borrelli said.

Borrelli said Urban Sound performs at the local Ronald McDonald House and will sing at the Angel Benefit concert later in April.

“A rich part of our philosophy is community involvement. It is only our second year on campus, but it is such a deep-rooted aspect of our group. As we evolve and grow, we hope to always stay involved,” Borelli said.

Every group noted their successes but also acknowledged the challenges they face along the way to creating a successful performance.

“The fact that it is an entirely student-run group, we try to have the leadership process be pretty democratic and have everyone participate. That can be hard to balance with school and work,” Leyva said.

Don’t lose hope; “Pitch Perfect” isn’t all lies. These musical artists love what they do and have met amazing people along the way.

“We are friends first and a cappella group second,” Mikalyna Sell of the Enchantments said.

What: UMN A Cappella Fest
When: Saturday 5 p.m.
Where: Coffman Union
Cost: Free