On a 4-game win streak, Gophers return to Big Ten

Minnesota’s opponent, Iowa, is hot too, winning seven of its last 10 games. 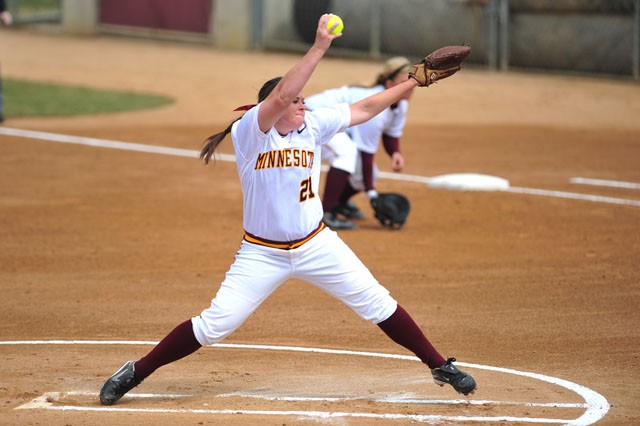 After four straight nonconference wins last week, the Gophers softball team (23-16, 1-3 Big Ten) will get another chance to match its paltry total of two wins in the Big Ten last season as it goes into a double-header at home today against Iowa (21-15, 4-2), which is tied for third place in the conference.

Despite an overall winning percentage of .590 âÄî fifth best in the Big Ten âÄî Minnesota heads into its games against the Hawkeyes stuck in a tie with Northwestern for ninth in the conference.

Still, itâÄôs very early in the Big Ten season, and the Gophers are coming off one of their best back-to-back pitching performances in years. Alissa Koch and Sara Moulton both tossed one-hit shutouts against South Dakota on Saturday, combining for 30 strikeouts. The duo has racked up 308 strikeouts this season for Minnesota, the second most in the conference behind IndianaâÄôs 345.

The Gophers are in the middle of their first real homestand of the season, a six-game stretch that will end with a pair of games against Penn State this weekend. The team had a good turnout for its games Saturday, and the double-header today will be broadcast on the Big Ten Network.

The Gophers have racked up 22 hits in their last three home games and will look to continue the trend against an Iowa team that is seventh in team ERA in the Big Ten.

Senior first baseman Malisa Barnes continues to tear up the opposition, piling up 49 hits and a .430 average this year, both good for fourth in the conference. Barnes hit .400 in her last three matchups against the Hawkeyes.

Minnesota will be facing a hot Iowa team, winners of seven of its last 10. While they are third in the Big Ten, the Hawkeyes have yet to beat a team in the top half of the conference standings.

Seniors Stephanie Ochoa and Chelsey Carmody and junior Liz Watkins led the Hawkeyes on offense. Both Ochoa and Carmody are hitting more than .400 and are ranked sixth and eighth in the conference for batting average, respectively. Watkins has supplied the power, leading the team with seven home runs and 28 RBIs.

Though Minnesota hasnâÄôt found the success it was expecting in the Big Ten so far this year, the team knows it can still rebound from the 1-3 hole.

âÄúWe talk all the time about needing to have two of the three things you need in softball to win,âÄù head coach Jessica Allister said. âÄúYou have offense, defense and pitching. WeâÄôve gotten at least two out of the three in all four games [during the win streak], and itâÄôs resulted in a favorable decision for us.âÄù