U students flock to State Capitol

Students lobbied for child care and internship rights in meetings with state reps. 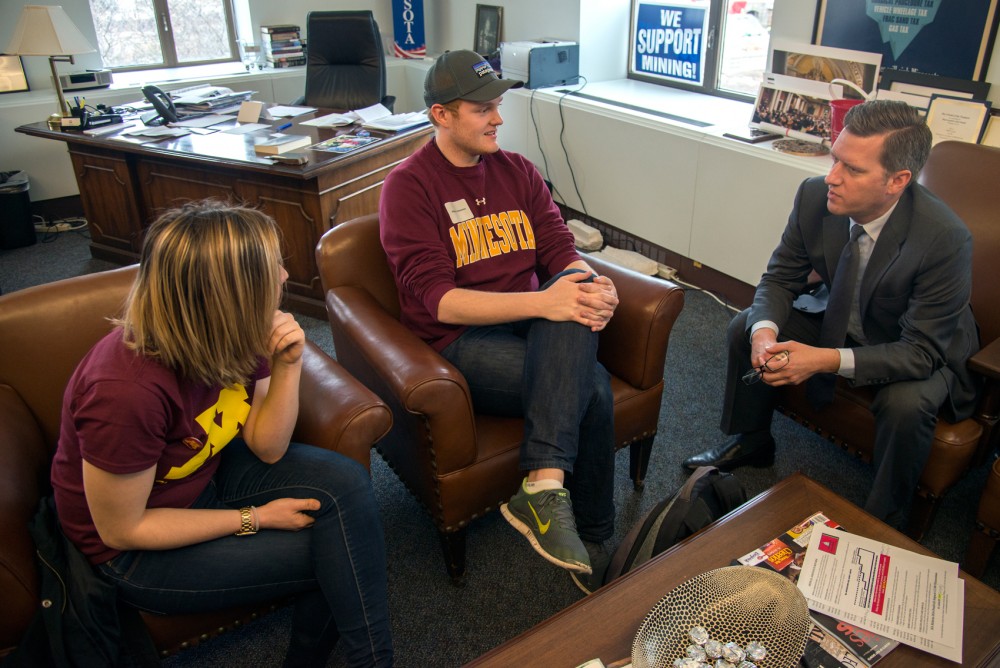 Speaker of the Minnesota House of Representatives Kurt Daudt meets with MSA President Joelle Stangler and Speaker of the Forum William Dammann at his office during Support the U Day on Tuesday.

Raj Chaduvula
Students came face-to-face with senators and representatives on campus issues Tuesday.
Students from all five University campuses attended “Support the U Day.” The day consisted of prescheduled meetings where students talk with senators and representatives.
Nearly 200 students gathered in downtown St. Paul to advocate for issues that students face at the University of Minnesota.
“The day is about asking people to champion the University and its initiatives,”  said Nick Wilson, executive director of the Minnesota Student Legislative Coalition.
This year, students focused on the University’s bonding request, expansion of a childcare grant and internship protection legislation, he said. Both Democrats and Republicans have voiced support for the childcare and the internship initiatives, he said.
In addition to these items, a few MSLC students also advocated for a portion of the state’s supplemental budget surplus to go to the University.
The bonding request on the other hand hasn’t received the level of complete support that the other issues have, Wilson said.
Minnesota Student Association President Joelle Stangler and MSA’s Speaker of the Forum, William Dammann,  met with Rep. Kurt Daudt, R-Crown, to discuss the bonding request and the proposed tuition hike for nonresident students that University regents will discuss Thursday.
Daudt said his team will definitely consider aspects of the bill, though he could not make any guarantees about the vote’s outcome.
Many legislators support certain aspects of the capital request, Stangler said, though few support the entire package.
Legislators seem to be in support of the parts of the capital request that deal with research and medicine, Wilson said.
Amogh Kambale, MSA’s infrastructure director, said his meeting with Rep. Drew Christensen, R-Burnsville, covered the bonding request and confirmed Christensen’s support.
Kambale said he knew of some meetings where senators were uncooperative, yet he remained encouraged by the outcome of the meetings.
“I’ve gotten feedback from many of the students that the meetings are going well, that the legislators are really listening,” Wilson said.
Meeting with constituents face-to-face helps legislators better understand the human impact of the legislation they work with, Kambale said.
“A lot of this is putting faces in front of the advocacy,” Kambale said.
Delete Image
Align Left
Align Center
Align Right
Align Left
Align Center
Delete Heading