This time around, just reaching round of 16 isn’t sweet enough 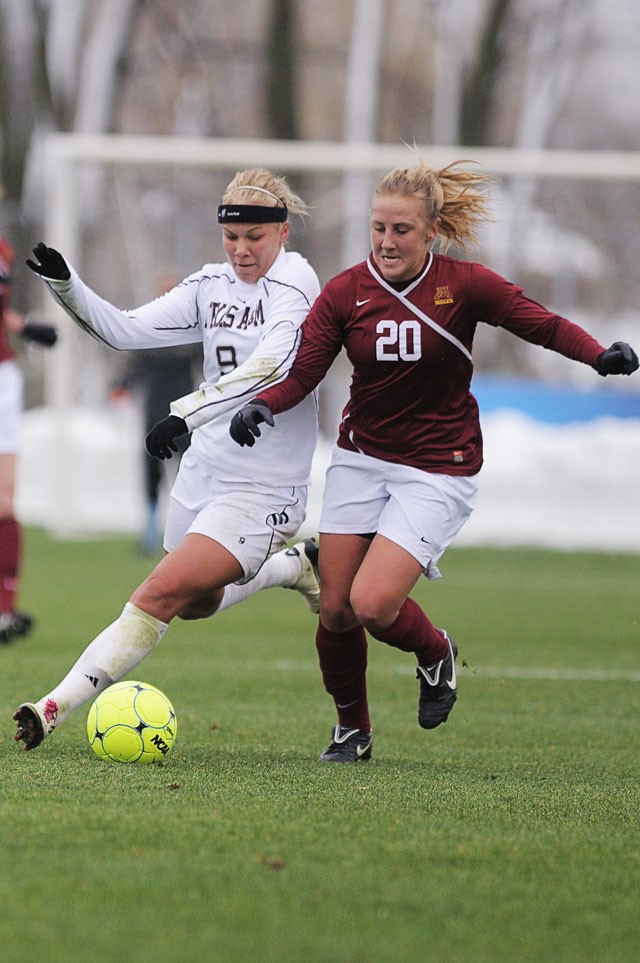 In 2008, a dozen wide-eyed freshmen and sophomores were part of the first team in Minnesota soccer history to advance to the Sweet Sixteen of the NCAA tournament.

Two years later, that dozen is back to the Sweet Sixteen, this time as a narrow-minded group set on a run to the Final Four.

âÄúI think two years ago when we made it, it was, âÄòOh my gosh, weâÄôre in the Sweet Sixteen, this is crazy,âÄô âÄù junior Tamara Strahota said. âÄúNow, we know we can [go farther] and we should.âÄù

âÄúWeâÄôre not happy with this at all. Obviously itâÄôs a great accomplishment to make it this far, but itâÄôs not the end for us. Final Four is our goal.âÄù

Such confidence, if outspoken, is not baseless. Georgetown, after upsetting top-seeded Maryland, will visit Elizabeth Lyle Robbie Stadium on Saturday for the GophersâÄô third home game of the postseason, where they are fresh off a 2-0 second-round dismantling of No. 9 Texas A&M.

Beating the Aggies was an upset on paper, yes, but hardly David taking down Goliath. Minnesota was ranked for a good portion of the season and has wins over San Diego, South Carolina and Illinois âÄî all teams that have made early exits from the NCAA tournament.

Four games ago, however, even a place in the postseason for the Gophers was uncertain. A string of three straight losses, albeit to tournament qualifiers, and a tie at home against Michigan State left Minnesota on the bubble and anxious on selection day.

But they were selected with an at-large bid and have looked in the first two rounds like the team that notched two critical wins âÄî 2-1 at Northwestern and 3-0 at Indiana âÄî to finish the regular season. In the tournament, the Gophers have scored the separation goals against Creighton and the Aggies that were absent in those three losses to Penn State, Ohio State and Michigan.

Bethke, a natural striker turned midfielder by necessity this season, was plenty happy to distribute the ball from the middle or the wing and pile up 13 assists during the regular season.

But come tournament time, she had been at forward for two games thanks to StrahotaâÄôs move to outside back. Against Creighton and Texas A&M, she promptly doubled her season goal total with the equalizer and game-winner on Friday and another game-winner on Sunday.

For her efforts, TopDrawerSoccer.com named Bethke to its national WomenâÄôs Team of the Week. BethkeâÄôs three goals are currently tied for tops in the NCAA tournament.

Bethke is the obvious catalyst, but perhaps overlooked is the weekend fellow senior Julie Rezac put together at left midfielder.

On Friday against Creighton, she assisted the first of BethkeâÄôs two goals and freshman Steph BrandtâÄôs team-leading seventh of the season with pinpoint crosses from the left side. They were just her third and fourth assists of the season, but more could be on the way if she continues to beat defenders to the end line.

Regardless of how Minnesota does it, the Hoyas can expect a team thatâÄôs hunting for the goalmouth, not to mention a berth in the Elite Eight, on Saturday.

âÄúTheyâÄôre a very hungry team,âÄù head coach Mikki Denney Wright said. âÄúTheyâÄôre certainly not satisfied. They want to make a long run, they feel theyâÄôre capable of doing so, and I think theyâÄôre set on it.âÄù