Proposal could result in demolition of historic, 115-year-old grain elevators

The plan to build a new track and field facilities was in response to possible Title IX violations implicit in the U's push for the Athletes Village. 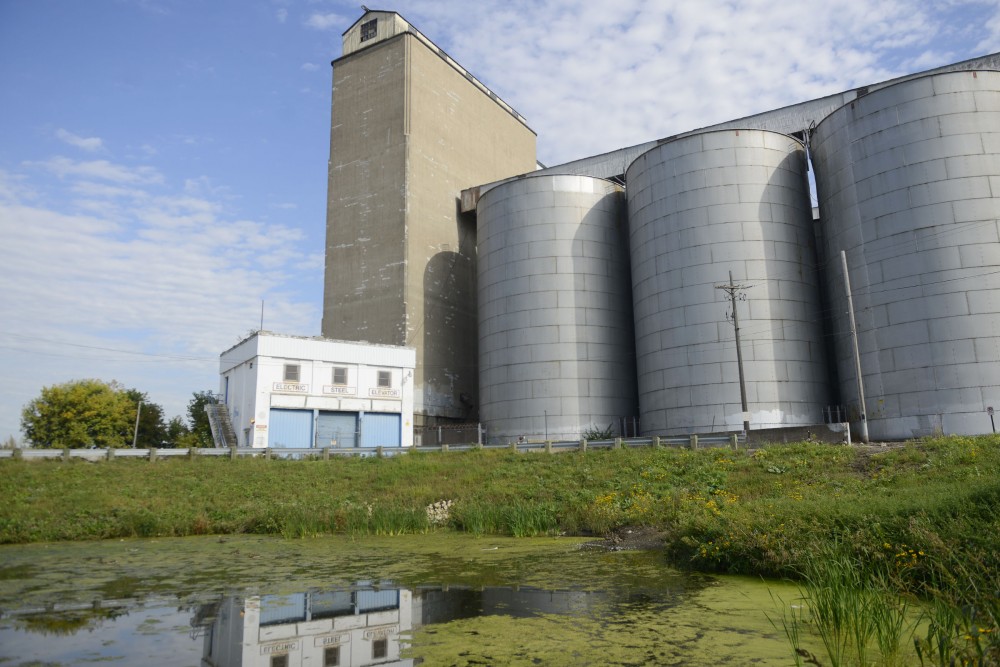 The Electric Steel Grain Elevator stands near TCF Bank Stadium on Sept. 20, 2016. The University is looking to build new track and field facilities which would lead to the demolition of the elevators.

A proposal to build a new track and field complex may cost more than the facility’s $13 million price tag.

The University of Minnesota is taking comments through Sep. 23 on the proposed demolition of 115-year-old grain elevators near TCF Bank Stadium. The plan to build a new track and field facility near the Athletes Village, which the University’s Board of Regents will vote on in October, would displace a sports bubble and recreation field.

The University suggested moving the recreational area to the grain elevator site in September — a plan that would add another $6 million to the overall track project.

Monique MacKenzie, director of planning, space and architecture for Capital Planning and Project Management, said they’ve received many comments opposing the demolition, including a letter from the Prospect Park Association.

“The comments have all been, ‘we think that the elevator structure should be preserved,’” she said.

MacKenzie said comments opposing the demolition only cited the property’s historical significance, rather than possible ways to re-commission it.

Regent Thomas Devine said they hired third-party evaluators to assess if the abandoned elevators could be reused, but found few cost-effective options.

“We haven’t seen a lot of uses for those buildings at this point … nothing really particularly … practical in terms of what we’re doing,” he said.

The University came under fire for possible Title IX violations when it originally proposed the Athletes Village, which displaced the previous track facility.

“The Title IX pieces are important to us because there’s a lot of women that are attached to the track and cross country components,” Devine said.

Mitch Hechsel, a member of the men’s track and field team, said having a new facility would be beneficial.

“It would mean everything,” he said. “It’d be huge for recruiting.”

The team currently practices in multiple locations, Hechsel said, including a recreation field, practice football fields and a small indoor track they share with the women’s team.

“Being stuck in a 200-meter track indoors, there’s not much room for both teams to be there,” he said.

The proposed facility, Hechsel said, would allow more athletes to practice at the same time.

“Just having a new facility is just refreshing,” he said. “It gets you motivated and … is just a breath of fresh air.”

But, Hechsel said, the biggest draw of a new track facility would be the ability to host home track meets.

The track team has had a roughly 20 year drought since it last held a home meet, MacKenzie said.

“That’s just something that is being taken away from all of us,” Hechsel said. “Our parents can’t even come watch us. They have to fly halfway across the country.”

Aside from relocating the sports bubble, Devine said the University is currently evaluating the rest of the land for expansion.

“The real dilemma for the University of Minnesota right now is, there’s 522 acres of railroad land north of the stadium there,” he said.

As for what they’d expand, Devine said he’d like to see some of the land used for additional University medical education buildings.

“We should be expanding the medical areas of the University of Minnesota into those areas, because it has a lot of future potential to be a better resource for the medical device industry,” he said.

Devine said while the University is still looking for suggestions on possible uses for the elevators, he doesn’t see what purpose they’d serve going forward.

“At whose expense and to what purpose would we be using the elevators?” he said. “We’re not going to use them to store grain anymore.”

Devine said a final decision on the proposal will be made at next month’s board meeting.

If approved, he said demolition of the elevators would start this fall, with construction of the new track facility beginning next spring.