‘I have never seen anything like it before’: UMN student tests his magic tricks on campus

First-year student Arman Shah has built a reputation for his magic tricks around campus. 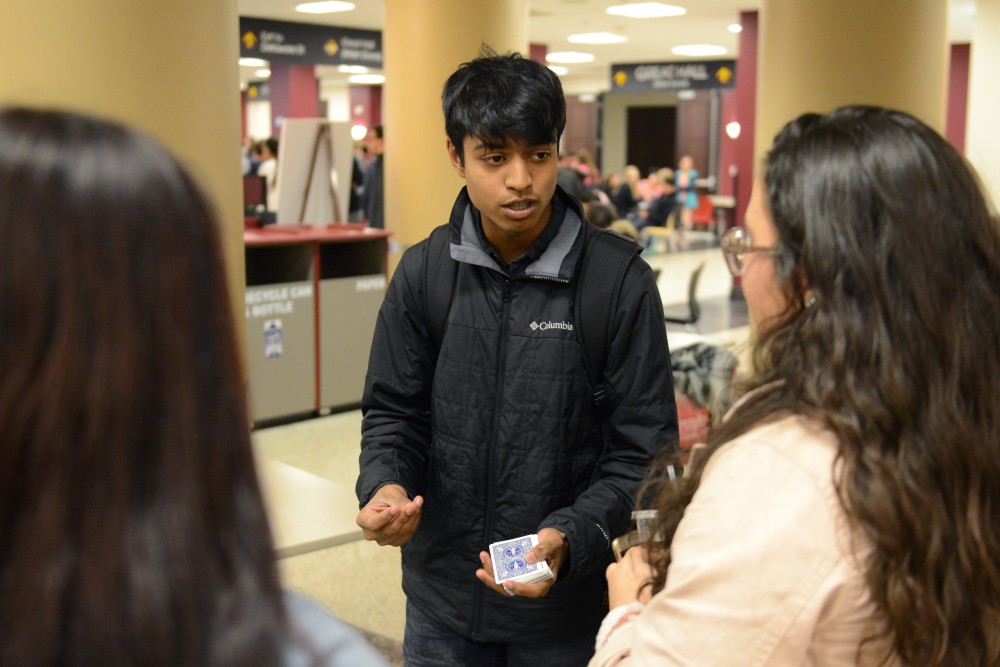 Computer Science freshman Arman Shah performs a magic trick in Coffman Memorial Union on Thursday, April 27, 2017. Shah has been performing for 7 years after teaching himself on YouTube.

With a deck of
cards in hand, Arman Shah searched for students to practice his magic on in
Coffman Memorial Union.

The first-year computer
science  student has built a reputation with
his magic tricks. He can be found in dining halls with his props most nights,
but other days he just approaches students and asks if they want to see a trick.
It works — most of the time.

Shah has recently
started performing live through the University’s Comedy Club. The self-taught
magician credits his skills to hours of practice and YouTube tutorials, but he often
practices new jokes and tricks on students around campus.

He’s also the
youngest member of the Minnesota chapter for the International Brotherhood of
Magicians.

“I wish I could’ve
been doing what he was doing when I was his age,” member Noah Sonie said.

Shah’s creativity
and humor shows in his trick designs, Sonie said. The two are collaborating on
tricks that combine mind-reading with comedy.

“It is unique
because we are combining something that is serious and personal with something
funny,” Sonie said.  “[Shah’s] main focus
is not the magic; it is entertaining people.”

In Coffman, passersby
joined spectators as Shah made cards disappear. Within minutes, the group tripled
in size to about 20 people.

“I have never seen
anything like it before,” said Cam Anderson, a journalism senior.

After Shah was
done, neuroscience junior Jeremy Lund approached him to show the progress on
his own new trick.

“[Shah] inspired
me to do my own research on magic,” Lund said.

Before Shah goes
out and shows off his skills to fellow students, he practices them in his dorm.

The two have been
friends since middle school, so Kautzky says he has seen the ups and downs of
Shah’s magic career.

“His awkwardness
[sets him apart],” Kautzky said. “He prides himself on that … makes jokes about
it. You rarely see people play that.”

While he enjoys
the performing aspect, Shah has also used his magic to flirt. Some of his cards
have his name and number on them.

For Valentine’s
Day, Shah made a YouTube video where he asked girls around campus to be his
Valentine’s Day date using magic card tricks.

“It hasn’t worked
yet, but maybe someday,” Shah said.

So far, his tricks
have gotten him admitted to one fraternity party, he said.

“Drunk people are hard … Their attention
span does not last more than 10 seconds, so you have to keep bringing them
back,” Shah said.

With three years until
graduation, Shah is still considering his prospects. But for now, he plans to
keep bringing his magic to students around campus.

“It would be cool
to be a performer someday … very unrealistic. That is why I am at college,”
Shah said. “It is fun to do, and I am excited to see where [magic] takes me.”