Brewster drops in on local recruits

Coach charters a helicopter to visit three games in one night. 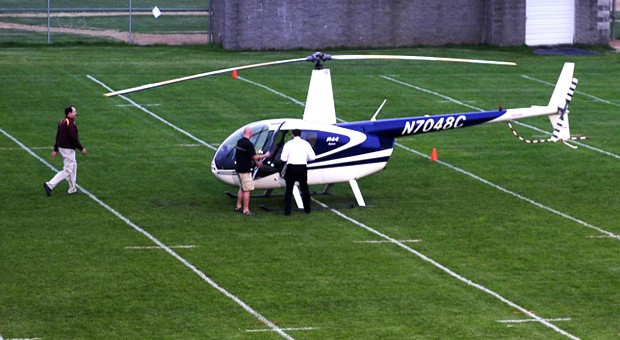 Over the cracking of pads and helmets and the chanting of cheerleaders and fans, an unusual sound descended upon three metro area high school football games Friday night. The unmistakable whirr of helicopter blades turned all eyes skyward. University of Minnesota head coach Tim Brewster had arrived. For the first time, but probably not the last, Brewster chartered a helicopter in order to visit three high school football recruits. Though NCAA recruiting rules stipulate that Brewster cannot comment on individual players, the three schools he visited âÄî Irondale, Cretin-Derham Hall, and Minnetonka âÄî each feature a single highly-rated senior player. IrondaleâÄôs Jimmy Gjere , an offensive tackle, has already verbally committed to play for the Gophers. Cretin-Derham HallâÄôs Seantrel Henderson , another offensive tackle, stands 6-foot-8, weighs in at 301 pounds and is rated by Rivals.com as the top overall high school recruit in the country. Henderson lists Minnesota among several schools he is still considering. The third target, Minnetonka defensive tackle Beau Allen , is also considering several schools, and is scheduled to visit Wisconsin next weekend. Six other Gophers coaches joined Brewster on the night, meeting the NCAAâÄôs maximum allowance of seven coaches recruiting at one time. Football recruiting coordinator Dan Berezowitz said that BrewsterâÄôs flights âÄî which allowed him to watch 900-plus pounds of high school recruits in a single night âÄî were a logistical decision. âÄúHeâÄôs not showboating; heâÄôs not trying to make a spectacle at the game,âÄù Berezowitz said. âÄúThe helicopter [was] to get him from point A to point B.âÄù Recruiting rules allow Brewster only a single visit to each high school during the football season. Athletics director Joel Maturi said his only consideration was that the trip itself was within the laws of the NCAA, the Big Ten and the University. Beyond that, he said, how Brewster chooses to spend his recruiting budget is his own decision. âÄúObviously somebody might think we shouldnâÄôt spend one dollar [recruiting],âÄù Maturi said. âÄúAnd IâÄôm respectful of that. But it is a multimillion dollar business, and weâÄôre in the hunt to recruit the best players in the state of Minnesota, as well as those nationally who are interested in Minnesota.âÄù Both Maturi and Brewster confirmed that the cost of the trip, considering that Brewster visited three players in a single night, compares favorably with a cross-country trip to recruit a player in another state. According to Complete Helicopters , a local chartering service, a three-hour rental of a helicopter costs around $2,200. Brewster said that heâÄôd flown both personally and professionally in a helicopter before and, if the occasion arose, would consider taking to the sky again. âÄúAbsolutely,âÄù Brewster said. âÄúWhat it allowed us to do is get a lot of work done in a short period of time, and it worked out really well.âÄù Irondale principal Scott Gengler said Brewster contacted him last week to suggest the idea, and called Friday morning to confirm his plan. With several empty practice fields surrounding the school, landing space was easy enough to find, and an enthusiastic Gengler gave Brewster the green light. âÄúThe Irondale community is very proud of our football program,âÄù Gengler said. âÄúAnd we welcome the UâÄôs efforts in celebrating JimmyâÄôs verbal commitment.âÄù Brewster landed on a neighboring practice field shortly before IrondaleâÄôs game kicked off and was introduced over the loudspeaker to a cheering crowd. A surprising highlight for the coach must have been watching his recruit, 6-foot-7, 275-pound tackle Gjere, run a trick play, dropping back and throwing a perfect 40-yard spiral for IrondaleâÄôs first touchdown. After another successful Irondale drive, Brewster was back in the chopper for his next stop, while a few assistants stayed behind to continue watching Gjere. BrewsterâÄôs effort, though unique to Minnesota, is not the first of its kind in college football. Both MarylandâÄôs Ralph Friedgen and RutgersâÄô Greg Schiano have chartered helicopters in the past to visit players. Maturi reiterated that, with three games going on at one time, it would have been impossible to make all three stops if the coach had traveled by car. He conceded that the players themselves may have been impressed by BrewsterâÄôs surprise drop-ins. âÄúKids are impressionistic,âÄù Maturi said. âÄúIt is a situation of, âÄòHow committed are you to recruit me?âÄô and I think it was a positive thing. HeâÄôs as good a recruiter as there is in America, and thereâÄôs a reason for it.âÄù