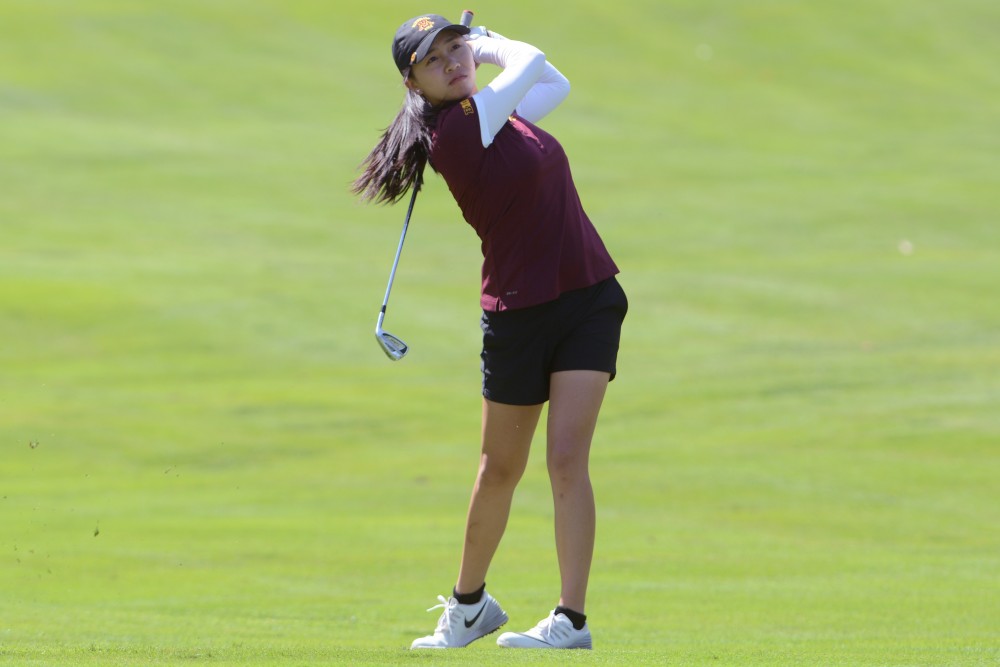 Coming off a strong finish to their last tournament, the women’s golf team used a strong opening round on Monday to conclude the Juli Inkster Invitational at Meadow Club with an 884 (+20) — tied for their best finish-to-par of the season.

The Gophers tied for 7th place at the competition, their first top-10 finish of the season. Head coach Michele Redman said the result represents another step in the right direction for the team.

“We’re just going to keep doing everything that we’re doing and just keep improving and getting better,” Redman said. “Definitely liked where we started out, I wish we would have finished a little better. We just didn’t make any putts today but we made some the first round. … We’re definitely improving.”

After shooting a season-best round score in the third round of the Gold Rush tournament on Feb. 26 with a 290 (+2) the Gophers beat that mark by five strokes on Monday. Minnesota fired an impressive 285 (-3) as a team in the first round, one stroke behind Rutgers for the best round of the tournament.

Senior Muyu Wu led Minnesota with a pair of 71’s (-1) in her two rounds on Monday. She shot a 2-over 74 on Tuesday to finish at even-par (216), tying for fifth place among individuals. For Wu, it was the first top-five finish of her career.

Sophomore Kate Lillie also set a career best this week. With an opening round 69 (-3), she shaved two strokes off her career-low 18-hole score, which she set in the third round of her last tournament. Lillie tied for 16th place among individuals with a 221 (+5).

“I tried to put myself in the same mindset at the beginning of yesterday,” Lillie said. “I knew how well I was playing down in Long Beach, so just trying to carry that through — which I thought I was able to — on the first day.”

Three other underclassmen also competed in Minnesota’s lineup. Sophomore Joanne Free tied for 29th with a 224 (+8), freshman Karen Zhang tied for 46th posting a 228 (+12) and sophomore Grace Kellar ended up one stroke behind Zhang with a 13-over 229.  All five golfers in the Gophers’ lineup shot at least one round of 73 (+1) or lower.

“I’m really impressed and I’m really proud,” Wu said. “I have to say our team’s pretty young, because we don’t have any juniors and I’m the only senior in the lineup this time. Our freshmen and sophomores are doing a great job and working really hard. They’re shooting good scores, so I’m very proud of them.”

Rutgers had the lowest team score at the tournament with a 868 (+4), led by sophomore Harriet Allsebrook, who finished five strokes ahead of any other individual with a 9-under 207.

Minnesota has just one tournament left before the Big Ten Championships. The team will head to Columbus, Ohio on April 12 to take part in the Lady Buckeye Spring Invitational.