Minnesota trailed 2-0 late on Saturday, but fought back to win 4-3 in overtime. 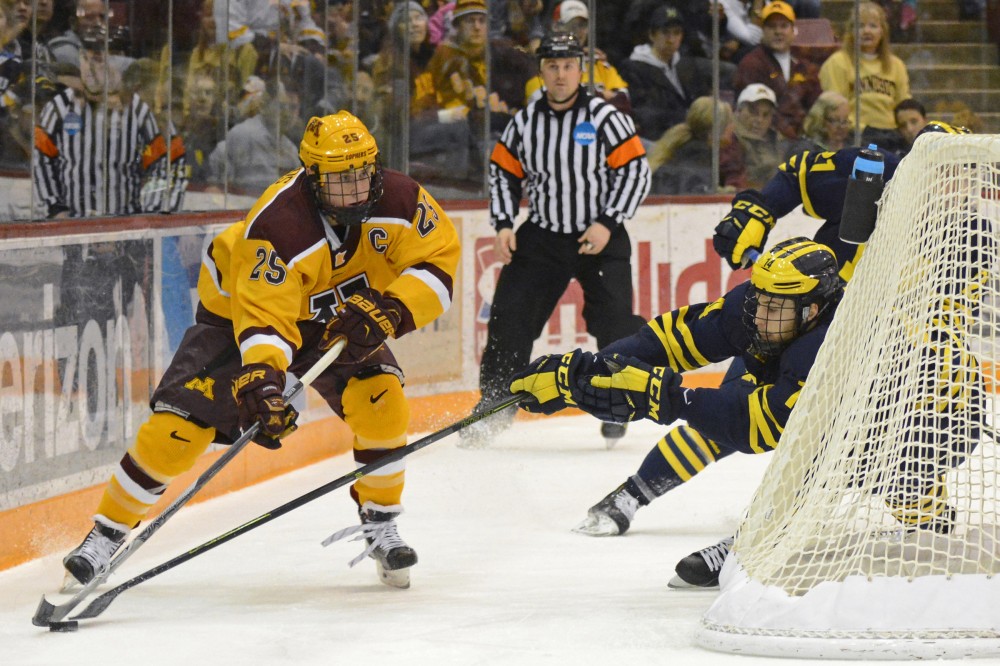 Gophers forward Justin Kloos controls the puck while playing against Michigan at Mariucci Arena on Feb. 26, 2016.

Late-game heroics from captain Justin Kloos and forward Rem Pitlick led the Gophers to two victories over the weekend.

The Gophers were down 3-2 Saturday with less than two minutes left following a successful penalty shot goal by Penn State.

Kloos provided the goal off of the faceoff to send the game to overtime with only 3.5 seconds left in regulation.

“That was the plan,” Kloos told reporters on Saturday. “Have a couple of guys go to the net, but it all starts with [Taylor Cammarata] doing a good job on the faceoff.”

Minnesota had the momentum on its side and kept it through the end of the game with Pitlick scoring the game winner for the Gophers.

Despite being outscored 2-0 through the first two periods, Minnesota outscored the Nittany Lions 3-1 in the final period of regulation.

“We needed the first one,” head coach Don Lucia told the media on Saturday. “And then the momentum would swing back our way, and I think that happened.”

The first-tying goal to knot up the game 2-2 was scored by forward Tyler Sheehy — 18th goal of the season — solidifying his point lead on the team and in the Big Ten.

Goaltender Eric Schierhorn looked strong in net for the Gophers Saturday, stopping 42 of the 45 shots he saw — his highest save total of the season.

Forward Joey Marooney made a quick exit from the game after being in the lineup for the first time since February 3rd.

Despite Penn State scoring during the power play, Minnesota pulled out another comeback, winning 6-3.

“It’s never a bad idea to get pucks on the net,” Pitlick told the media on Friday. “That’s really been a focus for me and my game.”

“[Pitlick has] such great skills and speed,” Lucia told the media Friday. “We’ve seen him score a few goals like that, he’s even with the [defenseman] and then he’s gone. He’s like the roadrunner out there sometimes.”

Though Pitlick scored the hat trick, it was the captain who provided the heroics and game-winning goal.

“We weren’t too worried,” Kloos told the media on Friday. “We felt pretty confident in our game, obviously some adversity in the first with losing a guy … after that, I think we played pretty confident and pretty strong the rest of the game.”

Kloos’ goal also came on Minnesota’s lethal power play, which is ranked No. 4 in the nation.

One skater who played well without the puck was forward Darian Romanko.

He was integral to the Gophers’ penalty kill success and was instrumental in creating offensive chances on the forecheck.

Schierhorn had an impressive game as well, stopping 40 of 43 shots — his second highest save total of the season.