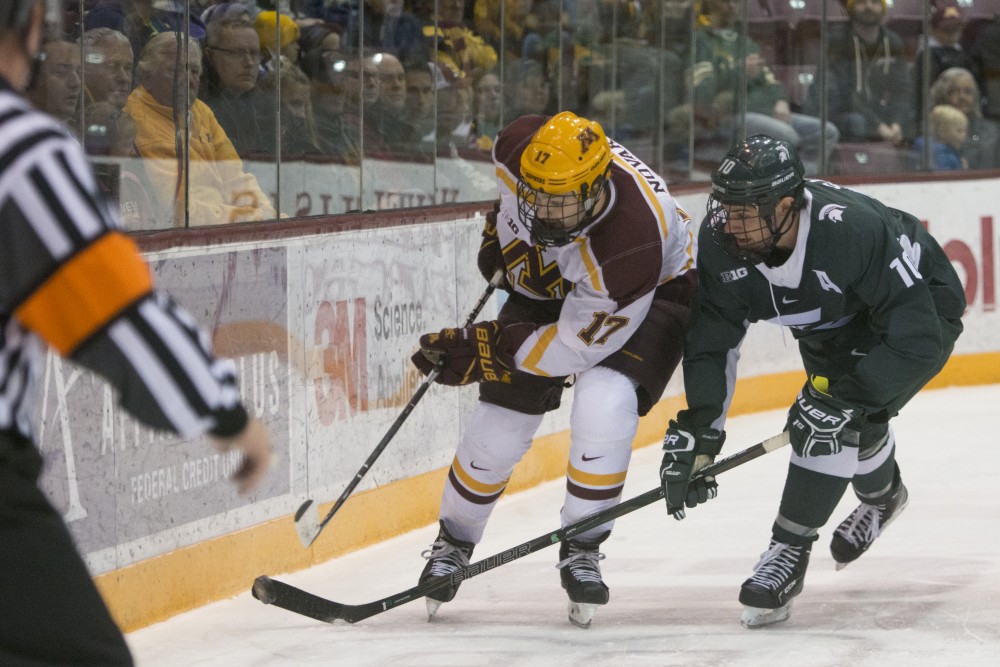 Forward Tommy Novak goes after the puck during the Gophers' game against Michigan State at 3M Arena at Mariucci on Friday, Nov. 3.

The Gophers could have let the Thanksgiving turkey, stuffing and pie make them look off at the start of the game Friday night.

But after a morning skate to make sure they were feeling right, the Gophers took the ice by storm and had as good of an offensive performance they’ve had all year, scoring seven goals in the weekend’s first game against Michigan State.

“We played a full 60 minutes I thought,” forward Brent Gates Jr. said. “We had a couple lapses here and there, but I thought for 60 minutes we played good all over the ice.

Gates tallied three assists in the game, including assists on the first two goals that came early in the first period to get things moving in a positive direction for Minnesota.

The first was from forward Rem Pitlick, who scored a back-hand, back-door goal off a pass from Gates in the first four minutes of play. The second goal came 25 seconds later at 16:18 when Tyler Sheehy caught a pass from Gates and went top shelf to give Minnesota a 2-0 lead.

“If you score early in the game, it’s amazing how you get the feel going,” head coach Bob Motzko said about the early goals.

Forward Sammy Walker took advantage of a bad breakout, passed the puck to Brannon McManus and McManus scored at 10:54 left in the first for a 3-0 lead. The Gophers took four shots to take a 3-0 lead. But Michigan State made it 3-1 when Spartans’ forward Mitchell Lewandowski scored seven seconds later with an answering goal off the next faceoff.

Sheehy scored again at 19:06 on the clock in the second period, and Gates got his third assist of the night.

Walker showed why he was named Mr. Hockey in the state of Minnesota last year as a senior in high school when he caught a pass from linemate Blake McLaughlin and put the puck top-shelf with a backhand shot at 12:48 on the clock in the second period. Walker’s effort made the margin 5-1 midway through the second.

“I just saw McLaughlin have it on the left side. He just threw it over there, and I saw the [defense] fumble it kind of, so I just poked it threw him, and luckily I got it in the upper corner,” Walker said.

Michigan State’s Patrick Khodorenko scored with 9:56 left to play in the second frame to cut the Gophers lead to a 5-2 score.

Clayton Phillips scored his first collegiate goal with just under two minutes remaining in the second period, to give Minnesota a 6-2 lead. The Gophers hadn’t scored over three goals since the second game of the season.

McManus scored his second of the game and the only goal of the third period with 8:22 left to play to make it 7-2. Goaltender Mat Robson got the win in the crease for the Gophers facing 24 shots and allowing two.

“I’m just trying to get better every day, improve every day, and try to feel comfortable every game and work on continuing to make progress every day,” Brinkman said.

Michigan State’s Friday loss to Minnesota made it the sixth loss in a row for the Spartans.

Minnesota will play Michigan State again on Saturday at 3M Arena at Mariucci at 7 p.m. for the series finale.