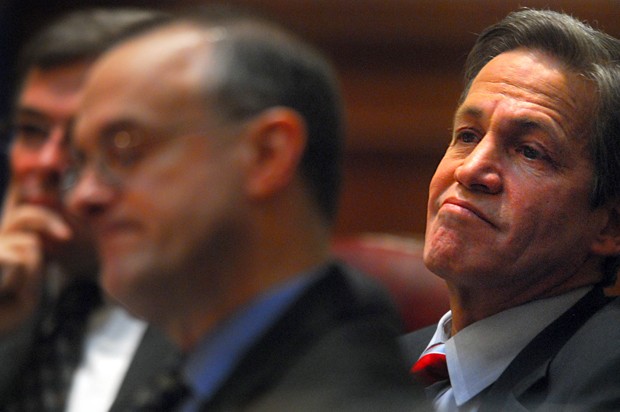 Norm Coleman, right, and his lawyers listen to opening statements made by his attorney Joe Friedberg (not pictured) at the Minnesota Judicial Center in St. Paul, Minn., on January 27, 2008. (Pioneer Press: Ben Garvin)

As Minnesota waits for its second senator, the recount trial brought on by Republican Sen. Norm Coleman âÄî who is currently trailing Democrat Al Franken by 225 votes âÄî got off to a sluggish start Monday afternoon. Coleman attorney Joe Friedberg attempted to enter copies of rejected absentee ballots individually as evidence. According to ColemanâÄôs legal team, approximately 5,000 ballots had been wrongfully rejected âÄî which his team of attorneys hope would swing the election ColemanâÄôs way if counted. During the official recount proceedings, it was Franken asking election officials to make sure absentee ballots were not wrongfully rejected while Coleman maintained if they were rejected they should stay that way. Franken counsel Kevin Hamilton called ColemanâÄôs change in strategy a âÄúdeath-bed conversion.âÄù ColemanâÄôs attorneys asked the three-judge panel to look at each ballot individually. Friedberg called on the court to make a decision about each unopened ballot envelope as to whether it should be opened and counted. However, this could only be done after each ballot was entered as evidence. Friedberg began the process by having a witness read the name and county from each rejected absentee ballot. But after about 30 minutes and a volley of objections, Franken attorney Marc Elias threw a monkey wrench into FriedbergâÄôs strategy by asking the judges to review the original ballots, instead of the copied ones, some of which had been copied incorrectly, had information redacted and notes written on them by ColemanâÄôs legal team. The judges ruled in favor of Elias, and decided if ColemanâÄôs legal team wants the court to review each ballot, copies of the ballot would not suffice; they must supply the original rejected ballots. ColemanâÄôs team now plans to subpoena the stateâÄôs 87 counties for all 12,000 rejected absentee ballots and find the approximately 5,000 ballots they think were wrongly rejected. The process will take weeks. âÄúThe single purpose of this is to make sure that every ballot that should be counted is counted and no ballot is counted twice,âÄù Coleman said in a press conference after the first day of the trial. Franken did not attend Monday and Elias said itâÄôs unlikely that he will. Friedberg said if the three-judge panel agrees to review the absentee ballots individually, Coleman will waive any future objections to the recount process.

Missing Dinkytown votes
ColemanâÄôs legal team listed the 132-134 purported missing ballots from a Dinkytown precinct as a primary concern. The canvassing board opted to use Election Day poll totals in the recount of that precinct because the ballots, after an exhaustive search, were never recovered. The board certified those results as accurate in what ColemanâÄôs legal team called a âÄúflagrant disregard for Minnesota lawâÄù that mandated a recount in the first place because of the less-than-0.5 percent margin of victory in the Senate race. ColemanâÄôs lawyers proposed that recount totals âÄî less the ballots that elections officials declared lost âÄî be applied toward recount numbers instead. In his opening statement, Franken counsel Hamilton dismissed the Coleman teamâÄôs suggestion as âÄúhigh dramaâÄù and emphasized that the canvassing board decided unanimously to use Election Day totals. Minneapolis Elections Director Cindy Reichert testified before the board last month that the Election Day numbers were correct. SheâÄôll eventually appear before the three-judge panel in this case to testify the same, Hamilton said. To discount the unaccounted-for ballots after Reichert led a days-long, but still fruitless, search would be âÄúan insult to the efforts of local elections officials,âÄù Hamilton said. Opening statements Coleman attorney Friedberg called the race a âÄústatistical tieâÄù and challenged the 14th Amendment guarantee of equal protection in the recount process. Because different eyes had different standards for admitting or rejecting a ballot, on a county-by-county basis, a wide disparity exists when it comes to rejected absentee ballots. Four criteria âÄî correct names and addresses, authentic voter signature, voter registration and that a voter must only vote once âÄî must be met on an absentee ballotâÄôs envelope for it to be admissible. When different elections officials in different counties were more or less stringent in applying those conditions, it needlessly excludes some ballots, Friedberg said. âÄúWe donâÄôt have smart people counties and dumb people counties,âÄù he said. âÄúThe variance comes from one thing: The eyes looking at these unopened ballots.âÄù To remedy that, Friedberg first suggested the three-judge panel review the approximately 5,000 at-issue ballot envelopes. Now the court will wait for the 12,000 subpoenaed rejected absentee ballots to review. âÄúThe absentee ballot issue controls what happens here,âÄù he said. Friedberg asked the court to âÄúdo the best you can to level the playing field.âÄù Additionally, he said the court needs to address ballots possibly counted twice, a mistake that could be made during the duplication process. For example, absentee ballots are copied but if a copy isnâÄôt marked as such, a single vote could be counted more than once. Hamilton delivered an opening statement centering largely on the Jan. 5 unanimous canvassing board certification of Franken as Senator-elect. Coleman filed his lawsuit the next day. Hamilton said repeatedly that ColemanâÄôs legal team lacked necessary evidence that the true result of the election was bungled. âÄúThere is a strong presumption of regularity that is attached to every election and there is good reason for that,âÄù Hamilton said, citing the responsibilities vested in trained election judges. âÄúAt the end of the day the evidence in this trial falls woefully short,âÄù he said. And while administrative errors occurred, he said, they likely divided themselves between the two sides and ended in a wash between the candidates âÄî adversely affecting neither over the other. Additionally, most of those mistakes were corrected in the initial ballot review, Hamilton added. âÄúNo election is perfect,âÄù he said. âÄúImperfection is not enough to overturn an election.âÄù Hamilton added: âÄúThe law doesnâÄôt require that an error might have changed the outcome. They must prove an error did change the outcome.âÄù
WhatâÄôs next
The court will reconvene at 9 a.m. today. ItâÄôs unclear what course of action ColemanâÄôs team will take given MondayâÄôs developments. After court adjourned Monday, Coleman attorney Ben Ginsberg dodged questions about his caseâÄôs detour, only hinting that he preferred not to discuss case strategy with reporters. Karlee Weinmann and Alex Robinson are senior staff reporters at the Daily.