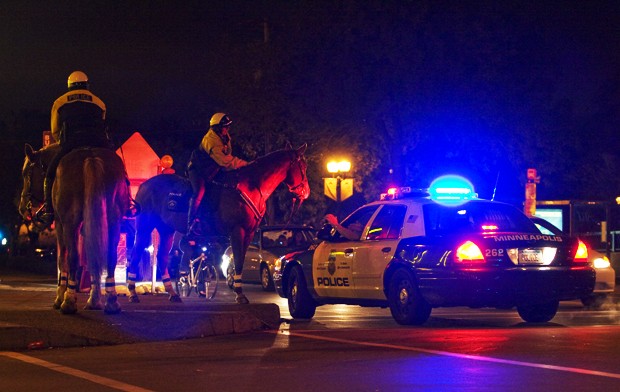 The increasing presence of external police forces on and around campus reveals a complex relationship between the University of Minnesota Police Department and Minneapolis police. Boundaries between the two departments are fluid, but the dynamics of each jurisdiction vary dramatically. For their part, University police are pulled off campus to patrol University satellite locations like the St. Anthony Falls Laboratory. âÄúWe have a vested interest in keeping the neighborhoods around the University safe both because a lot of students and staff and faculty live in those neighborhoods, but also, the safer we can keep the neighborhoods around the University, the safer we can keep the University itself,âÄù University police Deputy Chief Chuck Miner said . In return, Minneapolis police help control traffic and now patrol the University area more heavily on home football game days and on other selected days. The measure is part of a program called Enhanced Police Coverage. Despite any confusion, both departments say the presence of two distinct departments is beneficial. Without a dedicated police department on campus, the University might be vulnerable because of stress put on Minneapolis police in other parts of the city. “[With large, central police departments] there are going to be times when certain jurisdictions aren’t going to get the police service that they want … it’s just a numbers thing,” Minneapolis Police Sgt. Jesse Garcia said. University police are also able to build their department around a more dedicated community that lends itself to more familiarity with those in the area. âÄúOur officers arenâÄôt exactly on a first-name basis with people, but we do try to instill that sense of community in them,âÄù Miner said. Some boundaries have been blurred, but the two departments operate largely in tandem in the areas immediately surrounding campus. Calls taken by the University police dispatcher are routed to Minneapolis police in non-emergency situations or when Minneapolis police are closer. “We have a very close working relationship with them, [and] boundaries are basically crossed in the essence of providing service,âÄù Garcia said. Enhanced Police Coverage brings as many as 12 extra Minneapolis and University police officers to the campus area. The impetus for EPC was the return of football to campus, but certain events with a high probability of turning rowdy are also covered by the University-funded program. Fraternities and other homes near University Avenue fall within the jurisdiction of Minneapolis police, but often deal with University police because of their closeness to campus, yet both police departments and the Interfraternity Council , a governing body of the greek community, have similar objectives. The IFC has bolstered its own near-campus security by hiring private security contractors to patrol Fraternity Row on the weekend of home football games. As a measure of solidarity, the Office for Student Affairs has helped the greek community pay for the security personnel. âÄúThe fraternities see the police as allies,âÄù Interfraternity Council Executive Vice President Dan Garon said. In light of the crowds trolling campus looking for parties, the fraternities actively engaged the police to establish a partnership. âÄúWe needed a mechanism to protect the fraternities from the public âÄ¦ we need the police,âÄù Garon said. Police have said the joint effort has so far proved beneficial. âÄúStudents are doing their part to maintain a good face for the University, and the police are doing a great job of patrolling and being visible, so itâÄôs a combined effort all around,âÄù Garcia said. But recent confrontations near campus have affirmed some need for the added police resources near campus. University and Minneapolis police scattered students in a Sept. 19 fray that Miner said was the biggest incident near campus since AprilâÄôs Spring Jam riot . University police also broke up another series of frays in Dinkytown on Sept. 27.