For product design, he’s the one

The College of Design may create a product design major, partially due to the influence of Barry Kudrowitz. 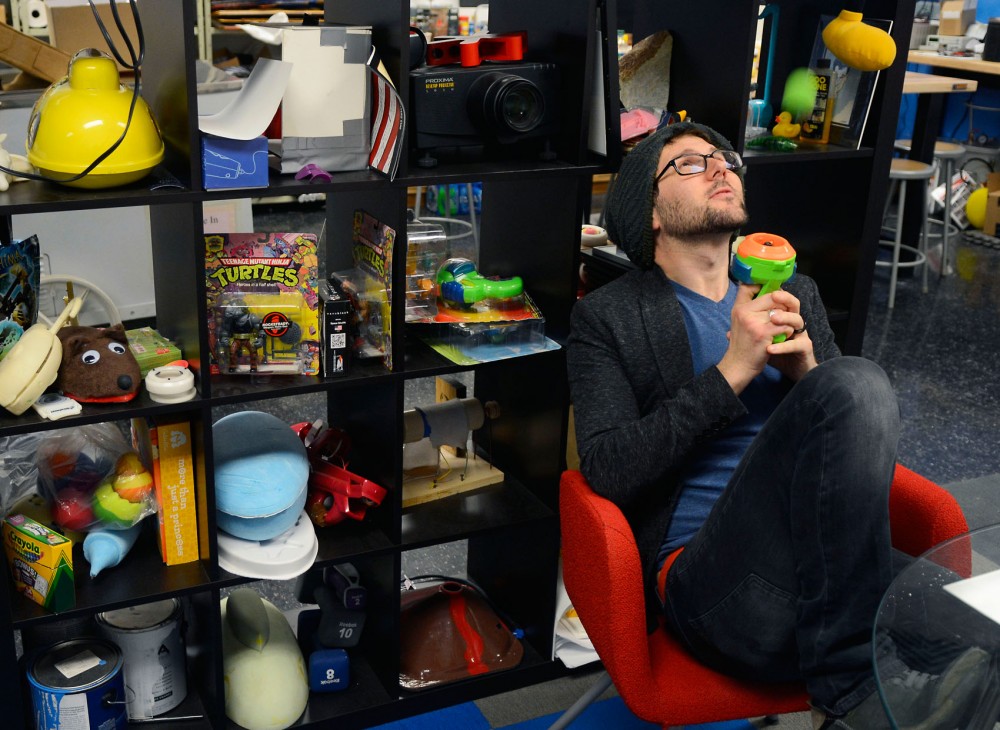 Assistant professor Barry Kudrowitz demonstrates the Atom Blaster, a Nerf toy developed from his master's research in 2005, in his office Thursday. Kudrowitz has taught a Toy Product Design course for 10 years, including four at the University of Minnesota.

Littered with toys, drawings and in-progress inventions, the office resembles a kid’s playroom, and it’s the home base where Kudrowitz leads the University’s growing product design program.

For now, product design is only a minor for undergraduate and graduate students in the College of Design, but student demand for a major is rising.

CDES Dean Tom Fisher said a product design major is possible, but its formation is contingent on finding more faculty members. And finding instructors like Kudrowitz has proved difficult.

“He’s an example of the new generation of faculty coming to the University and into higher ed,” Fisher said.

Since Kudrowitz, 31, came to the University in 2011, he has been instrumental in the product design program’s growth, Fisher said. Some students say they enrolled in product design classes solely based on positive recommendations of Kudrowitz’s classes.

“He likes to have a really good time, but he also knows how to deliver the information in a way that engages and challenges the student to learn,” said interior design senior Jamey Berg, who is a student and teaching assistant in Kudrowitz’s classes.

CDES officials had many failed searches for a product design professor, Fisher said, but that changed when Kudrowitz came along.

His unique work and personality have helped land him on “The Martha Stewart Show” and “MythBusters.”

When Kudrowitz came to the University, he said, there were few teaching jobs available in the field of product design. So when Minnesota had an opening, it was a natural fit.

As the program’s sole faculty member, Kudrowitz has developed his own curriculum, which combines interdisciplinary skills.

Kudrowitz dabbles in many fields and considers himself a designer, engineer, artist and teacher, which has influenced his teaching style.

Kudrowitz grew up in Boca Raton, Fla., and describes his childhood as “normal,” though he was creating new things like plays and obstacle courses from an early age.

He later went to the University of Central Florida for an undergraduate degree in mechanical engineering because he wanted to build theme park rides for Walt Disney World.

Kudrowitz never worked for Disney, but he did help create an elevator ride simulator that’s currently at the International Spy Museum in Washington, D.C.

“He’s obviously sort of a mad genius, and he’s a real renaissance man,” said Dave Kapell, Kudrowitz’s colleague and the owner and CEO of Magnetic Poetry. “He’s a musician and inventor and an excellent artist and writer.”

After getting his undergraduate degree, Kudrowitz applied to several cooking and art schools because he wanted to make theme park rides, cook professionally and become a Claymation artist.

But those plans changed, and he ended up at the Massachusetts Institute of Technology, where he received his master’s and Ph.D. in mechanical engineering.

Kudrowitz didn’t originally intend to become a teacher. But his enjoyment of performing and a stint as an instructor at MIT inspired him to become one.

He’s since discovered that he enjoys the teaching lifestyle, because it allows him to interact with new people each semester and make a difference in students’ lives.

Still, it’s his passion for creating things that keeps him going.

“I like making stuff,” he said. “That’s what inspires me to do anything.”