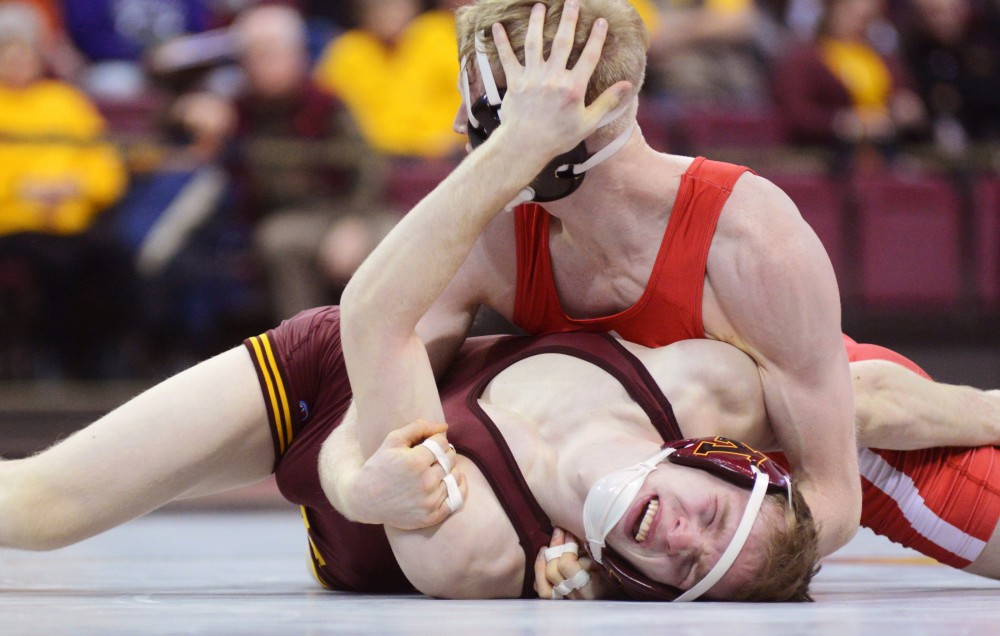 Minnesota wasn’t as fortunate Sunday with No. 3 Oklahoma State (2-0) handing them a lopsided 30-3 defeat.

Minnesota picked up points in six of the 10 matches against South Dakota State, which gave them the win in the road environment.

“It was a tough test for our guys to come out [to South Dakota State], but overall, I think they wrestled really, really well,” head coach Brandon Eggum said on Friday. “I liked the way they competed and in this type of environment, it’s really tough. Great test.”

Minnesota welcomed Tommy Thorn back to their lineup after he missed the team’s dual against Air Force on Nov. 12. Thorn had a strong showing in his dual season debut. He provided the Gophers with four team points by winning a major decision 13-4. Eggum liked the redshirt junior’s performance.

“[He was] great,” Eggum said. “He was attacking both sides very aggressive, especially the way he came out firing his shots. He looked good. It was a good opportunity for him to get out here and wrestle. It was nice to see him go out and perform at such a high level.”

Minnesota also received team points from Owen Webster at 184, Rylee Streifel at heavyweight, Ethan Lizak at 125, Hunter Marko at 149 and Nick Wanzek at 165.

Any momentum that Minnesota may have had going into Sunday’s dual at Oklahoma State wasn’t apparent in their 30-3 loss. The Gophers were outclassed as they only managed to win one of their matches.

“Overall just disappointed” Eggum said on Sunday. “I try not to look at it from a wins and losses [perspective] ever, more just from effort. I thought some guys did a good job but some could have had better effort overall. We were fortunate that Lizak came back in and got a win for us, but we were hoping to pick up a few more on the way. Just in general, I think we wrestled pretty flat.”

The Gopher looked to make a statement on the road against the third-best team in the country. The only bright spot of the evening for Minnesota was redshirt junior Ethan Lizak’s come-from-behind victory at 125. Lizak was trailing 8-1 after one period, but kept his composure and battled back to give Minnesota its only team points of the evening.

“It was a bit of a surprise getting down 8-1 right away after that first period,” Lizak said Sunday. “I knew I have the ability to turn pretty much anyone in the country, so if I could just get to my position, I could start focusing on the turns and getting myself back into the match. [I was] just trying to stay calm.”