A variety of artists attended a weekend conference to discuss hip-hop culture. 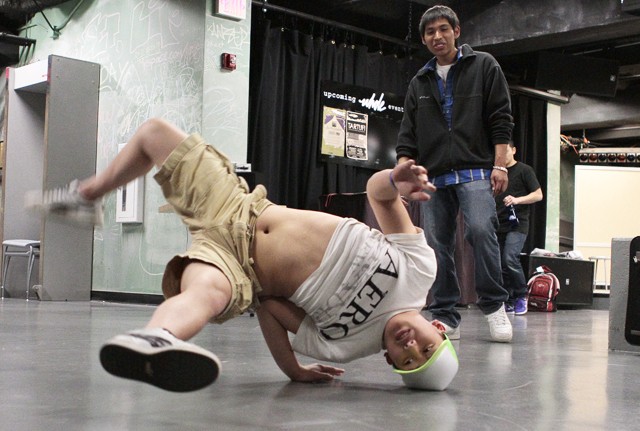 Hip-hop artists, break dancers, spoken-word performers, authors, rappers and poets from all over the country invaded Coffman Union and the Weisman Art Museum this past weekend. The array of artists came to the University of Minnesota campus to learn, teach and perform in the Vices to Verses Conference hosted by the UniversityâÄôs spoken-word and hip-hop student group Voices Merging. More than 65 presenters and 450 students and attendees came to the conference to collaborate on ideas about hip-hop and culture. Voices Merging President Jasmine Omorogbe said the group raised more than $45,000 over the past year for the event. âÄúThis room is so diverse with Asians, Hispanics, blacks and whites talking about gender and class through hip-hop,âÄù Omorogbe said at the conference. âÄúThere arenâÄôt a lot of classrooms out there that look like this room.âÄù The goal of the conference was to present an academic but fun atmosphere to talk about what is going on in hip-hop culture. The conference included a panel called âÄúHip-Hop for Healing: Old Problems, New Solutions,âÄù which focused on using hip-hop and spoken word to help communities. People also got to step away from the academic side of the conference and attend meetings such as the âÄúPoppinâÄô & LockinâÄô DanceâÄù workshop. âÄúPresenters and students were dancing and doing the electric slide and the cupid shuffle at the Radisson last night. That doesnâÄôt happen that often at academic conferences,âÄù Omorogbe said. The conference was free of charge for attendees, which included University students, local area high school students, community members, faculty and staff. One of the conferenceâÄôs presenters, Sha Cage, artistic director of the MN Spoken Word Association, said she was happy to see the younger generation interested in the future of the hip-hop culture. âÄúIt brings a lot of different people from different walks of life, generations and backgrounds to talk about what hip-hop is now in 2010, what isnâÄôt right and how we can fix it,âÄù Cage said. The weekend-long conference also featured a concert Saturday night at the Cabooze, featuring an array of famous artists, including Dead Prez, Toki Wright and the Tru Ruts Crew, as well as a local community showcase Sunday night with some of the Twin CitiesâÄô biggest performers, such as Truthmaze and the Immortal Dance Crew. âÄúHopefully conferences like this will urge people to not just type in Soulja Boy, but to Google something else and to dig deeper,âÄù Omorogbe said.