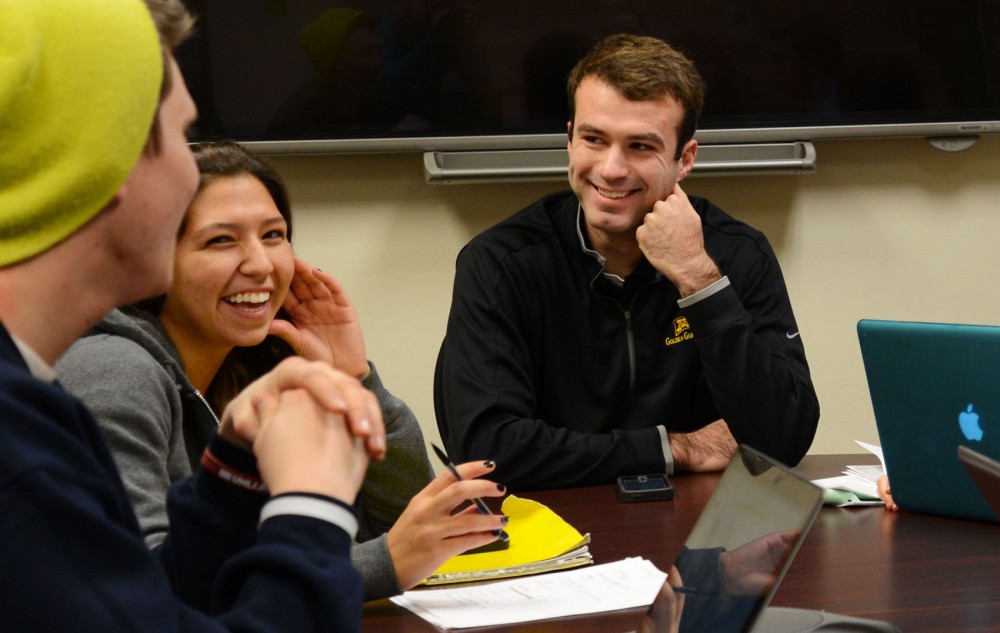 Former Gophers kicker Chris Hawthorne attends a committee meeting while he was a student at the University in Bierman Field Athletic Building on Feb. 17, 2014. Hawthorne recently joined a 13-person committee that will analyze the NCAA's transfer process.

After his first year at North Carolina State University, Chris Hawthorne felt the need to transfer. The Raleigh, N.C., native said he needed a fresh start. âÄúOut of personal and professional necessity, I felt I needed to grow up a little bit and be challenged,âÄù Hawthorne said. He transferred to the University of Minnesota, where he spent three seasons as kicker for the football team and earned a bachelorâÄôs degree in business and marketing over the span of three-and-a-half years. Now, Hawthorne and 12 other coaches and administrators, who represent the NCAAâÄôs Ad Hoc Transfer Issues Working Group, will reassess the associationâÄôs policies regarding the transfer process. The group hopes to tackle the transfer policy for graduate student-athletes, the NCAAâÄôs one-time transfer exception and the associationâÄôs permission-to-contact rules. University of Richmond athletics director Keith Gill, a co-chair for the ad hoc group, said he hopes they can make the policies clearer. âÄúStudent-athletes need to get permission from the institution [to transfer], but a lot of times, to transfer, you need to reach out to the institution,âÄù Gill said. âÄúIf you do it out of sequence, it means you wouldnâÄôt be eligible for financial aid if you didnâÄôt get permission to contact.âÄù That sort of treatment toward student-athletes is not fair, said Amy Huchthausen, a group member and commissioner of the America East Conference. âÄúThe cost of college is pretty expensive whether youâÄôre on scholarship or not,âÄù Huchthausen said. When addressing the transfer rules for graduate student-athletes, the group will have to consider the value of athletics in an academic setting, Huchthausen said. âÄúA student-athlete has graduated and done everything weâÄôve asked them to do. Should they, then, as a sort of reward, be able to transfer immediately and play wherever they want? Or, because weâÄôre still in the context of higher [education], are these students going to get a degree or just going to play?âÄù Huchthausen said. âÄúIf this is higher [education], we should do everything we can to make sure they get a degree.âÄù The group will present recommendations to NCAA officials after discussing and researching the current transfer policies and how student-athletes are impacted by them. Hawthorne now serves as director of the Falcon Club at Bowling Green State University and has a position on the NCAAâÄôs Student-Athlete Advisory Committee, which has led to his work on the potential policy changes. He said he thinks his experiences as a transfer student-athlete will provide the rest of the officials mulling the changes with valuable context. âÄúAnytime you have a student-athlete in the room or on the committee with an active seat at that table, where theyâÄôre relied upon and leaned on for insight and conversation as to how this would impact and affect student-athletes âÄ¦ thatâÄôs very important,âÄù Hawthorne said. NCAA data gathered from 2011 and 2012 show that only 24 percent of football players and 32 percent of menâÄôs basketball players who were transfer students were able to fulfill their degree. The group will consider those statistics at its first discussion later this week, Hawthorne said.