Heat takes a toll on runners at Roy Griak Invitational

An ambulance picked up several competitors at the conclusion of cross country races. 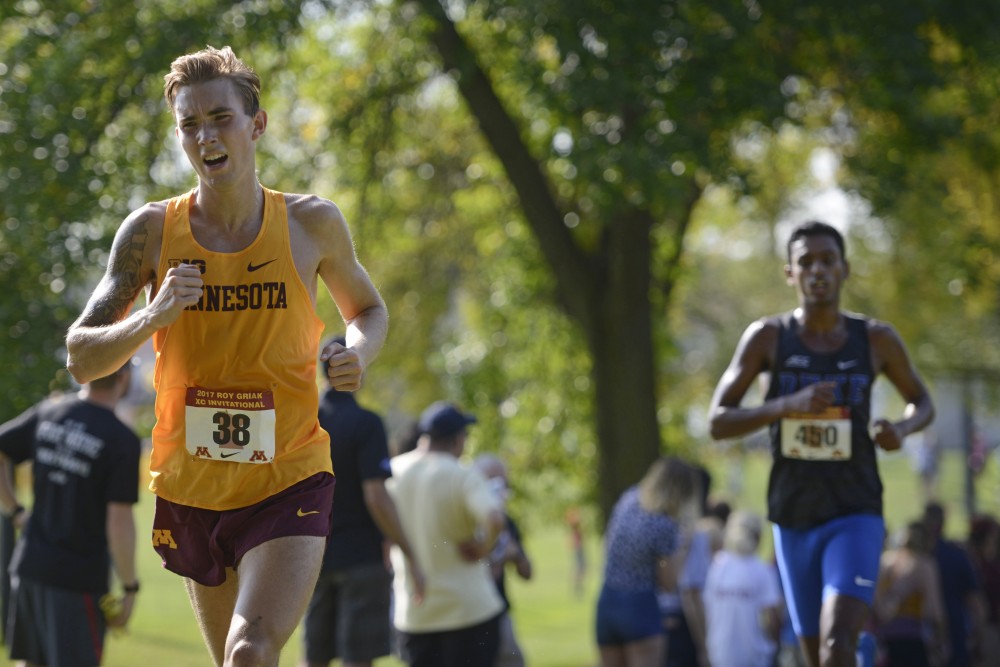 Charlie Lawrence competes at the Roy Griak Invitational at the Les Bolstad Gold Course in St. Paul on Saturday, Sept. 23.

The temperature proved dangerous for those competing in the Roy Griak Invitational on Saturday. Multiple runners passed out due to heat after the three collegiate races, and an ambulance made trips from the race to the hospital.

Despite the challenges in 90-degree heat, the Gophers placed fourth overall at the Roy Griak Invitational at Les Bolstad Course, with three runners in the top 25.

“We had some difficult conditions to run in today, and that certainly didn’t make things easy for anybody,” head coach Steve Plasencia told Gophersports.com. “I thought we had a couple nice performances today despite the weather.” Plasencia did not interview with the Minnesota Daily for this story. He left Les Bolstad after the race to go to the hospital.

Charlie Lawrence led the Gophers with a 12th-place finish and a time of 25:37.9, his best finish at the Roy Griak Invitational. This is the second time Lawrence has finished in top position for the team this year. Obsa Ali finished 21st in his season debut with a 25:52.5, while Derek Wiebke finished with a 25:58.1, rounding out the top 25.

“I always race better when I’m enjoying it,” Wiebke said, who celebrated his birthday that day. “I just had to push through the pain.”

“It’s always great to come out and celebrate coach Griak’s legacy here at the University of Minnesota and in the cross country community,” Plasencia told Gophersports.com.