BioBlitz challenged the public to race to identify animals, plants and fungi. 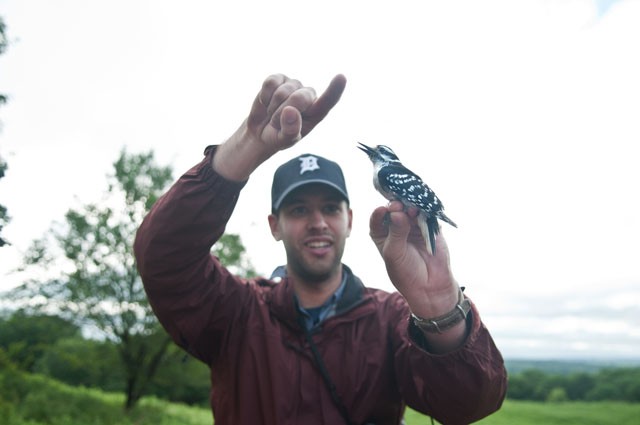 Ecology grad student Michael Wells holds a Downy Woodpecker in his hand at the Katharine Ordway Natural History Study Area Saturday in Inver Grove Heights. Bio Blitz is an intensive 24 hours race to find all the plants and animals at a specific location which helps biologists to identify different plants and animals.

Yelva Lynfield watched intently as Hernan Vazquez, a graduate student at the University of Minnesota, showed her how to properly hold a song sparrow.

The tiny brown bird perched calmly on her fingers as Vazquez taught a small crowd of nature enthusiasts how to determine if a bird is male or female at this yearâÄôs BioBlitz in Inver Grove Heights, Minn.

BioBlitz, organized every year by the UniversityâÄôs Bell Museum of Natural History, brings nature experts and the public together in a race to identify as many species of animals, plants and fungi as they can within 24 hours.

Lynfield, a retired dermatologist with a soft spot for nature, volunteers with the National Park Service and the Science Museum of Minnesota, among other places.

âÄúItâÄôs so nice to see them up close,âÄù Lynfield said as she examined the sparrow in her hand.

The event is held in a different place around the metro area every year.

âÄúWe tried to stay within the metro area to maintain the âÄòWhatâÄôs in your backyardâÄô feel,âÄù said organizer and coordinator at the Bell Museum, Jennifer Menken.

In its eighth year, participants traveled to the Katharine Ordway Natural History Study Area  in Inver Grove Heights, a parcel of almost 300 acres of land managed by Macalester College.

BioBlitz offers the chance to collect a lot of information about an area in a short period of time, Menken said.

Participants are able to take part in a number of events. On Friday, volunteers cleaned up the river, collected insects and spent the night stargazing.

Saturday kicked off at 6 a.m. with a bird hike. Later in the morning, graduate students from the University collected birds through a process called mist netting.

Matt Dufort and Mike Wells, graduate students in ecology at the University, strung up a fine mesh net between two poles in a dark wooded area to catch birds without hurting them.

Dufort said they are also taking note of the species, the age, the sex and the breeding conditions of the birds.

As Wells held a restless downy woodpecker that repeatedly pecked at his fingers, Dufort explained to the group of onlookers that the woodpeckerâÄôs tongue wraps around and attaches at the back of the skull.

The group continued to question the students as they worked, and they were more than happy to share their knowledge of the subject.

Menken said experts in all areas come to the event. There were âÄúinsect people,âÄù âÄúfish people,âÄù âÄúfungi peopleâÄù and more, all of whom contribute to the collection and identification of species.

By Monday, 454 species had been identified, but Menken said that number would grow âÄî certain species of insects had to be taken back to labs for proper identification.

Only 100 people showed up for this yearâÄôs BioBlitz, which Menken attributed to rain and competition.

More than 200 people typically show up to each yearâÄôs event, she said.

Lynfield, who has attended one other BioBlitz in the past, said she went Saturday to learn something new about nature.

âÄúItâÄôs just a wonderful thing to know,âÄù she said. âÄúThe world is a wonderful place.âÄù