Doughnuts and a dream 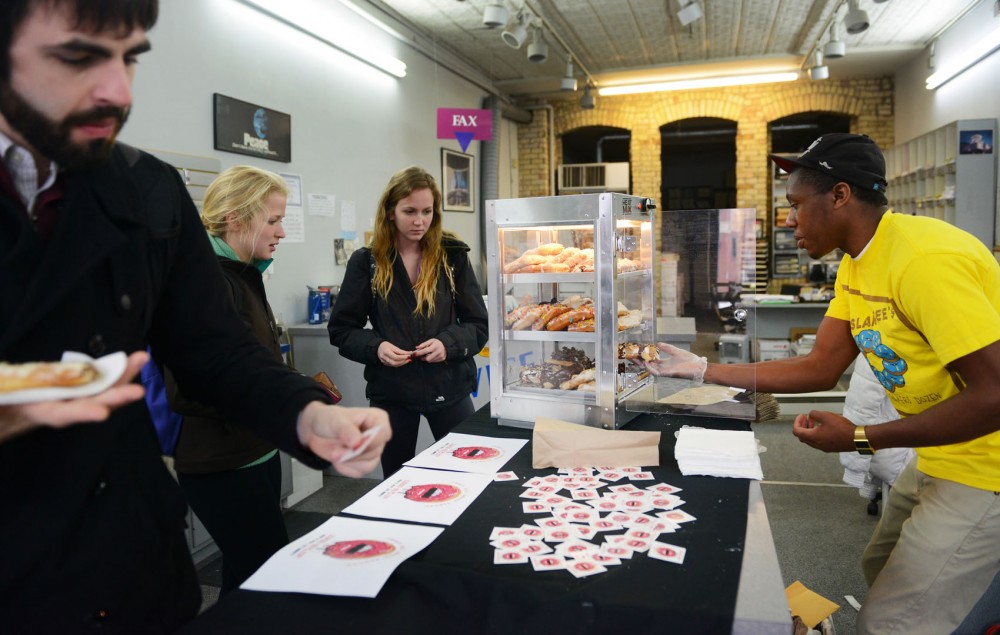 Bradley Taylor said his doughnuts’ recipes require a cup of sexy and swag.

The recent University of Minnesota graduate started delivering doughnuts in November. And recently, his operation — Sssdude-Nutz — started hosting pop-up shops in Dinkytown. With hopes of opening a storefront one day, the young entrepreneur is spreading the word about his pastries and learning the ropes of running a business.

After transferring to the University from El Camino College in California, Taylor found that the Twin Cities is a doughnut-shop desert compared to his hometown of Los Angeles.

Last September, Taylor buckled down on baking. He said the art of crafting a doughnut recipe shouldn’t be taken lightly, and he prides himself on finding a recipe from nontraditional sources — and not simply an online search engine.

“I kind of treat it like a book for me. I can’t just go to Barnes and Noble and be like, ‘That looks like a good book; let me read it.’ The way it comes through word of mouth, like, ‘You should read this book, it’s pretty good,’” Taylor said.

The Sssdude-Nutz doughnut recipe came from a person’s grandmother in Arkansas, he said, and after first seizing it, he perfected it to his own standards.

Taylor often brought his experiments to his friend’s house, where he said his crew offered feedback.

When Taylor started getting requests for doughnuts from even his friends’ friends, he decided he could take the idea further. He started a Saturday delivery service, and in February, he opened his first pop-up shop.

The name “Sssdude-Nutz” came from a problem Taylor had during his adolescence — when he had braces, he couldn’t say the word “dude” right.

“When we first met he’s like, ‘What’s up, sude?’ and at first, I thought he was just saying dude with an accent,” Perry said. “I used to give him a mess for the name of the [doughnut] place, but it’s him.”

After he graduated from the University, Taylor took a job as a technical recruiter. But with that job, he said, he couldn’t express his individuality like he wanted.

“I hate having to wrap myself in this weird bubble and be this fake person; I hate it. What you see with Sssdude-Nutz is completely me. The way you talk to me, if we went out and hung out, you’d be like, ‘OK, it makes sense,’” Taylor said.

Taylor also spices up his Sssdude ’tude by calling his doughnuts “The Sandlot,” “Daywalker” and “Rick James Bi!ch” — all references to his favorite movies or inside jokes with friends.

Taylor said he considers Dinkytown’s atmosphere and Minnesota’s friendly, Midwestern vibe as factors in his business’ ability to grow.

“If I tried to do this in California, it’d be so much harder, in a way, because everyone’s so stand-offish,” Taylor said. “I love talking to people, so people already being open to that here definitely helped it get to where it is locally, faster.”

Apartment complexes allowed for Sssdude-Nutz sampling tables in their lobbies, which Taylor said helped him advertise and prepare for a pop-up shop.

“He was just super friendly and interacted well with the residents,” said Cayce Gearrin, leasing and marketing manager at The Marshall.

When the business picked up in November, Taylor started using a community kitchen to cater to the needs of the growing food business. Recently, he asked Alec Duncan, owner of Potter’s Pasties and Pies, for some space in his kitchen in exchange for volunteer work.

Duncan said he started his business in a similar way to Taylor.

“I saw the same sort of glimmering eyes of an entrepreneurial goal and thought process and dream … so I said ‘Sure, awesome,’” Duncan said.

Taylor said helping in Duncan’s kitchen has taught him about the restaurant business and gives him the chance to learn entrepreneurial wisdom from the pasty expert.

“It was hectic right away; there was a bunch of people that kept coming, and he sold out within the first hour-and-a-half,” said general manager Matt Price.

By using the pop-up shop system, Taylor said he’s able to figure out the details of running a business while avoiding too many financial risks. Also, he said, the shops carry a surprise factor and attract customers when they’re announced.

“It’s kind of mysterious in a way, but one thing [costumers] remember is the quality of our doughnut. You always leave with that,” Taylor said.