Gophers bounce back from Friday loss to beat Northwestern 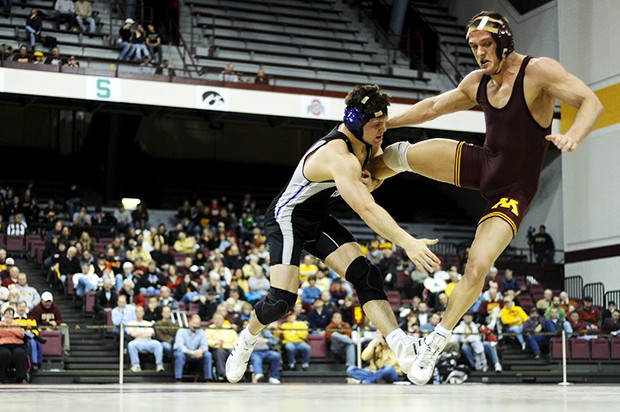 The final matches in both of the Minnesota wrestling teamâÄôs duals this weekend elicited seemingly contradictory reactions. On Friday night, as sophomore heavyweight Ben Berhow was headed toward a 5-2 win, the Gophers looked on in angst. Sunday afternoon, on the other hand, the wrestlers hopped up happily after senior Tyler Safratowich fell 10-3 to Jason Welch. ThatâÄôs the nature of dual meets. They can be decided before the last match even begins, or they can be entirely up for grabs. This weekend, both of MinnesotaâÄôs were of the latter variety. The 8th-ranked Gophers trailed No. 18 Michigan 17-13 when Berhow took the mat Friday, meaning he needed at least a major decision to avoid a Minnesota loss. He came away with only a decision and the Wolverines snuck away with a 17-16 win. On Sunday, the Gophers were leading Northwestern 18-13 entering the final bout that featured No. 17 Safratowich and No. 14 Welch. Only a pin by Welch would have meant a Wildcats victory, and despite a furious attempt, he only managed a decision, leaving Minnesota on top for an 18-16 victory. As head coach J Robinson predicted earlier in the week, both duals were âÄúdog fights.âÄù In fact, both were decided entirely by bonus points. âÄúItâÄôs been crazy with this team,âÄù head assistant coach Joe Russell said after SundayâÄôs win. âÄúWeâÄôve had a lot of 5 to 5 dual meets and if you get the bonus points you win. ThatâÄôs kind of how itâÄôs gone for us. On Friday night, they got one more than us, today, we got a couple more than they did. ItâÄôs going to be a battle when youâÄôre out there in Big Ten dual meets.âÄù No bout was more of a battle than SundayâÄôs marquee matchup at 125; only a bonus point could decide the match between Gophers redshirt freshman Zach Sanders, ranked seventh in the country, and NorthwesternâÄôs third-ranked Brandon Precin. In the second period, Precin looked as though he would pin Sanders, but Sanders kept his shoulders up and Precin settled for a three-point near-fall. Still, Sanders trailed 5-0 entering the final period. But it was far from over. Sanders scored a pair of takedowns in the third, and in the final seconds, he nearly stuck Precin and recorded a three-point near-fall of his own to level the score at 7-7. Precin had the advantage in riding time, however, and was awarded a bonus point, winning 8-7. âÄúHeâÄôs never out of a match,âÄù Russell said. âÄúHe was way down in that match, but heâÄôs going to wrestle hard for seven minutes and give you everything he can. Good things happen when you do that. He came up a little bit short today but I think he knows he can battle with guys.âÄù Junior Jayson Ness had the most successful weekend for Minnesota at 133, recording a pair of major decisions. Berhow and sophomore 165-pounder Scott Glasser notched two victories as well, but their Sunday wins were major decisions while FridayâÄôs were not. Those two extra points were the difference between winning and losing. âÄúThey got the major decisions when we needed them,âÄù Ness said after SundayâÄôs dual. And as senior captain Tyler Safratowich realizes, chances are these wonâÄôt be the last duals decided by nothing more than a bonus point here or there. âÄúYouâÄôre going to have duals where you come out on fire and youâÄôre going to have duals where you come out a little flat, and itâÄôs just the smallest little things that are going to win or lose a dual. Friday night, we didnâÄôt have anyone step up and make that one extra move or get that one extra team point. Today, we did.âÄù