Local podcast “XOXOJK” is 58 episodes in, and there’s still a lot left to talk about. 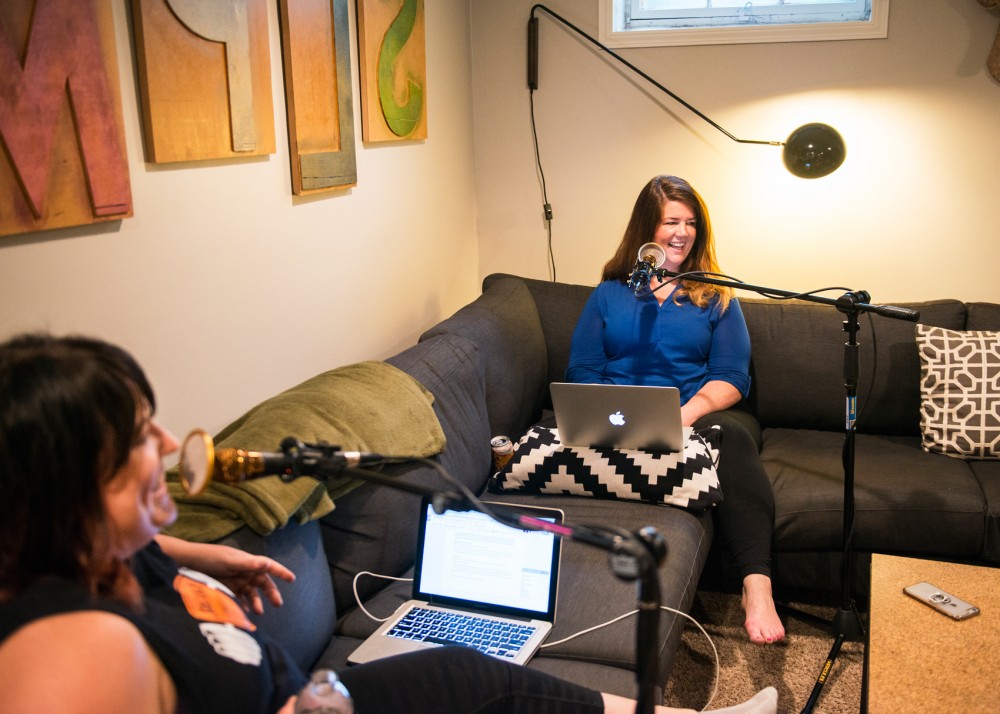 Kate O'Reilly, right, and Jenn Schaal record an episode of the podcast "XOXOJK" on Sunday, June 5. The two women meet weekly to discuss "real stuff, funny stuff, good stuff and all the stuff in between."

Kate O’Reilly and Jenn Schaal were Twitter friends, finding companionship in favorites and understanding in retweets. When the two women finally met in person, their conversational propensity never faltered.

Once the women had established close rapport, their friends suggested they make a podcast. O’Reilly’s boyfriend proposed a title: “XOXOJK” — hugs and kisses, Jenn and Kate.

“We had no production guide, no idea for topics, just the name,” O’Reilly said.

Almost two years later, “XOXOJK” has grown into a full-fledged endeavor. The weekly podcast is now a platform for the women to share their ideas, perspectives on world news, Twin Cities’ happenings and the intricacies of their personal lives.

Over time, the title has taken on meaning of its own. The podcast is balanced between Schaal and O’Reilly’s dispositions. Schaal is more cynical than O’Reilly, for example.

The first episode of “XOXOJK” came out in fall 2014, at a time when the Twin Cities podcast scene was very much male-dominated. Over the years, the women have watched the gender gap narrow.

One thing that the women find important is their commitment to frankness. Not ones to be shy away from tackling what may be deemed offensive material, the two are informed and fiercely feminist.

“There were a lot of high-profile shows with very selective subject matter. More newsy podcasts talked about events in general, but no, ‘What do we actually think about this? How does this affect us?’” O’Reilly said. “Someone running for president might say something very anti-trans, so we’re there to say, ‘This is the article, this is what happened, this is what is wrong.’”

When the women sit down to record a podcast in O’Reilly’s in-house studio, they do a few episodes at a time. They reserve their catching-up for on-air time. As a result, their conversations are organic and candid.

Most episodes are titled with a quotation from the recording. “I Am Also on Bret Michaels’ Wikipedia Page,” the title of the show’s first episode reads — not necessarily contextual but always engaging.

Guests are a common fixture on the show. Nora McInerny Purmort, local author of the memoir “It’s Okay to Laugh: (Crying is Cool Too)” — released in May — was a recent interviewee.

Guests of “XOXOJK” add to O’Reilly and Schaal’s witty dynamic.

A professional consultant, O’Reilly understands the pros and cons of different types of media.

“Podcasts are different because there’s a freedom in knowing that people can’t see your words on a page. They have to invest in listening in order to hear all of the things you’re saying. There’s a huge responsibility to something being recorded,” O’Reilly said. “It’s the perfect medium for where we are in the world right now. The context is key to moving forward together.”

Katie Crawford was a Twitter follower of O’Reilly’s when she read news of the podcast’s release. She decided to give it a listen and is now referred to as the unofficial “XOXOJK” fan club president.

“I find Jenn and Kate so relatable. In my own experience, whether it’s approaching career or relationships or friendships, they offer this ideal mix of practical and insightful advice delivered with the perfect amount of humor. It feels like I’m sitting down to brunch with them when they’re in my earbuds,” Crawford said.

As “XOXOJK” has grown, the women have proven they’re not shy about making use of their platform.

“We need to give ourselves and our sisters and our self-identified sisters permission [to be]. We need to move each other forward. If you can move a fellow woman forward, then that’s your job,” O’Reilly said.