Sherels back for game with Boilermakers 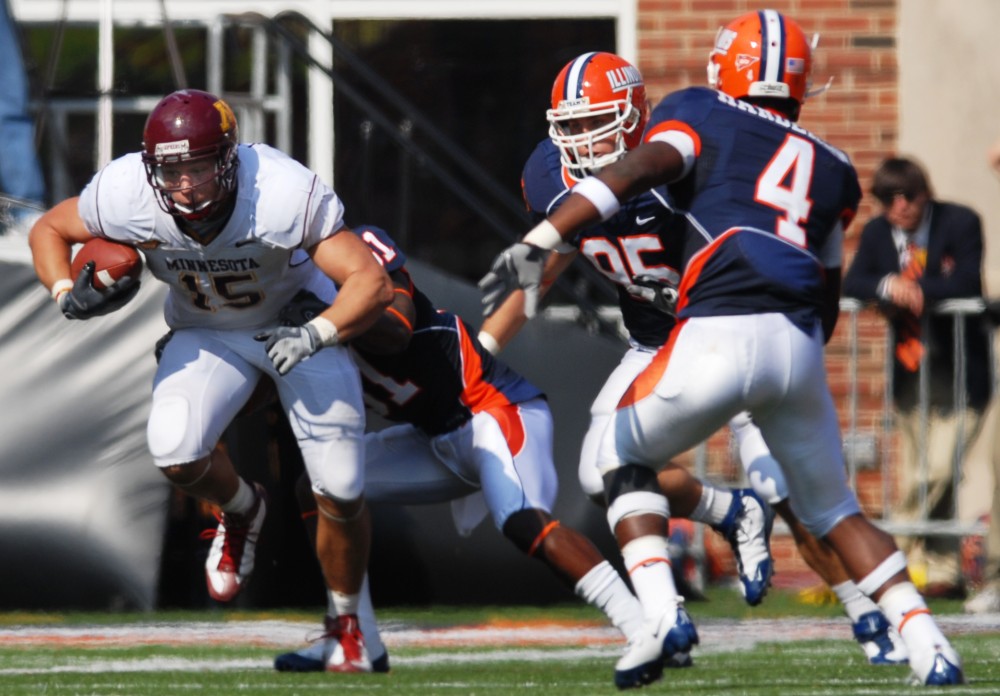 Purdue hasnâÄôt beat a ranked team in its last 16 tries . They might be surprised to have a chance at breaking that streak this weekend against the Gophers, a team they were favored to beat heavily at the start of the season. The Gophers slipped into the No. 25 spot in both major polls this week, their bye week, benefitting from several Top-25 upsets and their Oct. 11 upset at Illinois. But the Gophers (6-1, 2-1 Big Ten) have been quick to downplay what their ranking means, and slow to consider themselves favorites. âÄúI think we’re the underdog everywhere we go this year,âÄù linebacker Simoni Lawrence said. âÄúThat’s how I think of things. If you don’t win any Big Ten games the year before, you’re an underdog everywhere you go. Because they beat you last, and whoever won last is on top. It doesn’t matter if you’re ranked or not.âÄù Las Vegas casinos donâÄôt see the Gophers as favorites either, despite facing an unranked Purdue team thatâÄôs 2-5 and 0-3 in the Big Ten. The game is listed as a âÄúPick-em,âÄù with no point spread in either direction . Perhaps itâÄôs because itâÄôs the BoilermakersâÄô homecoming . Or that they beat the Gophers by two touchdowns last year . Or the fact that Minnesota hasnâÄôt won in West Lafayette since 199 0. âÄúA lot of people still don’t have respect for us, and think it’s a courtesy vote that we’re in the top 25 and we didn’t play anybody yet,âÄù senior captain Willie VanDeSteeg said. âÄúObviously if that’s what they think, you have to go out and keep proving to them that we belong up there.âÄù None of MinnesotaâÄôs wins have come against ranked teams, and their non-conference schedule consisted of Northern Illinois, Bowling Green, Montana State and Florida Atlantic . But theyâÄôve shown improvement regardless of their competition, particularly on defense. They held Illinois, then the Big TenâÄôs second ranked offense, to just six points through three quarters their last time out . They rank third in the nation in takeaways (20) and second in turnover margin (plus-12). The defense will improve with the return of cornerback Marcus Sherels . The sophomore, whom Brewster calls teamâÄôs best defensive back, hurt his shoulder against Indiana and missed the Illinois game. âÄúMarcus is a quiet guy but he’s somebody that you know on the field is going to get the job done,âÄù Lawrence said. âÄúIf you have any questions, he’ll know your responsibilities. He’s a real smart football player.âÄù SherelsâÄô presence will be particularly important against the Boilermakers, who have the second best passing offense in the Big Ten , averaging more than 250 passing yards per game . Senior quarterback Curtis Painter reached the 10,000-yard passing mark earlier this season . âÄúWe picked a good week to start getting healthy, because itâÄôs going to be a tough one as a defense,âÄù VanDeSteeg said. âÄúWe know exactly how good they are passing the ball.âÄù The Gophers are a virtual lock to make a bowl game, but, with the chance at being favorites in all five of their remaining games, could take a big step towards making a New YearâÄôs Day bowl with a win Saturday. âÄúPeople are telling me, âÄòYou guys are changing things around. We’re seeing you on ESPN now, we don’t just have to look on the Big Ten Network,âÄôâÄù Lawrence said. âÄúIt feels real good and I just want to keep it up. I don’t want to let it die down.âÄù