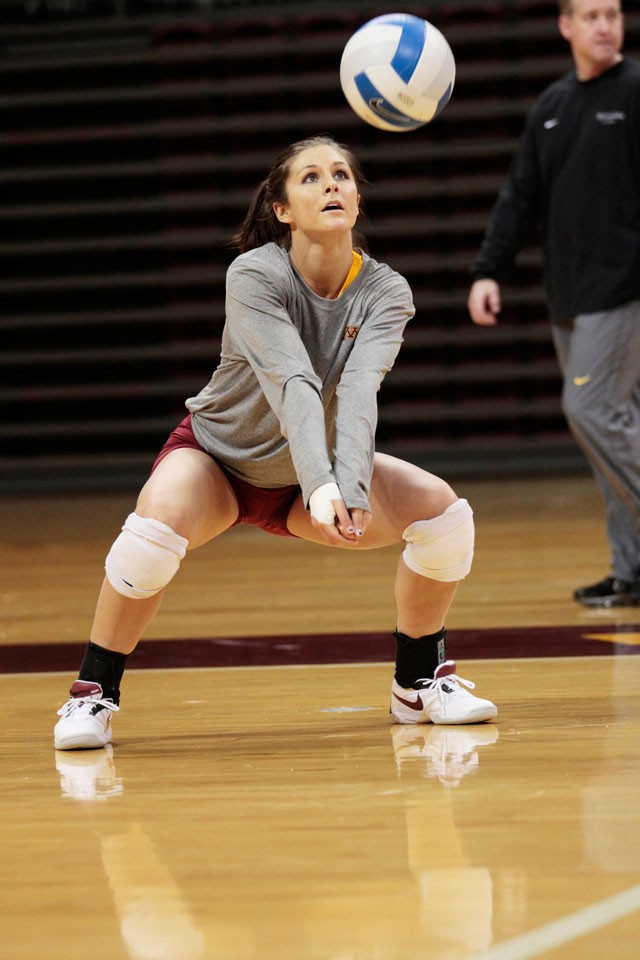 Junior Jessica Granquist volleys the ball on Tuesday during practice at the Sports Pavilion. Granquist was named Big Ten Defensive Player of the Year.

Junior Jessica Granquist came to Minnesota knowing sheâÄôd spend two years waiting for her chance to take over the teamâÄôs libero position. Defensive specialist Christine Tan, a junior when Granquist joined the team, had already controlled the starting spot for a year. She didnâÄôt panic about the length of her pending wait, knowing sheâÄôd be a better player for following in TanâÄôs footsteps. âÄúThe first year was definitely a learning year for sure, learning the college speed, learning how to play at the college level,âÄù Granquist said. âÄúThe second year was really taking in everything that [Tan] does and really just engaging and learning what she does that benefits the team the most. This year was applying those skills that IâÄôve learned and the roles that I saw her play and implementing those with the team.âÄù For both Granquist and the 12th-ranked Gophers, the wait was well worth it. Granquist, who averages 5.22 digs per set, helped lead the Gophers to a 24-8 record and a No. 10 seed in the NCAA tournament. They host North Dakota State in the first round Friday night. She also earned Big Ten Defensive Player of the Year, a fitting award for the libero whose on-the-court role model Tan also received the award as a junior in 2008. âÄúIâÄôm really happy to receive the award, but IâÄôm really focused on the tournament and my team,âÄù said Granquist, who also earned Big Ten Defensive Player of the Week three times this season. âÄúI donâÄôt take a lot of responsibility for it because thereâÄôs no way I could have gotten the award without the set-up of the front row as well as my coaching staff, aligning everything and teaching me and coaching me.âÄù She added: âÄúItâÄôs nice, itâÄôs a compliment, but I donâÄôt take it too far because we have a lot of work to do still.âÄù Granquist also was the only Big Ten libero named to the first-team All-Big Ten team, along with senior middle hitter Lauren Gibbemeyer, who made the team for the third time. Gibbemeyer, who averages four kills per set and notched a career-high 25 kills against Penn State on Saturday, was also named the National Player of the Week by College Volleyball Update, the second player in Minnesota history to receive the award. But the post-season awards werenâÄôt just reserved for the team veterans. Freshmen Tori Dixon and Ashley Wittman both made the Big Ten All-Freshman team, with Dixon also receiving first-team honorable mention. âÄúWeâÄôre in a much better position as a team now than we were back in September,âÄù head coach Mike Hebert said. âÄúThe team has decided to pull itself together and trust itself and play in a fashion that resembles a team with great chemistry.âÄù The Gophers, who have lost five players throughout the season due to injury, won nine out of their last 10 matches and are riding a seven-match winning streak. They hope to continue that pattern this weekend with the first and second rounds at the Sports Pavilion. With a win, Minnesota would face the winner of Iowa State and Creighton on Saturday. ItâÄôs a familiar match-up for the Gophers, who swept North Dakota State in the first round of the 2008 tournament. They then dropped a four-set match to Iowa State in the second round âÄî a match the older members of the team remember all too well. âÄúItâÄôs going to be huge,âÄù Granquist said. âÄúI really, really want to play Iowa State. Coming from my freshman year when they took us out, itâÄôs going to leave for a great match. Both teams are just going to be gunning for each other.âÄù