The Gophers beat North Dakota 3-2 at Ridder Arena in the longest game in program history. 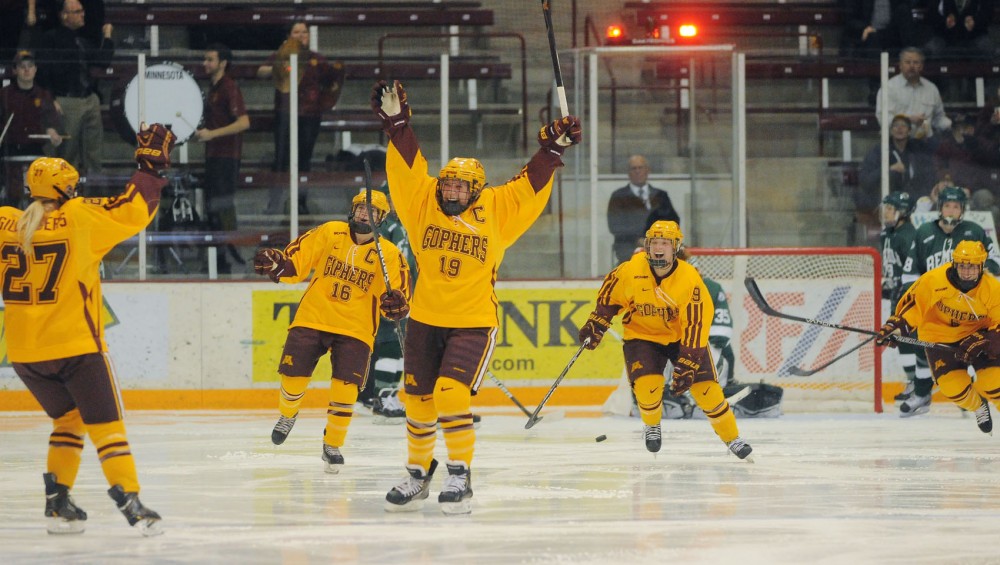 Minnesota players cheer after scoring their fourth goal against Bemidji State on Saturday, March 2, 2013, at Ridder Arena. The Gophers crushed Bemidji State 8-0 to advance to the WCHA Final Face-Off next weekend.

It took the Gophers women’s hockey team the equivalent of two full regulation games Saturday at Ridder Arena to keep its season alive and advance to the NCAA Frozen Four.

“When you’re in the midst of it, it’s just so surreal,” Gophers head coach Brad Frost said. “You’re just so focused on trying to find a way to get the biscuit in the basket.”

Judging from the first minute of play, the Gophers looked to be headed for their seventh straight shutout. Freshman forward Hannah Brandt scored 52 seconds into the first period, assisted by junior forwards Amanda Kessel and Bethany Brausen.

North Dakota head coach Brian Idalski said his team would have folded after the early goal last year. But Saturday, the team responded with an equalizer six minutes into the first period by senior forward/defender Ashley Furia.

Gophers senior defender Megan Bozek gave up what proved to be a dangerous penalty at the end of the first period. With the score tied 1-1 at the start of the second period, North Dakota capitalized on its leftover power play when freshman forward Meghan Dufault scored.

The Gophers used a power play of their own to tie the game as Kessel scored with four minutes left in the second period.

The next goal didn’t come for almost 80 minutes.

Frost said the pace of the game slowed substantially for both teams as the overtimes wore on, but the game was no less exciting.

“Man, there were so many chances both ways,” Frost said. “And both goalies played absolutely tremendous.”

RÃ¤ty said she never lost energy throughout the overtimes and “could have played the whole night.” The drive to play in the Frozen Four kept her focused and motivated.

While RÃ¤ty did her part, the Gophers’ offense needed a power play to score the long-awaited goal.

Senior defender Mira Jalosuo sent the puck toward the net from distance while sophomore forward Rachael Bona and Terry and fought in front of the net. Terry poked home the game-winner.

The goal went under a short review, but that didn’t stop the Gophers’ or fans’ celebration.

Idalski said he thought the stars were aligned for North Dakota. But it wasn’t enough to unseat Minnesota.

“I talked to the kids a little bit after like, ‘You know what, you gave, arguably, the best women’s hockey team in the history of the game so far everything they could handle. You should be proud of that,’” Idalski said.

North Dakota’s senior forward Jocelyne Lamoureux said the only way to sum up how her team felt is disappointed.

“We gave them everything they could handle,” Lamoureux said. “I would be surprised if anyone gives them a game like that next weekend.”

Bozek said it was important for the Gophers to grind out the win, but the epic nature of the game wasn’t lost on her.

“I don’t think I’ve ever played a team six times [in a season] and beat them all six times,” Bozek said. “I think I take it to heart more considering this could have been my last game, for me being a senior.”

The Gophers will face Boston College on Friday in the NCAA semifinal at Ridder Arena. Boston University and Mercyhurst will battle for the other championship spot.