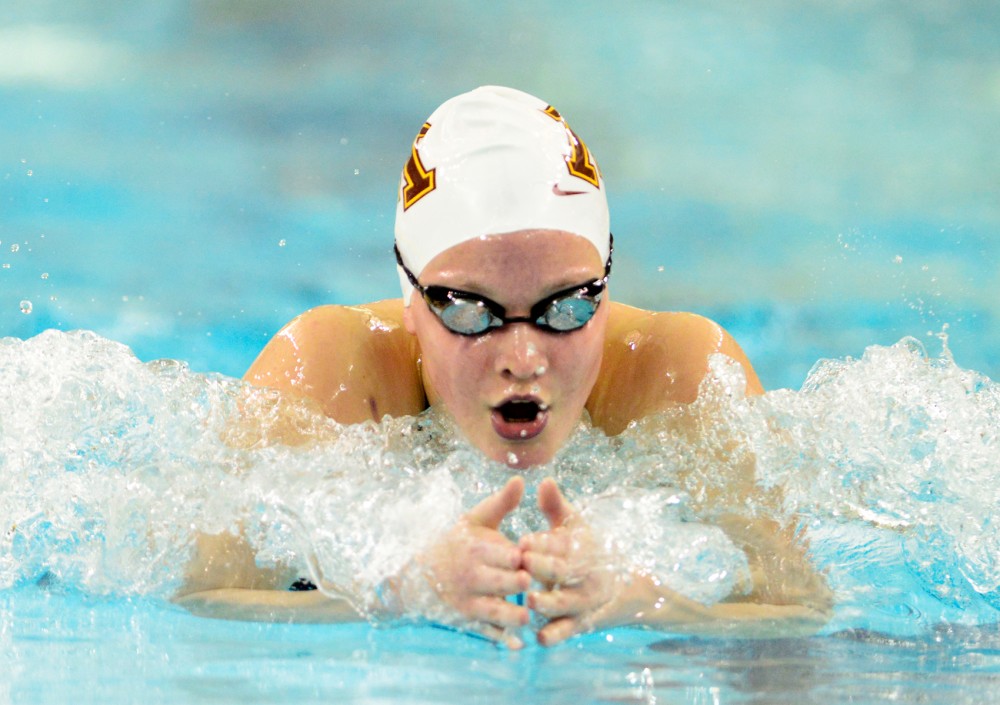 Thomas Jaakola
Junior diver Yu Zhou highlighted the Gophers’ third-place finish at the Big Ten Championships over the weekend, winning three events to earn her second consecutive Big Ten Diver of the Year award.
The Gophers, finishing third on the day, ended with a team score of 927.50 points in Ann Arbor, Mich., breaking the team’s streak of four Big Ten titles in a row. Michigan took first with 1,361 points, and Indiana placed second with 1,207.5 points.
“It was a true team effort, and I’m really proud of how the team responded and how they really came together, and the divers did a tremendous job,” head coach Kelly Kremer said.
Zhou won the 1- and 3-meter dives for the second consecutive year, scoring 352.45 and 407.05 points in each event, respectively. She also scored 363.20 on the platform dive for her third conference title of the meet and fifth of her career.
Junior Lexi Tenenbaum finished third on the 3-meter dive with 354.80 points and fourth on the platform with 305.40.
In races, Minnesota’s 200 medley relay team of freshmen Zoe Avestruz, Rachel Munson, sophomore Danielle Nack and senior Lauren Votava took second place in a time of 1:37:27.
Avestruz, Nack, Votava and junior Abagail Raatz finished fifth in the 200 freestyle relay in 1:29.72.
Sophomore Brooke Zeiger was second in the 400 individual medley with a time of 4:08.18. Junior Breanne Siwicki finished close behind in a season-best time of 4:10.19.
Nack placed second in the 200 butterfly for the second year in a row with 1:56.55 and finished third in the 100 butterfly with a personal-best time of 52.64.
Votava finished fourth in the 100 freestyle in a time of 48.48 and in the 400 freestyle relay with Nack, Avestruz and Raatz.
“I think finishing third behind Michigan and Indiana was respectable,” Zeiger said. “I think the loss will help us realize what our goals are and what needs to be done as a team if we want another title. The whole meet was a good learning experience for everyone, though. It was exciting to see a few freshmen step up and rise to the challenge during such a high-stress meet.”
Delete Image
Align Left
Align Center
Align Right
Align Left
Align Center
Delete Heading