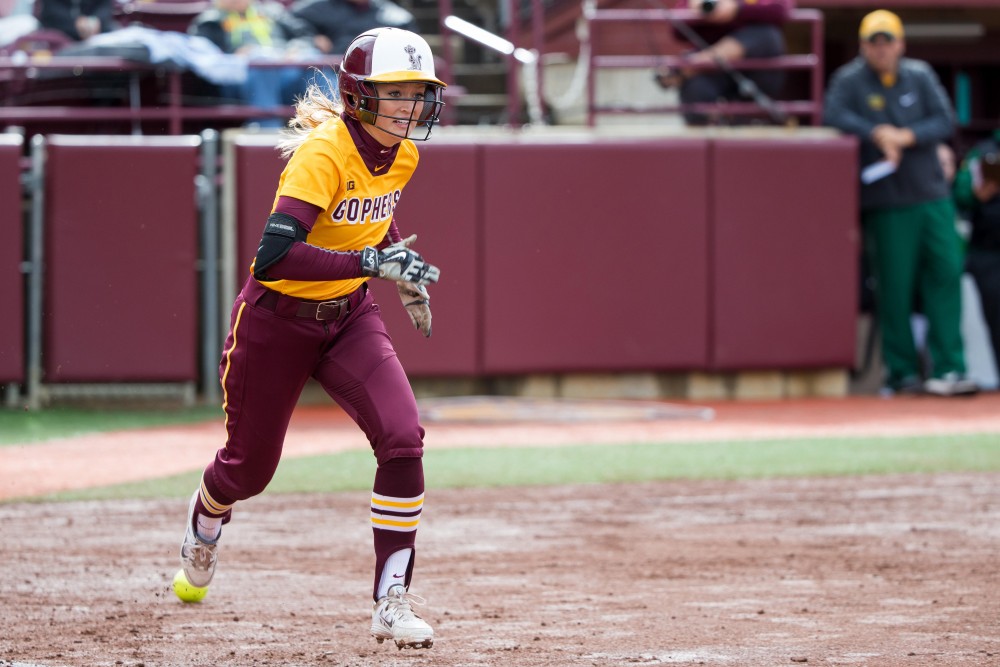 Freshman outfielder Ellee Jensen runs to first base in a game at Siebert Field.

It was business as usual for Minnesota in a doubleheader.

The Gophers tacked on two more victories against North Dakota State Tuesday in the final nonconference matchup of the season. Minnesota won the first game 3-0 and the second game 6-1 against its neighbors to the northwest.

The first game played out like many of Minnesota’s games earlier in the season — they kept their opponent scoreless and scored enough runs late in the game to win.

Both pitchers Jacquelyn Sertic for the Bison and Amber Fiser for the Gophers kept the a shutout through four innings, but Minnesota struck in the bottom of the fifth.

Left fielder Ellee Jensen reached on a single and catcher Kendyl Lindaman got on base with a fielder’s choice. Right fielder Maddie Houlihan provided the magic with a double to the left field wall, which scored both Jensen and Lindaman.

“It felt good, I was just making adjustments from the weekend,” Houlihan said. “Continuing to improve each and every at bat, learning from what other people were saying, just trying to put a good swing on a good pitch.”

The next at-bat, first baseman Sydney Dwyer hit a fly ball to shallow left field that dropped down for a hit. Houlihan came in for the third run. All of those hits happened with two outs in the inning.

The Gophers extended at-bats in many situations, especially fouling off balls. Sertic ended up with 109 pitches through six innings of work.

Minnesota jumped out to an early lead in the second game, thanks to a single down the first base line for Dwyer. The Gophers had a series of one-run innings beyond that.

“Swinging at strikes was a huge thing,” Dwyer said. “Just battle when you don’t get strikes.”

One run in the third and fourth innings gave the Gophers a slight lead of 3-0 after four innings. In the sixth inning, Houlihan continued her offensive surge with a three-run home run to right field.

Defensively, up until Tuesday’s second game, Minnesota had held opposing offenses at bay. In the fifth inning, North Dakota State scored one run, which marked the first time in over five games the Gophers allowed a run. Going back to the first game against Wisconsin last week, the Gophers went 38 consecutive innings without allowing a run.

Minnesota closed out the game and its nonconference schedule with the pair of victories. The Gophers play their last regular season series this weekend against Penn State at Jane Sage Cowles Stadium.

“We’re ready, we need a little bit of rest,” Trachsel said. “They’ve got finals, they’ve got late nights, so we’ll get some rest and keep working on the things we need to improve on.”