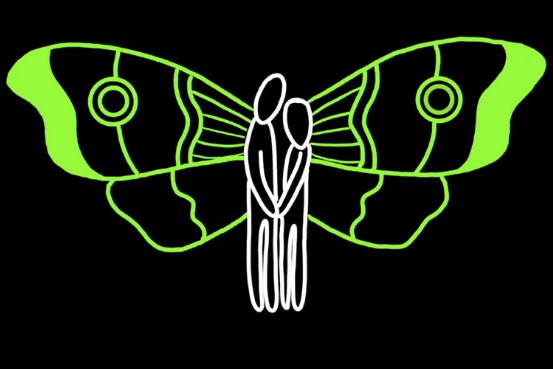 On a night out to the theater in the Twin Cities, you will find yourself among Shakespeares, Arthur Millers and Tennessee Williamses. However three University of Minnesota alumni want to present Australian playwright Declan Greene’s two-person play, “MOTH.”

Ben Lohrberg and Sophina Saggau, both graduates of the University and Guthrie BFA program, have been each other’s go-to creative collaborators since high school. During their senior year of college, they each produced a Freeplay Project as part of the program, but still found ways to work together.

“We got to explore something artistically in a really safe environment. So I think that was the first feeling of like, ‘Oh, we can do this and pull this off,’” Lohrberg said.

The two spent some time working on separate projects and plays but eventually felt like they were coming to a standstill. They wanted to do more. So, they talked about starting a theater company.

“Some of those projects weren’t what fueled me,” said Saggau, who will act as Claryssa in “MOTH.” “So why am I continuing to expend so much effort on this? So, I was kind of reaching that point a year out of school.”

Saggau and Lohrberg took a step back and decided to try their hand at co-producing first. They started searching for the perfect play and eventually landed on “MOTH.”

“It’s not like traditional storytelling elements,” Saggau said. “It’s not ‘Death of a Salesman;’ it’s not a lot of the classic stuff we did in our program. But the skills that we got from our program are absolutely going to be used.”

The play centers around two friends who are considered outcasts in their high school. After facing a troubling event, their friendship and their lives are changed as they begin to process their trauma.

“It’s like if you took somebody’s brain after they’ve experienced trauma and made that into a play,” Lohrberg said. “It’s like the feeling when you’re reliving trauma or when you’re trying to understand it more, and your mind is like, ‘What’s true? What isn’t true?’”

They started an Indiegogo campaign, raising $3,760 in 12 days and eventually putting them past their $3,500 goal. They also invited Luke Myers, a fellow graduate of the University of Minnesota and Guthrie’s BFA program, onto the project as Sebastian. Myers often worked with the two in college.

“The two of them have helped me figure out what sort of artist I want to be,” Myers said. “We already have a similar vocabulary of working together, and I know they understand where I’m coming from. I feel like I’m in a safe place to jump in and do some crazy and vulnerable stuff together.”

The rehearsal process hasn’t officially started, but the three have spent a lot of time on the phone developing the show and running lines. They use a horizontal leadership structure, where they’re all involved in making artistic decisions.

“The show is really about the power of storytelling,” Myers said. “The two of them enact each other’s memories, and you really get to see how hurt they are. Despite that, I’m always looking for the silver lining. It shows how important it is to be there for each other.”

Lohrberg, Saggau and Myers want to emphasize that the play comes with a content warning. It deals with traumatic events and the way in which our brains process them. However, they hope audience members can identify with the characters and feel a sense of healing.

“It’s the type of play where people will walk away being like, ‘What was that? What stuck with you?’” Saggau said. “I hope that it facilitates conversation or excites enough that people walk away wanting to talk to somebody about it.”

Ages: The show is ages 13+, and there is a suggested content warning for trauma