Minnesota recovered with a win against Nebraska. 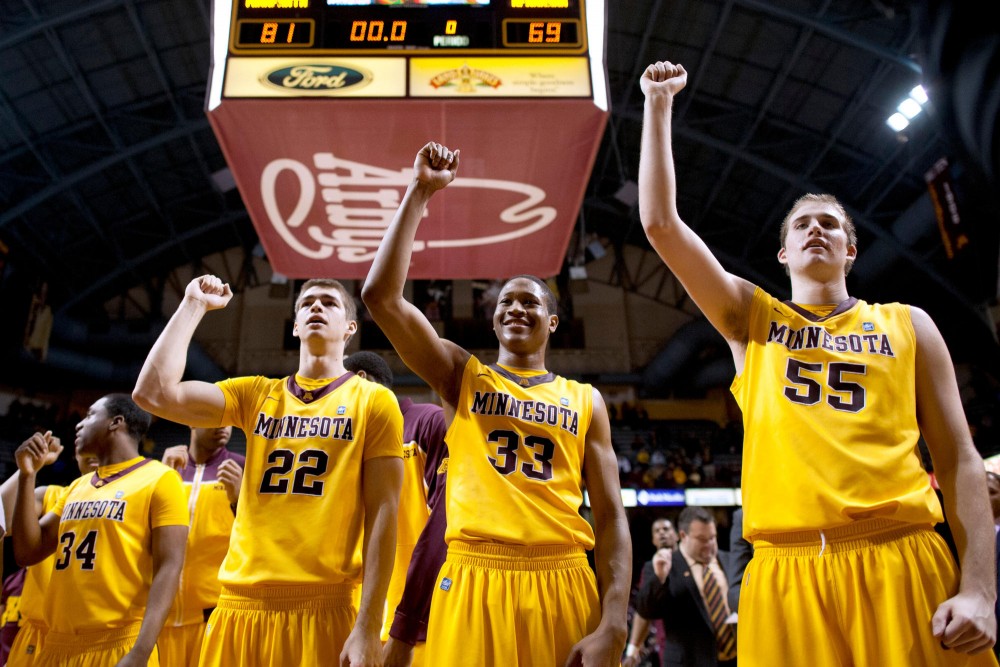 Gophers celebrate the win against Nebraska.

Minnesota and Nebraska took a reprieve from the typical Big Ten style of basketball during Senior Day at Williams Arena, and the Gophers capitalized. Minnesota set a conference season-high in points as it defeated the Huskers 81-69 to close out the Big Ten’s regular season.

The Big Ten is notorious for its slow, defensive-minded, low-scoring ways, but that style of play was nowhere to be found Saturday.

“We won the battle on the boards, took care of the basketball — all the things that you have to do to win,” head coach Tubby Smith said.

Minnesota also snapped a six-game losing streak during which it had scored just 56 points per game.

“I liked our entire team’s energy,” Smith said. “We came in needing a win. I think our fans saw a team that’s upbeat, and our future’s bright.”

Senior Ralph Sampson III had 12 points, five rebounds, four assists and two blocks in what could have been his last game at Williams Arena.

But it was Minnesota’s younger players who stole the show.

Junior Rodney Williams had 16 points, including three electrifying dunks. His first dunk — a poster slam over 6-foot-10 Brandon Ubel — came just before a 20-2 Gophers first-half run that turned the game in Minnesota’s favor.

“He scored 16 points and you’d think he ended up with 40,” Nebraska head coach Doc Sadler said of Williams.

Armelin and Hollins combined to make their first six 3-pointers in the first half, which helped Minnesota grab a 34-22 lead after it had trailed 20-14.

“[Armelin] had a great time out there shooting tonight,” Sampson said. “He was feeling it, and you try to ride that as long as possible.”

Armelin came off the bench in the first half but started the second half and finished with a season-high 30 minutes.

Smith said Armelin’s energy off the bench was an asset the team had lacked while it was losing.

“We haven’t had a guy that can get hot in the last six, seven games,” Smith said. “That’s what we needed. We need that [scoring] from anybody that comes off the bench or anybody that’s in the game.”

Minnesota was aided by a Huskers defense that allowed open 3-point attempts and uncontested drives to the basket throughout the game.

“I had to question how good our defense was,” Sadler said. “You’ve got to defend the 3-point shot better than we did.”

The Huskers’ Bo Spencer had 23 points, all of which came in the second half, including seven 3-pointers. The Gophers left Nebraska’s leading scorer open throughout the game, but they never paid the price as the Huskers frequently responded with an equally poor defensive play.

Minnesota tallied a conference season-high 23 assists in the win while committing 12 turnovers.

The Gophers’ offense will likely face a tougher test in the Big Ten tournament, which begins March 8. Minnesota, the 10th seed, will play seventh-seeded Northwestern in the first round.

The Wildcats (8-10 Big Ten) have caught fire after a poor start, but they will likely need to beat the Gophers to earn their first-ever NCAA tournament bid.

Northwestern defeated Minnesota 64-53 in Evanston, Ill., on Feb. 18 by utilizing a 1-3-1 zone defense that forced 19 turnovers.

A month earlier, the Gophers blew out the Wildcats 75-52 at Williams Arena.