The Beavers allowed 58 and 32 points in their first two games. 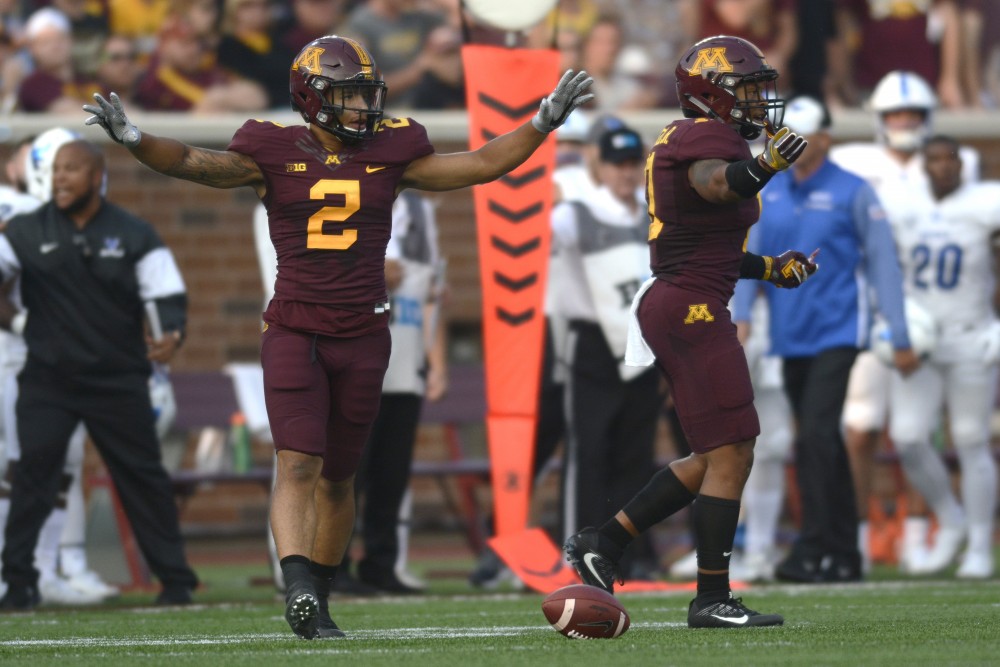 Defensive back Jacob Huff celebrates after swatting down a pass on Thursday, Aug. 31, 2017 at TCF Bank Stadium in Minneapolis. The Gophers beat Buffalo 17-7.

The opening game of Minnesota’s 9-4 season in 2016 came to a 30-23 win against Oregon State. Now, the Gophers will play the Beavers again Saturday evening.

While the Gophers’ offense was held to only 17 points against the 87th ranked defense of Buffalo last week in a 17-7 win, Minnesota (1-0) will have a chance to score more Oregon State (1-1).

The Gophers didn’t get nearly as many yards on the ground as the passing game did against Buffalo, but still have the two running backs with starting experience, Rodney Smith and Shannon Brooks.

Minnesota got 169 yards rushing last week against Buffalo, with most of the yards going to Smith, but both he and Brooks were relatively even, with 76 and 69 yards, respectively.

While the Gophers got only 150 yards in the game last season against the Beavers, Oregon State’s defense has been porous this season. In the team’s two games, they allowed 58 and 32 points.

When Oregon State runs the ball:

Running back Ryan Nall got both starts this season for the Beavers, and he’s averaging almost 90 yards per game, but Minnesota only allowed Buffalo 51 yards on the ground last week.

Minnesota’s linebacker group has the most depth on the defense, and the next best category would be the front of the defensive line, so the Gophers best situation is stopping the run.

The Beavers’ versatility of their three most used backs, plus a backup quarterback with some rushes, could pose a problem to Minnesota.

The Gophers passed for 239 yards last week, and a majority of those yards went to wide receiver Tyler Johnson.

Quarterback Conor Rhoda had the most chemistry with Johnson as a target, and his counterpart Demry Croft favored wide receiver Eric Carter.

Oregon State’s back end is reeling from the loss of a safety and a cornerback from last season, but has promise in some of the younger talent coming into the team. Safety Jalen Moore is the star of the core, and will make Minnesota’s receivers work very hard for passes and yards.

When Oregon State passes the ball:

Oregon State found a quarterback in Jake Luton, who has averaged around 270 yards passing per game.

The Beavers have a few receivers with six or more receptions so far this season, but the one at the top right now is tight end Noah Togiai. He has 162 receiving yards on the season and is the biggest threat to the Gophers’ defense.

The Gophers’ back end is missing some major pieces from last season, but Minnesota gave up 211 passing yards against Buffalo. The defense also stood tall when it counted, holding the Bulls to only seven points.

Minnesota has an opportunity to exploit the defense of Oregon State that has allowed 90 points in just two games, but still has to figure out the play with Smith and Brooks on the ground.