The sophomore outside hitter is first among returners in kills with 233. 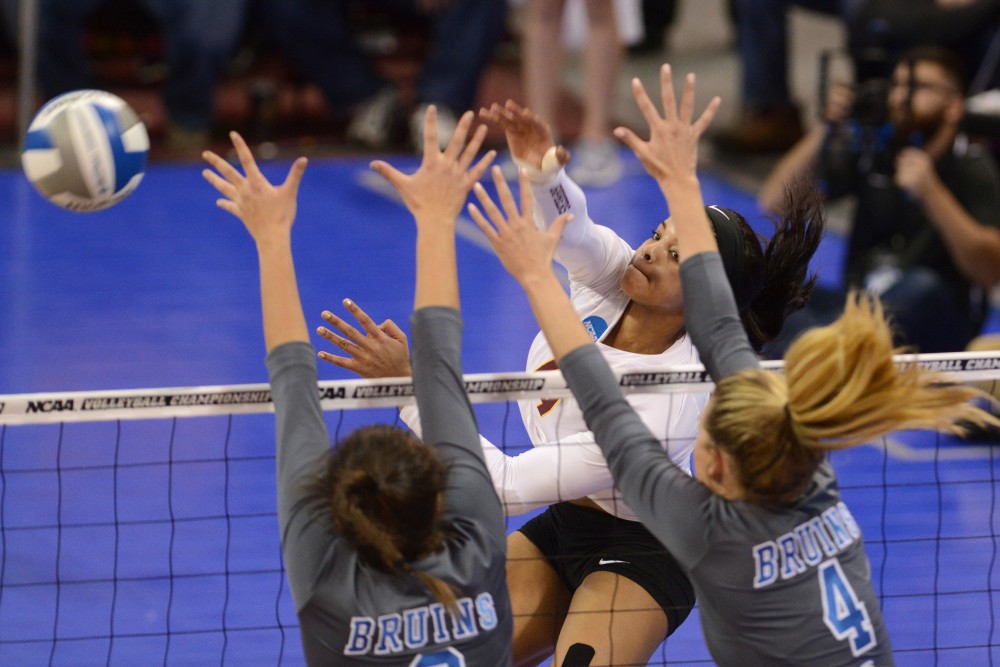 Outside hitter Alexis Hart pushes the ball past UCLA in the Sports Pavilion on Dec. 10, 2016.

After she won the most recent Big Ten Player of the Week award, one wouldn’t guess Alexis Hart only picked up volleyball in high school.

Hart set her high school’s record in long jump, and has since retooled those skills for the front of the line on the volleyball court.

“I started track when I was five years old,” Hart said. “I had done track longer, [but] when I started playing volleyball in high school I just fell in love with the sport.”

“She is very athletic, she’s very fast,” Seliger-Swenson said. “If she has to run down a ball, she is very quick to move.”

Only a sophomore, Hart has seen improvement in her statistics since last season. This year, the team has reaped the benefits of Hart’s .275 hitting percentage that has surpassed last year’s .242.

This past week, en route to being named Big Ten player of the week, Hart had 27 kills, which led the team, 4.50 kills per set and a .367 hitting percentage.

“[Hart has] definitely improved a lot,” Seliger-Swenson said. “She’s worked a lot in the offseason on her passing, in particular. She’s been learning a lot from [Dalianliz Rosado] and [Alyssa Goehner] and some of the older girls that have more experience.”

Another area of improvement has been on defense with digs. This year, Hart has almost caught up to her 83 digs last season, garnering 62 with 11 matches left to play. Much of that is attributed to a 0.95 digs per set percentage that has surpassed last year’s 0.66.

“She’s just improved in all aspects, playing-wise, and also as a leader,” Seliger-Swenson said.

Hart uses her speed when she hits the ball at the net. She said she’s unsure if she has always hit the ball with such force.

“During practice, it’s really hard to defend if you’re on the other side [of the net],” Seliger-Swenson said.

While Hart’s speed on her kills may separate her from the rest of her team, the outside hitter claims the hype from the sidelines doesn’t really strike her as anything different from when others get a kill.

“Honestly, I feel like if I just get a kill they will be like [excited],” Hart said. “Either way, I mean, it doesn’t matter.”

When asked how she characterized her style of play, Hart summed it in three words:

Hart and the Gophers look to sweep the regular season series against rival No. 8 Wisconsin when they play Saturday at the Maturi Pavilion.