U celebrates life of remarkable poet

Over the weekend, admirers from around the world celebrated what would have been John Berryman’s 100th birthday. 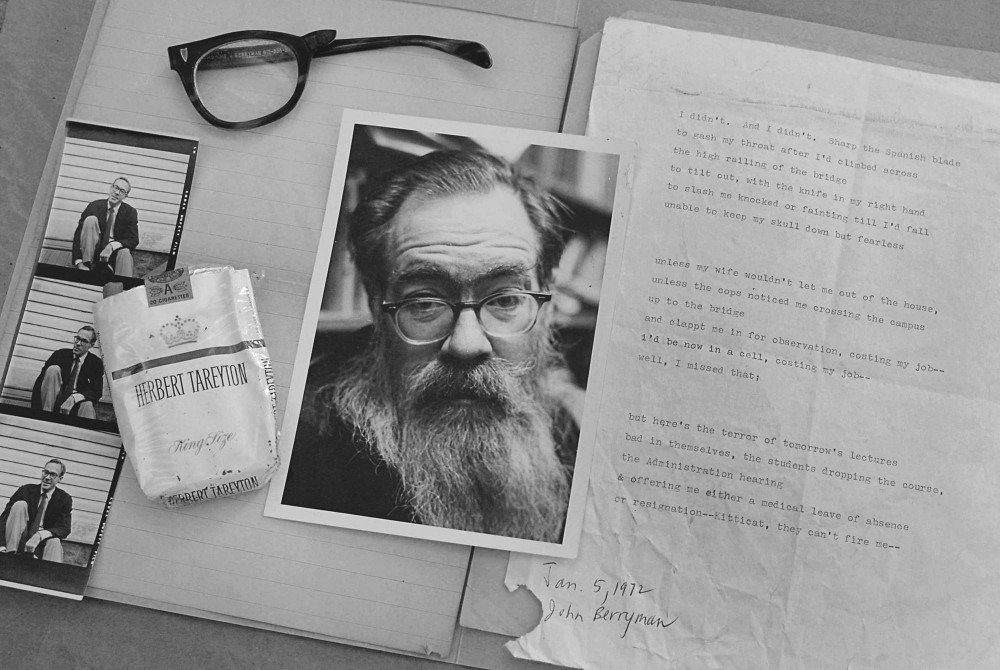 The items that were found with John Berryman after his suicide in the archives at the Elmer L. Andersen Library on West Bank. Berryman, a famed poet and professor at the U of M, published many critically acclaimed and still beloved poems before his suicide in 1972.

When he was a professor at the University of Minnesota, John Berryman’s lectures would often bring in a flood of students, moving them to tears.

Now, more than 40 years after his death, the Pulitzer Prize-winning poet’s lessons are still salient for both those who experienced them firsthand and for those who know the world-renowned scholar only through his writing.

The University held a conference over the weekend at the West Bank’s Andersen Library to honor the late poet’s legacy on what would have been his 100th birthday, letting Berryman admirers from around the world pay homage to both his work and his legacy.

“He was a great teacher here in addition to being a famous poet,” said Peter Campion, the  director of the University’s creative writing department and the conference’s chair.

Berryman taught at the University from 1955 until his death in 1972, when he committed suicide by jumping off the Washington Avenue Bridge.

Campion said celebrating Berryman’s birthday and legacy shows the timeless impact he has at the University and around the world.

“I don’t think you can go anywhere where American poetry is read in the world and not bring up Berryman,” he said.

Harvard University graduate student Calista McRae said she had been looking forward to the conference for more than a year.

She said the Berryman’s “77 Dream Songs,” for which he won a Pulitzer Prize in 1965, is her favorite poetry book.

The fifth-year English graduate student, who is writing about Berryman for her dissertation, said she loved the humor threaded into his writing and the unexpected elements within each of his poems.

Berryman’s poetry style is commonly categorized as confessional, but his work also delved into history, politics and what it meant to be an American in the post-war era.

“He was struck by lightning quite a few times,” Browne said.

Houston Community College-Northeast art professor Tina Kotrla said she wept when she first read drafts of Berryman’s work at a University of Minnesota library this week.

Philip Coleman also traveled a great distance to come to the conference, which he helped organize.

The Trinity College Dublin professor is a premier scholar of Berryman’s work, extensively studying it for well over a decade.

Though many view Berryman as the award-winning poet who tragically took his life, Coleman said, he should also be remembered for his important contributions as an artist and a scholar.

“When we read him only as the poet who jumped off the bridge, we’re only getting a small part of who he was,” Coleman said. “This was a human being who made art and taught for living.”

Berryman’s third wife and widow, Kate Donahue, attended the conference and said she was pleased to see people celebrating Berryman’s life and work, rather than focusing on his demons, which included deep depression and struggles with alcoholism.

“It’s very comforting to be here in the presence with people who care about and care for John Berryman,” she said.

A former student of his, Mike Rivard, said Berryman was an empathetic professor who was aware that like him, his students also faced hardships.

“Berryman had this sense that people were dealing with personal challenges,” he said.

Donahue said Berryman would often bring home half a dozen students at the end of class to continue their conversations, and she would have to ask students to leave when it got close to suppertime.

Jim Moore, another former Berryman student who’s now a published poet in Minneapolis, said what was most inspiring about Berryman wasn’t necessarily his poetry, but his overwhelming passion for the art form — whether it was his own or his students’ work.

“He found so much in the work,” Moore said.

Berryman would allow students who weren’t enrolled in his classes to sit in on his lectures, Campion said, which would sometimes be so full that the students had to stand.

Like his memorable lectures, the end of the weekend’s conference brought some to tears as they reminisced about Berryman’s influence as a professor, poet and friend.

“It’s a help to have the feeling that he’s very solidly established and not forgotten,” Donahue said.